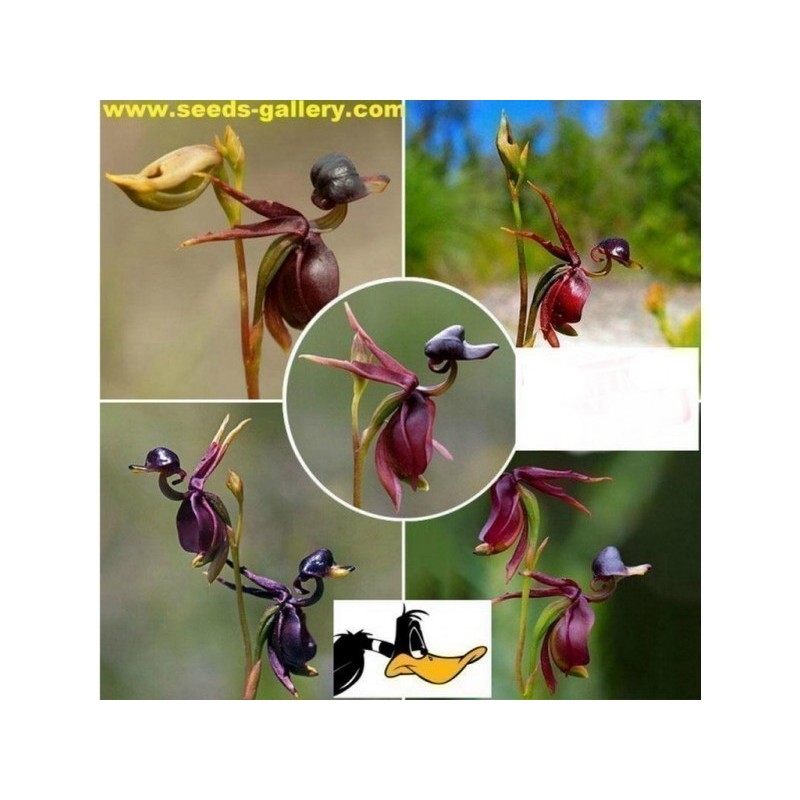 Caleana major, the flying duck orchid, is a small orchid found in eastern and southern Australia. This terrestrial plant features a remarkable flower, resembling a duck in flight. The flower is an attractant to

Caleana major, the flying duck orchid, is a small orchid found in eastern and southern Australia.

This terrestrial plant features a remarkable flower, resembling a duck in flight. The flower is an attractant to insects, such as male sawflies which pollinate the flower in a process known as pseudocopulation. In 1986 this orchid was featured on an Australian postage stamp.

Caleana major is encountered as a terrestrial herb, up to 50 centimetres (20 in) tall. Two to four flowers grow on the green stem. The single leaf, appears near the base of the stalk. It is usually prostrate, narrowly lanceolate, to 12 cm (5 in) long and 8 mm (0.3 in) wide, often spotted. The flower is reddish brown, 15–20 mm (0.6–0.8 in) long. In rare cases, the flower can be greenish with dark spots. The plant is pollinated by insects. A sensitive strap is attached to the flower, which is triggered by vibration. Flowering occurs from September to January.

Occurring from Queensland to South Australia, to even Tasmania, this plant is found in eucalyptus woodland in coastal or swampy shrubland and heathland. Mostly near the coast, but occasionally at higher altitudes. Because of the small size, it is a difficult plant to notice in the wild.

The genus Caleana was named after George Caley, an early botanical collector. As of May 2014, Caleana major is the onle species in the genus; two other species (C. minor and C. nigrita) formerly included in this genus are now regarded as members of a different genus, Paracaleana. Latin for "larger", major refers to the contrast with the other, smaller duck orchid, Paracaleana minor.

The original specimen of this plant was collected at Bennelong Point, the present-day site of the Sydney Opera House in September, 1803. In 1810, the species originally appeared in the scientific literature, Prodromus Florae Novae Hollandiae, authored by the prolific Scottish botanist Robert Brown.

To germinate and grow the seeds of orchids need the presence of a microscopic fungus that lives in symbiosis with a little plant. This fungus fixed nitrogen from the air and converts readable form for the plant (just as in legumes). Without this symbiosis, the seeds will not grow. The safest way to provide this mushroom seeds is to sow directly in front of an orchid. This technique is the easiest and least expensive.