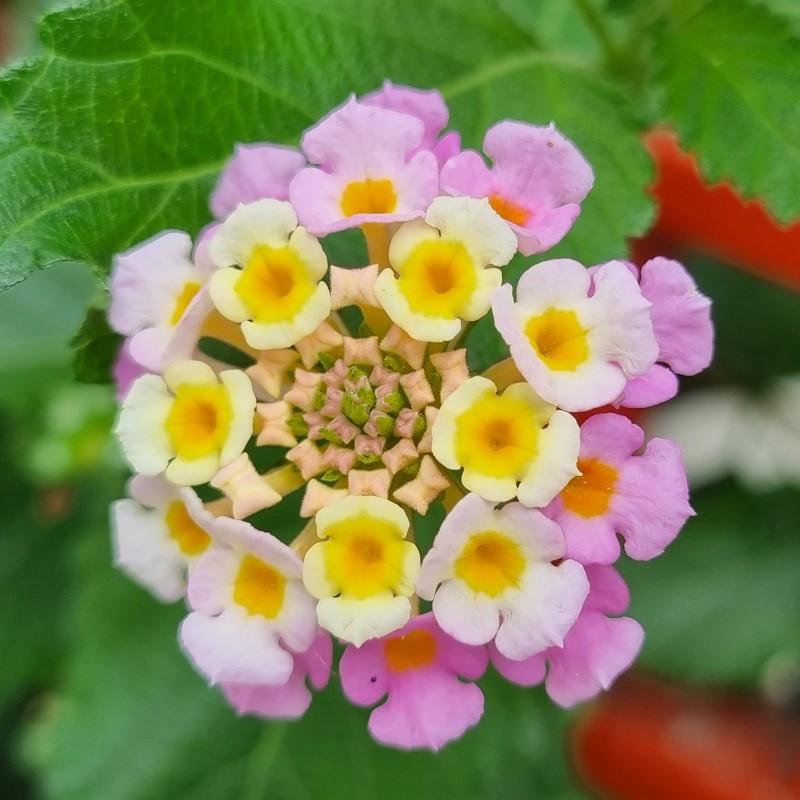 As an ornamental, L. camara is often cultivated indoors, or in a conservatory, but can also thrive in a garden with sufficient shelter in cooler climates.[9] It has spread from its native Central and South America to around 50 countries,[10] where it has become an invasive species.[11][12] It first spread out of the Americas when it was brought to Europe by Dutch explorers and cultivated widely, soon spreading further into Asia and Oceania where it has established itself as a notorious weed, and in Goa it was introduced by the Portuguese.[11]

L. camara can outcompete native species, leading to a reduction in biodiversity.[13] It can also cause problems if it invades agricultural areas as a result of its toxicity to livestock, as well as its ability to form dense thickets which, if left unchecked, can greatly reduce the productivity of farmland.

Lantana camara is a perennial, erect sprawling or scandent, shrub which typically grows to around 2 m tall and form dense thickets in a variety of environments. In the right conditions though, it can scramble up into trees and can grow to 6 metres tall. Due to extensive selective breeding throughout the 17th and 18th Centuries for use as an ornamental plant, there are now many different L. camara cultivars.

L. camara has small tubular shaped flowers, which each have four petals and are arranged in clusters in terminal areas stems. Flowers come in many different colours, including red, yellow, white, pink and orange, which differ depending on location in inflorescences, age, and maturity.[17] The flower has a tutti frutti smell with a peppery undertone. After pollination occurs, the colour of the flowers changes (typically from yellow to orangish, pinkish, or reddish); this is believed to be a signal to pollinators that the pre-change colour contains a reward as well as being sexually viable, thus increasing pollination efficiency.[18]

The leaves are broadly ovate, opposite, and simple and have a strong odour when crushed.[19]

The fruit of L. camara is a berry-like drupe which turns from green to dark purple when mature. Green unripe fruits are inedible to humans and animals alike. Because of dense patches of hard spikes on their rind, ingestion of them can result in serious damage to the digestive tract. Both vegetative (asexual) and seed reproduction occur. Up to 12,000 fruits can be produced by each plant[20] which are then eaten by birds and other animals which can spread the seeds over large distances, facilitating the spread of L. camara.

The native range of Lantana camara is Central and South America; however, it has become naturalised in around 60 tropical and sub-tropical countries worldwide.[21][22] It is found frequently in east and southern Africa, where it occurs at altitudes below 2000 m, and often invades previously disturbed areas such as logged forests and areas cleared for agriculture.


L. camara has also colonized areas of Africa, Southern Europe, such as Spain and Portugal, and also the Middle East, India, tropical Asia, Australia, New Zealand, and the US, as well as many Atlantic, Pacific and Indian Ocean islands.[24][25] It has become a significant weed in Sri Lanka after escaping from the Royal Botanic gardens in 1926.[26][27]

It was introduced into the Philippines from Hawaii as part of an exchange program between the United States and the Philippines; however, it managed to escape and has become naturalized in the islands.[28] It has also been introduced to the whole southern US, from California to North Carolina,[29] and is considered hardy in USDA zones 10 and 11.[30]

The range of L. camara is still increasing, shown by the fact that it has invaded many islands on which it was not present in 1974, including the Galapagos Islands, Saipan and the Solomon Islands.[25] There is also evidence that L. camara is still increasing its range in areas where it has been established for many years, such as East Africa, Australia and New Zealand.[10] The ability of L. camara to rapidly colonise areas of land which have been disturbed has allowed it to proliferate in countries where activities such as logging, clearance for agriculture and forest fires are common. In contrast, in countries with large areas of intact primary forest, the distribution of L. camara has been limited.

Lantana camara is found in a variety of environments, including:

L. camara is rarely found in natural or semi-natural areas of forest, as it is unable to compete with taller trees due to its lack of tolerance for shade. Instead, it grows at the forest edge. L. camara can survive in a wide range of climatic conditions, including drought, different soil types, heat, humidity, and salt. It is also relatively fired tolerant and can quickly establish itself in recently burnt areas of forest. 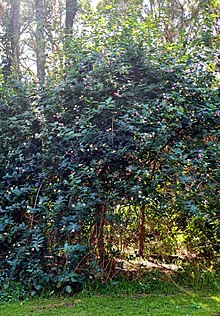 L. camara is considered to be a weed in large areas of the Paleotropics where it has established itself. In agricultural areas or secondary forests it can become the dominant understorey shrub, crowding out other native species and reducing biodiversity.[7] The formation of dense thickets of L. camara can significantly slow down the regeneration of forests by preventing the growth of new trees.[4]

In the US, L. camara is considered invasive in tropical areas such as Florida and Hawaii.[29]

Although L. camara is itself quite resistant to fire, it can change fire patterns in a forest ecosystem by altering the fuel load, causing a buildup of forest fuel, which itself increases the risk of fires spreading to the canopy.[33] This can be particularly destructive in dry, arid areas where fire can spread quickly and lead to the loss of large areas of natural ecosystem.

L. camara reduces the productivity in pasture through the formation of dense thickets, which reduce growth of crops as well as make harvesting more difficult. There are also secondary impacts, including the finding that in Africa, mosquitos which transmit malaria and tsetse flies shelter within the bushes of L. camara.[34]

Even though L. camara is considered invasive to the Western Ghats, the plant does not seem to impact biodiversity in the region; rather it tends to simply occupy the same moist regions as other species.[35]

There are many reasons why L. camara has been so successful as an invasive species; however, the primary factors which have allowed it to establish itself are:

Lantana camara is known to be toxic to livestock such as cattle, sheep, horses, dogs and goats.[37][38] The active substances causing toxicity in grazing animals are pentacyclic triterpenoids, which result in liver damage and photosensitivity.[39] L. camara also excretes allelopathic chemicals, which reduce the growth of surrounding plants by inhibiting germination and root elongation.[40]

The toxicity of L. camara to humans is undetermined, with several studies suggesting that ingesting berries can be toxic to humans, such as a study by O P Sharma which states "Green unripe fruits of the plant are toxic to humans".[41] NC State's Extension Gardener website states that ingestion of the flowers, fruits, and leaves can cause vomiting, diarrhea, difficulty breathing, and liver failure, while the leaves can cause contact dermatitis.[42] However, other studies have found evidence which suggests that L. camara fruit poses no risk to humans when eaten, and is in fact edible when ripe.[43][44]

Effective management of invasive L. camara in the long term will require a reduction in activities that create degraded habitats. Maintaining functioning (healthy) ecosystems is key to preventing invasive species from establishing themselves and out-competing native fauna and flora.

Insects and other biocontrol agents have been implemented with varying degrees of success in an attempt to control L. camara. It was the first weed ever subjected to biological control; however, none of the programs have been successful despite 36 control agents being used across 33 regions.[45]

The lack of success using biological control in this case is most likely due to the many hybrid forms of L. camara, as well as its large genetic diversity which makes it difficult for the control agents to target all plants effectively. A recent study in India has shown some results around biological control of this plant using tingid bugs.[46]

Mechanical control of L. camara involves physically removing the plants. Physical removal can be effective but is labor-intensive and expensive, therefore removal is usually only appropriate in small areas or at the early stages of an infestation. Another method of mechanical control is to use fire treatment, followed by revegetation with native species.

Using herbicides to manage L. camara is very effective but also expensive, prohibiting its use in many poorer countries where L. camara is well established. The most effective way of chemically treating plant species is to first mow the area, then spray the area with a weed-killer, although this may have serious environmental consequences. 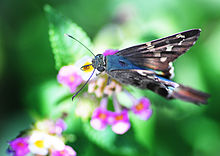 Lantana camara stalks have been used in the construction of furniture, such as chairs and tables; however, the main uses have historically been medicinal and ornamental.

Studies conducted in India have found that Lantana leaves can display antimicrobial, fungicidal, and insecticidal properties. L. camara has also been used in traditional herbal medicines for treating a variety of ailments, including cancer, skin itches, leprosy, chickenpox, measles, asthma, and ulcers.[4]

L. camara extract has been shown to reduce gastric ulcer development in rats.[49] Extracts from the plant have also been used in Brazil to treat respiratory infections.[50]

Lantana camara has been grown specifically for use as an ornamental plant since Dutch explorers first brought it to Europe from the New World.[4] Its ability to last for a relatively long time without water, and the fact that it does not have many pests or diseases which affect it, have contributed to it becoming a common ornamental plant. L. camara also attracts butterflies and birds and is frequently used in butterfly gardens.[5]

The name Lantana derives from the Latin name of the wayfaring tree Viburnum lantana, the flowers of which closely resemble Lantana.[11][53]

Camara is derived from Greek, meaning ‘arched’, ‘chambered’, or ‘vaulted’.