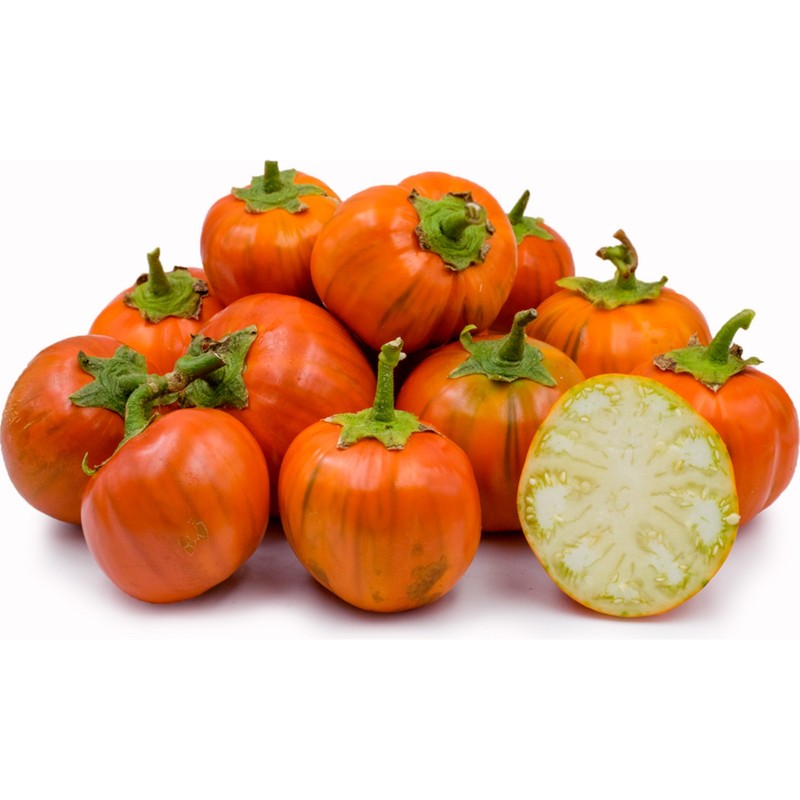 Solanum aethiopicum, the bitter tomato, Ethiopian eggplant, or nakati, is a fruiting plant of the genus Solanum mainly found in Asia and Tropical Africa. It is also known as Ethiopian

Solanum aethiopicum, the bitter tomato, Ethiopian eggplant, or nakati, is a fruiting plant of the genus Solanum mainly found in Asia and Tropical Africa. It is also known as Ethiopian nightshade, garden eggs, and mock tomato. It is a popular vegetable in north-east India, and is known as khamen akhaba in Manipuri and samtawk in Mizo. They are called Titay bii or simply bii in Darjeeling, Sikkim and Nepal and are relished with meat, particularly pork. These names are a result of its varied morphology, with ripe fruit often looking like a cross between an eggplant and a tomato, which are also from Solanum. In fact, the Ethiopian eggplant was so much confused with the ordinary eggplant that this was considered by some a variety violaceum of S. aethiopicum.

Ethiopian eggplant may have originated from the domestication of Solanum anguivi. The scarlet eggplant, also known as Gilo or jiló, was long held to be a distinct species (S. gilo) but is nowadays generally considered to be a cultivar group of S. aethiopicum.

The leaves of Solanum aethiopicum are eaten as a leaf vegetable and are actually more nutritious than the fruit.

The highly variable fruit of the plant is eaten both raw and cooked and is becoming more popular as a cultivated crop. These fruits are usually harvested while still green, before the skin becomes thick. The bitterness depends on the levels of saponin it contains, some with a sweet flavor and others very bitter. When the berries mature, they turn bright red because of high carotene content.

Solanum aethiopicum is used as an ornamental in Asia.

In Nigeria, Igbo people use it as a substitute for kolanut especially for those who do not want to chew kolanut. In which case it is used to welcome guests at home or before resumption of a traditional ceremony.

Currently there is a large movement towards increased cultivation of Solanum aethiopicum in West Africa. It grows all year long and can produce high fruit yields. However, low germination rates are an obstacle to wider cultivation. 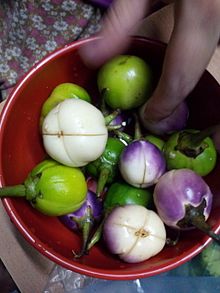 Fruits of bitter tomato ready for cooking in northeast India

The only place where S. aethiopicum is grown to a significant extent in Europe lies in South Italy, to be precise in Rotonda in the Basilicata, where this plant is of some commercial importance. Probably it was introduced by veterans returning from East Africa after the colonial war in the late 19th century.

The fruits of this variety are about two inches in diameter and turn bright orange-red when ripe, although they are usually eaten when still green. The sweet taste is often used in Thai curry. It can produce fruit within just 75 days after planting.

These striped fruits, just 1 inch in diameter, have a strong but non-bitter flavor. The plant is thornless and grows up to 3 feet tall and can produce fruit 125 days after planting.

The two-inch berries of the 'Hmong Red' have deep creases and a bitter flavor used in Southeast Asian cooking. It can produce fruit 100 days after planting.