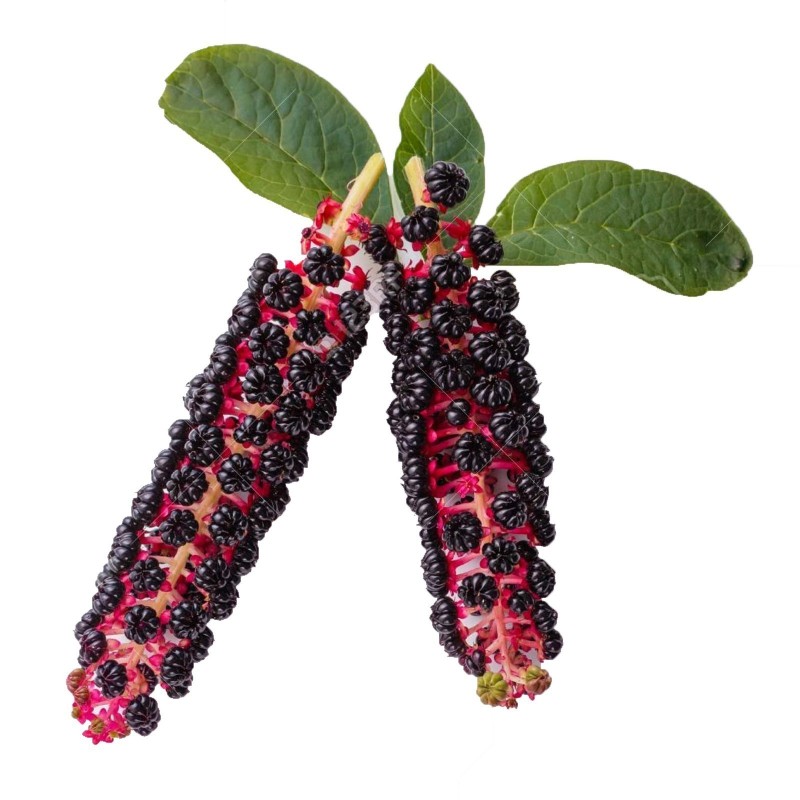 Here is your opportunity to purchase fresh seed of this variegated form of this unusual perennial plant. A bushy plant with large green leaves, marbled with white and creamy-yellow,

Phytolacca americana, also known as American pokeweed, pokeweed, poke sallet, or poke salad, is a poisonous, herbaceous perennial plant in the pokeweed family Phytolaccaceae growing up to 8 ft (2.4m) in height. It has simple leaves on green to red or purplish stems and a large white taproot. The flowers are green to white, followed by purple to almost black berries which are a food source for songbirds such as gray catbird, northern mockingbird, northern cardinal, and brown thrasher, as well as other birds and some small animals (i.e., to species that are unaffected by its mammalian toxins).

Pokeweed is native to eastern North America, the Midwest, and the Gulf Coast, with more scattered populations in the far West. It is also naturalized in parts of Europe and Asia. It is considered a pest species by farmers.[not verified in body] Additionally, pokeweed poses a danger to human and animal populations via poisoning; with toxicity levels increasing as the plant matures, and with poisonous fruit. The young leaves can be made edible by proper cooking. It is used as an ornamental in horticulture, and it provokes interest for the variety of its natural products (toxins and other classes), for its ecological role, its historical role in traditional medicine, and for some utility in biomedical research (e.g., in studies of pokeweed mitogen). In the wild, it is easily found growing in pastures, recently cleared areas, and woodland openings, edge habitats such as along fencerows, and in wastelands. 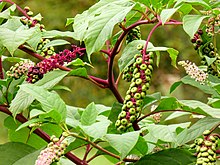 Pokeweed is a member of the Phytolaccaceae, or broader pokeweed family, and is a native herbaceous perennial plant, that is large, growing up to 8 feet (2 meters) in height. One to several branches grow from the crown of a thick, white, fleshy taproot, each a "stout, smooth, green to somewhat purplish stem;" with simple, entire leaves with long petioles alternately arranged along the stem.

Pokeweeds reproduce only by their seeds (large glossy black, and lens-shaped), contained in a fleshy, 10-celled, purple-to-near-black berry with crimson juice. The flowers are perfect, radially symmetric, white or green, with 4-5 sepals and no petals. The flowers develop in elongated clusters termed racemes. The seeds have a long viability and can germinate after many years in the soil.

Birds are unaffected by the natural chemicals contained in the berries (see below), and eat them, dispersing the seeds. Seed are also found in commercial seed (e.g., vegetable seed packets). The berries are reported to be a good food source for songbirds and other bird species and small animals unaffected by its toxins. Distribution via birds is thought to account for the appearance of isolated plants in areas that had otherwise not been populated by pokeweed.

All parts of the plant are toxic and pose risks to human and mammalian health. In summary, the poisonous principles are found in highest concentrations in the rootstock, then in leaves and stems and then in the ripe fruit. The plant generally gets more toxic with maturity, with the exception of the berries (which have significant toxicity even while green).

Children may be attracted by clusters of berries. Ohio Agricultural Research and Development Center (OARDC) note that

Children are most frequently poisoned by eating raw berries. Infants are especially sensitive and have died from eating only a few raw berries. Adults have been poisoned, sometimes fatally, by eating improperly prepared leaves and shoots, especially if part of the root is harvested with the shoot, and by mistaking the root for an edible tuber. Research with humans has also shown that common pokeweed can cause mutations (possibly leading to cancer) and birth defects. Since the juice of pokeweed can be absorbed through the skin, contact of plant parts with bare skin should be avoided.

Pokeweed is to be avoided during pregnancy and children consuming even one berry may require emergency treatment. The plant sap can cause dermatitis in sensitive people.

Human deaths resulting from pokeweed consumption are uncommon, but cases of emesis and catharsis are known,[citation needed] and a child who consumed crushed seeds in a juice is reported to have died.[citation needed] If death occurs, it is usually due to respiratory paralysis.

Historically, pokeweed poisonings were common in eastern North America during the 19th century, especially from the use of tinctures as antirheumatic preparations and from ingestion of berries and roots that were mistaken for parsnip, Jerusalem artichoke, or horseradish.

Symptoms and response to poisoning

If taken internally, pokeweed is a slow acting but a violent emetic. Vomiting usually starts about 2 hours after the plant or parts of it have been eaten. Severe cases of poisoning result in purging, spasms, and sometimes convulsions. If death occurs, it is usually due to paralysis of the respiratory organs. Cases of animal or human poisoning should be handled by a veterinarian or a physician.

The OARDC staff scientists note that immediate and subsequent symptoms of poisoning from pokeweed include "a burning sensation in the mouth, salivation, gastrointestinal cramps, and vomiting and bloody diarrhea", and that depending upon the amount consumed, more severe symptoms can occur, including "anemia, altered heart rate and respiration, convulsions and death from respiratory failure."[10] If only small quantities of the plant or its extracts are ingested, people and animals may recover within one to two days.[10][16]

Pokeweed is native to eastern North America, the Midwest, the Gulf Coast, and the West coast states of the USA.[17] 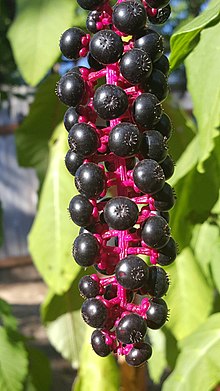 A cluster of Pokeweed berries

Plant Type: Perennial herbaceous plant which can reach a height of 10 feet (3 meters), but is usually 4 ft (1.2 m) to 6 ft (2 m). However, the plant must be a few years old before the root grows large enough to support this size. The stem is often red as the plant matures. There is an upright, erect central stem early in the season, which changes to a spreading, horizontal form later in the season with the weight of the berries. Plant dies back to roots each winter. Stem has a chambered pith.

Leaves: The leaves are alternate with coarse texture with moderate porosity. Leaves can reach sixteen inches in length. Each leaf is entire. Leaves are medium green and smooth with what some characterize as an unpleasant odor.

Flowers: The flowers have 5 regular parts with upright stamens and are up to 0.2 inches (5 mm) wide. They have white petal-like sepals without true petals, on white pedicels and peduncles in an upright or drooping raceme, which darken as the plant fruits. Blooms first appear in early summer and continue into early fall.

Fruit: A shiny dark purple berry held in racemose clusters on pink pedicels with a pink peduncle. Pedicels without berries have a distinctive rounded five part calyx. Fruits are round with a flat indented top and bottom. Immature berries are green, turning white and then blackish purple.

Various sources discuss notable chemical constituents of the plant. Owen of Iowa State University notes that the "entire pokeweed plant contains a poisonous substance similar to saponin" and that the "alkaloid phytolaccine also occurs in small amounts." Heller at the National Library of Medicine notes the two natural products, the alkaloid phytolaccatoxin and phytolaccagenin, as contributing to human poisoning. The Canadian Poisonous Plants Information System echoes the information about phytolaccine and phytolaccatoxin.

Other than starch and various tannins, other small molecule natural products isolated from pokeweed include canthomicrol, astragalin, and caryophyllene. Seeds contain the phenolic aldehyde caffeic aldehyde.

Proteins of interest include various lectins, protein PAP-R, and pokeweed mitogen (PWM),[citation needed] as well as a toxic glycoprotein.

Pokeweed is used as a sometime food source by the larvae of some Lepidoptera species, including the giant leopard moth (Hypercompe scribonia).

Some pokeweeds are grown as ornamental plants, mainly for their attractive berries. A number of cultivars have been selected for larger fruit panicles.

Owen notes that "Indians and early settlers used the root in poultices and certain drugs for skin diseases and rheumatism."

Pokeweed is promoted in alternative medicine as a dietary supplement that can treat a wide range of maladies including mumps, arthritis and various skin conditions.[28] While pokeweed has been subject to laboratory research, there is no medical evidence that it has any beneficial effect on human health. 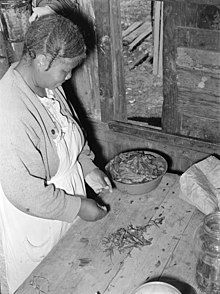 Poke is a traditional southern Appalachian food. The leaves and stems of very young plants can both be eaten, but must be cooked, usually boiled three times in fresh water each time. The leaves have a taste similar to spinach; the stems taste similar to asparagus. To prepare stems, harvest young stalks prior to chambered pith formation, carefully peel the purple skin away, then chop the stalk up and fry in meal like okra. A typical recipe for preparation of pokeweed leaves is to remove the leaves from the plant, rinse the leaves in cool water, bring the leaves to a rolling boil in a large pot about 20 minutes, pour the leaves into a sieve (discarding the cooking water), rinse them in cool water, repeat the boiling and the rinsing at least two more times, panfry the leaves in bacon grease for a couple of minutes, add bacon, and salt & pepper to taste.

The root is never eaten and cannot be made edible, but a late 19th century herbal, the King's American Dispensatory, describes various folk medical uses that led individuals to ingest pokeberry products, and festivals still celebrate the plant's use in its historical food preparations (see below).

Plant toxins from Phytolacca are being explored as a means to control zebra mussels.

The toxic extract of pokeweed berries can be processed to yield a red ink or dye.

During the middle of the 19th century wine often was coloured with juice from pokeberries.