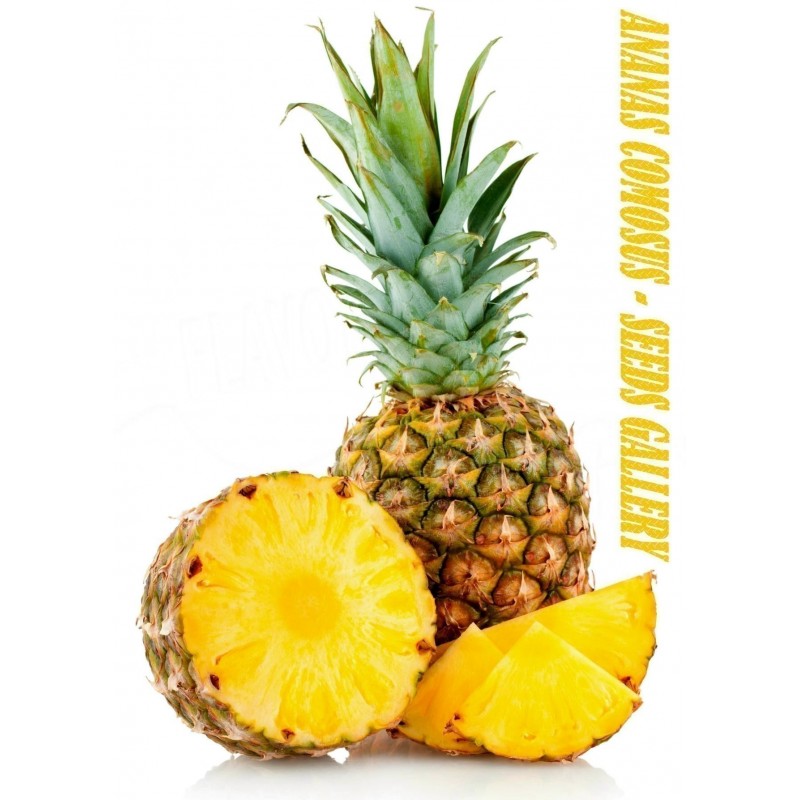 3,50 €
Ananas Seeds "pineapple"(Ananas comosus)
Price for Package of 4 seeds.
Pineapple (Ananas comosus), a tropical plant with edible multiple fruit consisting of coalesced berries,[1] named for resemblance to the pine cone,[2] is the most economically important plant in the Bromeliaceae family.[3] Pineapples may be cultivated from a crown cutting of the fruit,[4] possibly flowe

Price for Package of 4 seeds.

Pineapple (Ananas comosus), a tropical plant with edible multiple fruit consisting of coalesced berries,[1] named for resemblance to the pine cone,[2] is the most economically important plant in the Bromeliaceae family.[3] Pineapples may be cultivated from a crown cutting of the fruit,[4] possibly flowering in 20–24 months and fruiting in the following six months.[4][5]
Pineapple may be consumed fresh, canned, juiced, and are found in a wide array of food stuffs – dessert, fruit salad, jam, yogurt, ice cream, candy, and as a complement to meat dishes. In addition to consumption, in the Philippines the pineapple's leaves are used as the source of a textile fiber called piña, and is employed as a component of wall paper and furnishings, amongst other uses.
The word "pineapple" in English was first recorded in 1398, when it was originally used to describe the reproductive organs of conifer trees (now termed pine cones). The term "pine cone" for the reproductive organ of conifer trees was first recorded in 1694. When European explorers discovered this tropical fruit, they called them "pineapples" (first so referenced in 1664 due to resemblance to what is now known as the pine cone).[7]
In the scientific binomial Ananas comosus, ananas, the original name of the fruit, comes from the Tupi word nanas, meaning "excellent fruit",[8] as recorded by André Thevet in 1555, and comosus, "tufted", refers to the stem of the fruit. Other members of the Ananas genus are often called "pine", as well, by laymen.
Many languages use the Tupian term ananas. In Spanish, pineapples are called piña "pine cone" in Spain and most Hispanic American countries, or ananá (ananás in Argentina) (see the piña colada drink). They have varying names in the languages of India: ananas (अननस)[9] in Marathi, anaasa(అనాస) in Telugu, Sapuri-PaNasa (ସପୁରି ପଣସ) in Oriya language, annachi pazham (Tamil), anarosh (Bengali), and in Malayalam, kaitha chakka. In Malay, pineapples are known as nanas or nenas. In the Maldivian language of Dhivehi, pineapples are known as alanaasi. A large, sweet pineapple grown especially in Brazil is called abacaxi [abakaˈʃi]. Along the Swahili-speaking coast of East Africa, the fruit is known as nanasi.
Botany
A pineapple flower in Iriomote, Japan
The pineapple is a herbaceous perennial which grows to 1.0 to 1.5 meters (3.3 to 4.9 ft) tall, although sometimes it can be taller. In appearance, the plant itself has a short, stocky stem with tough, waxy leaves. When creating its fruit, it usually produces up to 200 flowers, although some large-fruited cultivars can exceed this. Once it flowers, the individual fruits of the flowers join together to create what is commonly referred to as a pineapple. After the first fruit is produced, side shoots (called 'suckers' by commercial growers) are produced in the leaf axils of the main stem. These may be removed for propagation, or left to produce additional fruits on the original plant.[4] Commercially, suckers that appear around the base are cultivated. It has 30 or more long, narrow, fleshy, trough-shaped leaves with sharp spines along the margins that are 30 to 100 centimeters (1.0 to 3.3 ft) long, surrounding a thick stem. In the first year of growth, the axis lengthens and thickens, bearing numerous leaves in close spirals. After 12 to 20 months, the stem grows into a spike-like inflorescence up to 15 cm (6 in) long with over 100 spirally arranged, trimerous flowers, each subtended by a bract. Flower colors vary, depending on variety, from lavender, through light purple to red.
The ovaries develop into berries which coalesce into a large, compact, multiple accessory fruit. The fruit of a pineapple is arranged in two interlocking helices, eight in one direction, thirteen in the other, each being a Fibonacci number.[10]
Pineapple carries out CAM photosynthesis, fixing carbon dioxide at night and storing it as the acid malate and then releasing it during the day, aiding photosynthesis.
V 8