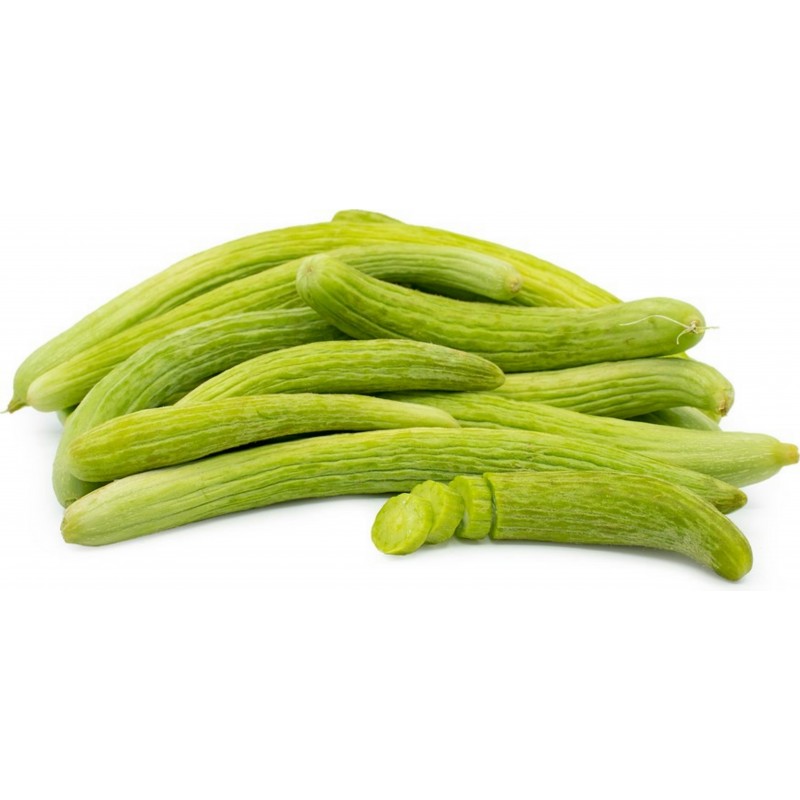 65 days. Cucumis sativus. Plant produces good yields of 3 foot long slim light green cucumbers. Best when harvested when 12" long. This is the longest cucumber on the market. It is an excellent slicer

65 days. Cucumis sativus. Plant produces good yields of 3 foot long slim light green cucumbers. Best when harvested when 12" long. This is the longest cucumber on the market. It is an excellent slicer and perfect for salads and gourmet dishes. It has a crisp mild flavor and is easy to digest. Impress your neighbors and grow a 3 foot long cucumber in your home garden! United States Department of Agriculture, NSL 65913.

The Armenian cucumber, Cucumis melo var. flexuosus, is a type of long, slender fruit which tastes like a cucumber and looks somewhat like a cucumber inside. It is actually a variety of muskmelon (C. melo), a species closely related to the cucumber (C. sativus). It is also known as the yard-long cucumber, snake cucumber, snake melon, and uri in Japan. It should not be confused with the snake gourds (Trichosanthes spp.). The skin is very thin, light green, and bumpless. It has no bitterness and the fruit is almost always used without peeling. It is also sometimes called a "gutah".

The Armenian cucumber grows approximately 30 to 36 inches (76 to 91 cm) long. It grows equally well on the ground or on a trellis. Armenian cucumber plants prefer to grow in full sun for most of the day. The fruit is most flavorful when it is 12 to 15 inches (30 to 38 cm) long. Pickled Armenian cucumber is sold in Middle Eastern markets as "Pickled Wild Cucumber".

Fredric Hasselquist, in his travels in Asia Minor, Egypt, Cyprus and Palestine in the 18th century, came across the "Egyptian or hairy cucumber, Cucumis chate", which is today included in the Armenian variety. It is said by Hasselquist to be the “queen of cucumbers, refreshing, sweet, solid, and wholesome.” He also states “they still form a great part of the food of the lower-class people in Egypt serving them for meat, drink and physic.” George E. Post, in Hastings' Dictionary of the Bible, states, “It is longer and more slender than the common cucumber, being often more than a foot long, and sometimes less than an inch thick, and pointed at both ends.”