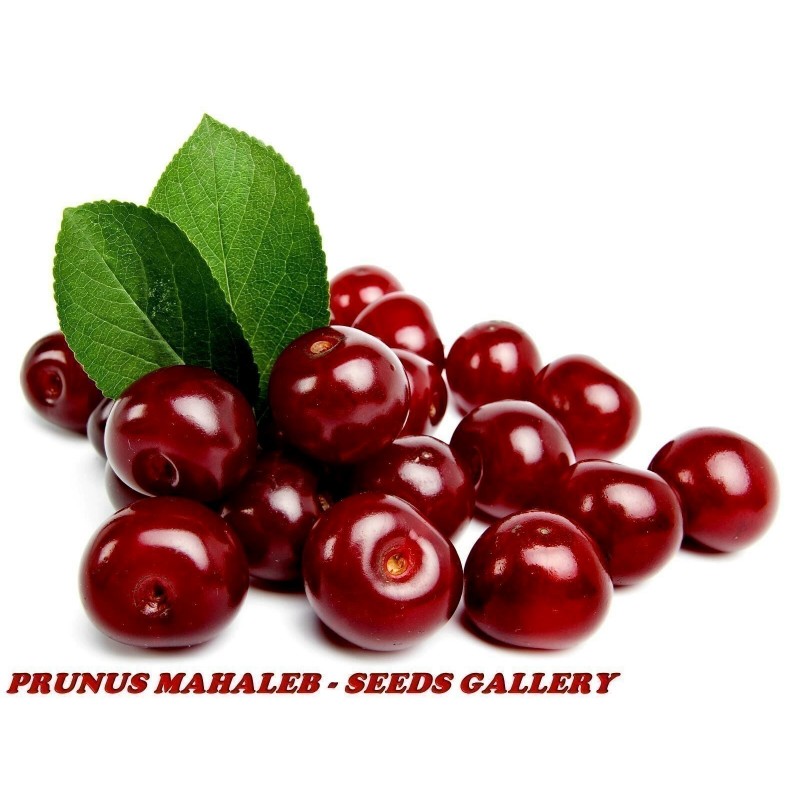 Prunus mahaleb, the mahaleb cherry or St Lucie cherry, is a species of cherry tree. The tree is cultivated for a spice obtained from the seeds inside the cherry stones. The seeds have a fragrant smell and have a taste comparable

Prunus mahaleb, the mahaleb cherry or St Lucie cherry, is a species of cherry tree. The tree is cultivated for a spice obtained from the seeds inside the cherry stones. The seeds have a fragrant smell and have a taste comparable to bitter almonds with cherry notes.

The tree is native in the Mediterranean region, Iran and parts of central Asia. It is adjudged to be native in northwestern Europe or at least it is naturalized there. It is a deciduous tree or large shrub, growing to 2–10 m (rarely up to 12 m) tall with a trunk up to 40 cm diameter.

The tree's bark is grey-brown, with conspicuous lenticels on young stems, and shallowly fissured on old trunks. The leaves are 1.5-5 cm long, 1-4 cm. wide, alternate, clustered at the end of alternately arranged twigs, ovate to cordate, pointed, have serrate edges, longitudinal venation and are glabrous and green. The petiole is 5-20 mm, and may or may not have two glands. The flowers are fragrant, pure white, small, 8-20 mm diameter, with an 8-15 mm pedicel; they are arranged 3-10 together on a 3-4 cm long raceme. The flower pollination is mainly by bees. The fruit is a small thin-fleshed cherry-like drupe 8–10 mm in diameter, green at first, turning red then dark purple to black when mature, with a very bitter flavour; flowering is in mid spring with the fruit ripening in mid to late summer.

Prunus mahaleb occurs in thickets and open woodland on dry slopes; in central Europe at altitudes up to 1,700 m, and in highlands at 1,200-2,000 m in southern Europe.[8] It has become naturalised in some temperate areas, including Europe north of its native range (north to Great Britain and Sweden), and locally in Australia and the United States.

It demonstrates selective fruit abortion, producing a high proportion of excess flowers that result in low fruit set levels. This reduces the number of "poor quality" fruit and increases the viability of its seeds.

A scientific study[13] discovered an ecological dependence between the plant and four species of frugivorous birds in southeastern Spain; blackbirds and blackcaps proved to be the most important seed dispersers. When Prunus mahaleb is fruiting, these birds consume the fruit almost exclusively, and disperse the seeds to the locations favourable for the tree's growth. The way in which some birds consume the fruits and the habitats those birds use may act as a selective force in determining which genetic variations of the cherry flourish.

The plant is cultivated for a spice obtained from the seeds inside the cherry stones. It is fragrant and has the taste of bitter almonds. It is used in small quantities to sharpen sweet foods, such as the Turkish sweet-bread çörek (chorak), the Greek sweet-bread tsoureki or the Armenian sweet-bread chorak. The chemical constituents are still uncertain, but the spice is prepared from the seeds, either by grinding and powdering the seed kernels, or in oil extracted from the seeds.

The wood is hard, and is used in cabinet-making and for pipes.

The bark, wood, and seeds contain coumarin. They have anti-inflammatory, sedative and vasodilation effects.

Away from its native range, the species is grown as an ornamental tree for its strongly fragrant flowers, throughout temperate regions of the world. A number of cultivars have been selected for their ornamental value, including 'Albomarginata', with variegated foliage, 'Bommii', a dwarf with strongly pendulous branches, 'Globosa', a compact dwarf clone, 'Pendula', with drooping branching, and 'Xanthocarpa' with yellow fruit.

Early history of mahaleb in human use

Prunus mahaleb is a likely candidate for the ḫalub-tree mentioned in early Sumerian writings, a durable fruit-bearing hardwood with seeds and leaves known for their medicinal properties and associated with the goddess Inana.[19] The Arabic محلب mahleb or mahlab meaning the mahaleb cherry is in medieval Arabic writings by among others Al-Razi (died 930), Ibn al-Baitar (died 1248) and Ibn al-Awwam.[20] Ibn Al-Awwam in his book on agriculture dated late 12th century described how to cultivate the mahaleb tree: he says the tree is a vigorous grower, easy to grow, but a thing to watch out for is that it is not resistant to prolonged drought. He also described how to prepare the mahaleb seeds by boiling them in sugared water.[21] The word, and probably the mahaleb itself, does not appear in classical Latin, nor early or mid medieval Latin, and is rare in late medieval Latin. One early record in Latin is year 1317 in an encyclopedia by Matthaeus Silvaticus who wrote that the "mahaleb" is the kernel seed of the fruit of both domesticated and wild cherry trees in Arabic countries.[22] Another early record in Latin is in a medical-botany book by Ioannis Mesuae in 1479 spelled almahaleb (where "al-" is the Arabic definite article).[23] In 1593 the Latin botanist Carolus Clusius spelled it mahaleb.[23] Today its cultivation and use is largely restricted to the region that in the 19th and earlier centuries formed the Ottoman Empire. Syria is the main exporting country.