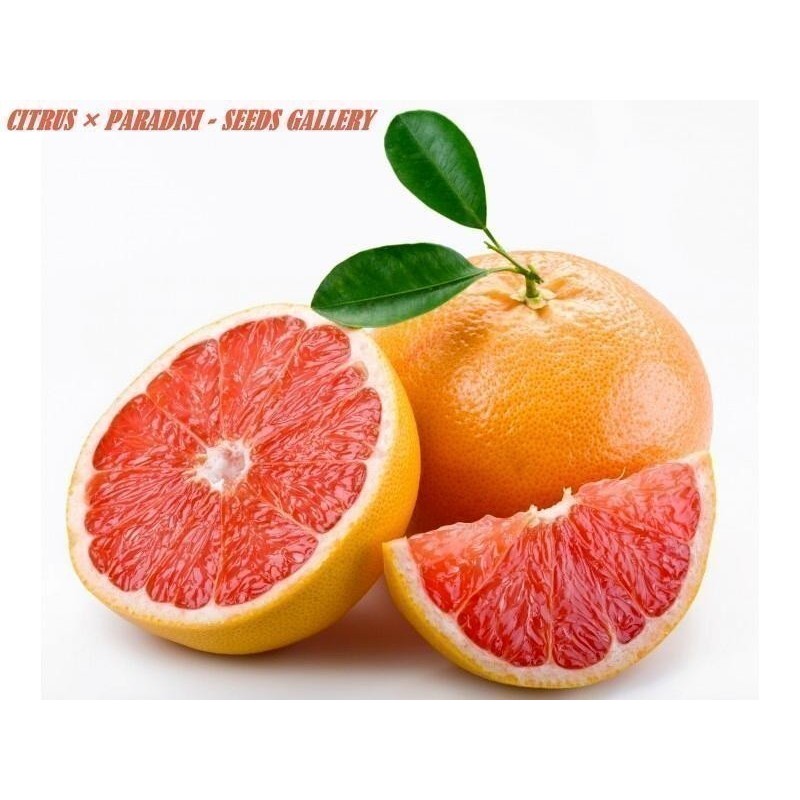 Grapefruit Red Seed (Citrus × paradisi)
Price for Package of 2 seeds.
The grapefruit (Citrus × paradisi) is a subtropical citrus tree known for its sour to semi-sweet fruit, an 18th-century hybrid first bred in Barbados. When found, it was named the "forbidden fruit"; and it has also been misidentified with the pomelo or shaddock (C. maxima), one of the parents of this hybrid, the

The grapefruit (Citrus × paradisi) is a subtropical citrus tree known for its sour to semi-sweet fruit, an 18th-century hybrid first bred in Barbados. When found, it was named the "forbidden fruit"; and it has also been misidentified with the pomelo or shaddock (C. maxima), one of the parents of this hybrid, the other being sweet orange (C. × sinensis).

The evergreen grapefruit trees usually grow to around 5–6 meters (16–20 ft) tall, although they can reach 13–15 m (43–49 ft). The leaves are glossy dark green, long (up to 15 centimeters (5.9 in)) and thin. It produces 5 cm (2 in) white four-petaled flowers. The fruit is yellow-orange skinned and generally an oblate spheroid in shape; it ranges in diameter from 10–15 cm (3.9–5.9 in). The flesh is segmented and acidic, varying in color depending on the cultivars, which include white, pink and red pulps of varying sweetness (generally, the redder varieties are sweeter). The 1929 US Ruby Red (of the Redblush variety) has the first grapefruit patent.

One ancestor of the grapefruit was the Jamaican sweet orange (Citrus sinensis), itself an ancient hybrid of Asian origin; the other was the Indonesian pomelo (C. maxima). One story of the fruit's origins is that a certain "Captain Shaddock"[5] brought pomelo seeds to Jamaica and bred the first fruit.[6] However, it probably originated as a naturally occurring hybrid.

The hybrid fruit, then called "the forbidden fruit", was first documented in 1750 by a Welshman, Rev. Griffith Hughes, who described specimens from Barbados in The Natural History of Barbados. Currently, the grapefruit is said to be one of the "Seven Wonders of Barbados."

The grapefruit was brought to Florida by Count Odet Philippe in 1823 in what is now known as Safety Harbor. Further crosses have produced the tangelo (1905), the Minneola tangelo (1931), and the oroblanco (1984).

The grapefruit was known as the shaddock or shattuck until the 19th century. Its current name alludes to clusters of the fruit on the tree, which often appear similar to grapes.[10] Botanically, it was not distinguished from the pomelo until the 1830s, when it was given the name Citrus paradisi. Its true origins were not determined until the 1940s. This led to the official name being altered to Citrus × paradisi, the "×" identifying its hybrid origin.

An early pioneer in the American citrus industry was Kimball Chase Atwood, a wealthy entrepreneur who founded the Atwood Grapefruit Co. in the late 19th century. The Atwood Grove became the largest grapefruit grove in the world, with a yearly output of 80,000 boxes of fruit.  It was there that pink grapefruit was first discovered in 1906.

Grapefruit comes in many varieties, determinable by color, which is caused by the pigmentation of the fruit in respect of its state of ripeness.[20] The most popular varieties cultivated today are red, white, and pink hues, referring to the internal pulp color of the fruit. The family of flavors range from highly acidic and somewhat sour to sweet and tart.[20] Grapefruit mercaptan, a sulfur-containing terpene, is one of the substances which has a strong influence on the taste and odor of grapefruit, compared with other citrus fruits.

Grapefruit can have a number of interactions with drugs, often increasing the effective potency of compounds. Researchers have identified 85 drugs with which grapefruit is known to have an adverse reaction. Grapefruit contains a number of polyphenolic compounds, including the flavanone naringin, alongside the two furanocoumarins, bergamottin and dihydroxybergamottin. These inhibit the drug-metabolizing enzyme isoform CYP3A4 predominantly in the small intestine, but at higher doses also inhibit hepatic CYP3A4. It is via inhibition of this enzyme that grapefruit increases the effects of a variety of drugs by increasing their bioavailability.

In particular grapefruit and bitter oranges are known to interact with statins.

When drugs are taken orally, they enter the gut lumen to be absorbed in the small intestine and sometimes, in the stomach. In order for drugs to be absorbed, they must pass through the epithelial cells that line the lumen wall before they can enter the hepatic portal circulation to be distributed systemically in blood circulation. Drugs are metabolized by drug-specific metabolizing enzymes in the epithelial cells. Metabolizing enzymes transform these drugs into metabolites. The primary purpose for drug metabolism is to detoxify, inactivate, solubilize and eliminate these drugs. As a result, the amount of the drug in its original form that reaches systemic circulation is reduced due to this first-pass metabolism.

Grapefruit is an excellent source of many nutrients and phytochemicals that contribute to a healthy diet. Grapefruit is a good source of vitamin C, contains the fiber pectin, and the pink and red hues contain the beneficial antioxidant lycopene. Studies have shown grapefruit helps lower cholesterol,  and there is evidence that the seeds have antioxidant properties.[43] Grapefruit forms a core part of the "grapefruit diet", the theory being that the fruit's low glycemic index is able to help the body's metabolism burn fat.

Grapefruit seed extract (GSE) has been shown to have strong antimicrobial properties against fungi.[45] It is also believed to have antimicrobial properties for bacteria, however there are no known studies that demonstrate its efficacy. Additionally, although GSE is promoted as a highly effective plant-based preservative by some natural personal care manufacturers, studies have shown that the apparent antimicrobial activity associated with GSE preparations is merely due to contamination with synthetic preservatives.

There is a popular myth that grapefruits contain high amounts of spermidine, a simple polyamine that may be related to aging. The myth probably relies on the confusion between spermidine and putrescine. While citrus fruits show high amounts of putrescine, they contain very little spermidine.

In Costa Rica, especially in Atenas, grapefruit are often cooked to remove their sourness, rendering them as sweets; they are also stuffed with dulce de leche, resulting in a dessert called toronja rellena (stuffed grapefruit). In Haiti, grapefruit is used primarily for its juice (jus de Chadèque), but is also used to make jam (confiture de Chadèque).