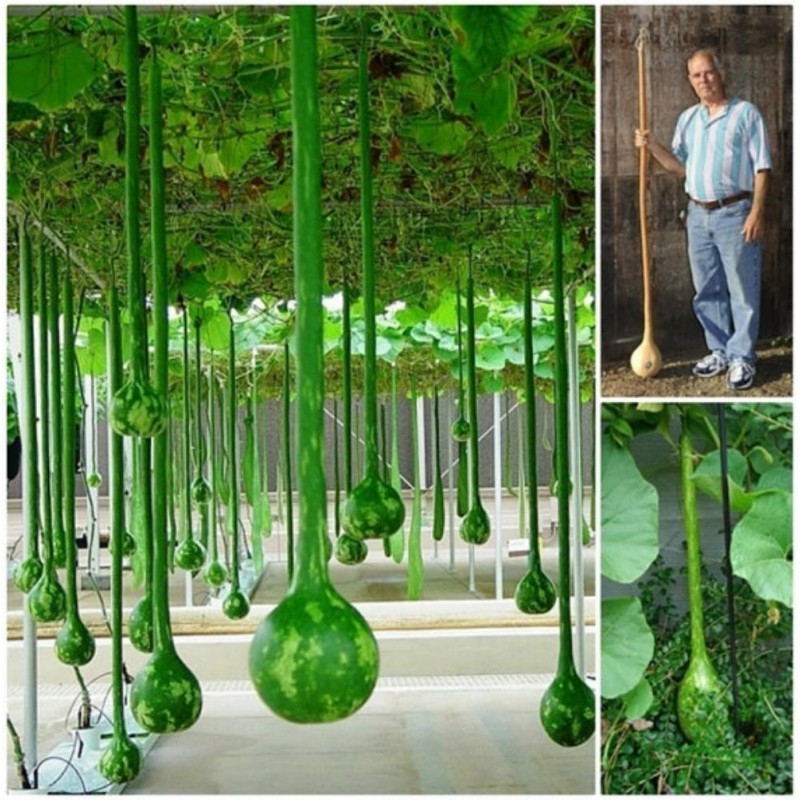 Price for Package of 3 Fresh seeds.

This annual vine can easily be grown from seed. Seed may be planted outdoors when soil temperatures have reached 70 degrees F. , which typically occurs shortly after the last spring frost date. Plant several seeds together in mounds to 3' apart if growing on supports,

Price for Package of 3 Fresh seeds.

This annual vine can easily be grown from seed. Seed may be planted outdoors when soil temperatures have reached 70 degrees F. , which typically occurs shortly after the last spring frost date. Plant several seeds together in mounds to 3' apart if growing on supports, but to 4-6' apart if growing along the ground. Thin later. This vine needs a long growing season for production of quality mature fruit, so seed may be started indoors in peat pots several weeks prior to last spring frost date. Plants generally prefer light, sandy or loamy, well-drained soils in full sun with some light afternoon shade. Best performance occurs with consistent moisture. Flowers bloom at night, and hand pollination often improves fruit set. Plants have good tolerance for hot and humid summers. Let stems scramble along the ground if space is available. Otherwise grow on support structures. If gourds are to be harvested for ornamental purposes, vines should be grown on support structures that are strong enough to keep fruit from touching the ground. Cut some stem section with each mature fruit when harvesting in fall.

Lagenaria siceraria, a hardshell gourd, is probably native to Africa, but has been domesticated since ancient times in a number of semi-tropical to tropical areas around the globe. Mature fruits appear in variety of different shapes, including rounded, dumbbell-shaped, bottle-shaped or crookneck-shaped. Vines that produce rounded fruits are often called calabash gourd and vines that produce more cylindrical fruits are often called bottle gourd. Vines may be grown trailing along the ground, along fences or on strong trellises or other upright supports. Each vine will typically grow to 10-16' long clad with large, hairy, broad-ovate, entire to shallowly-lobed, dark green leaves (to 12" by 12") with two-branched tendrils and night-blooming, trumpet-shaped, white summer flowers (pale yellow bases). Fruit (a pepo to 3' long) has a smooth, light green skin when young, but matures to yellow or light brown. Many gourds are edible (like zucchini) when young, but some varieties are bitter and inedible. Inner white pulp dries when fruits mature, leaving a hard shell with very little else inside except the seeds. The hard shells of mature fruits are waterproof, and they can be dried and used for a variety of different non-food purposes including containers (water jugs, planters, cups, bowls), floats (fish nets), smoking pipes, musical instruments or ornamental decoration (native artifacts).

Young shoots and leaves can be cooked. Seeds make an interesting addition to soups. Hard shells of mature fruits have a number of non-food uses.