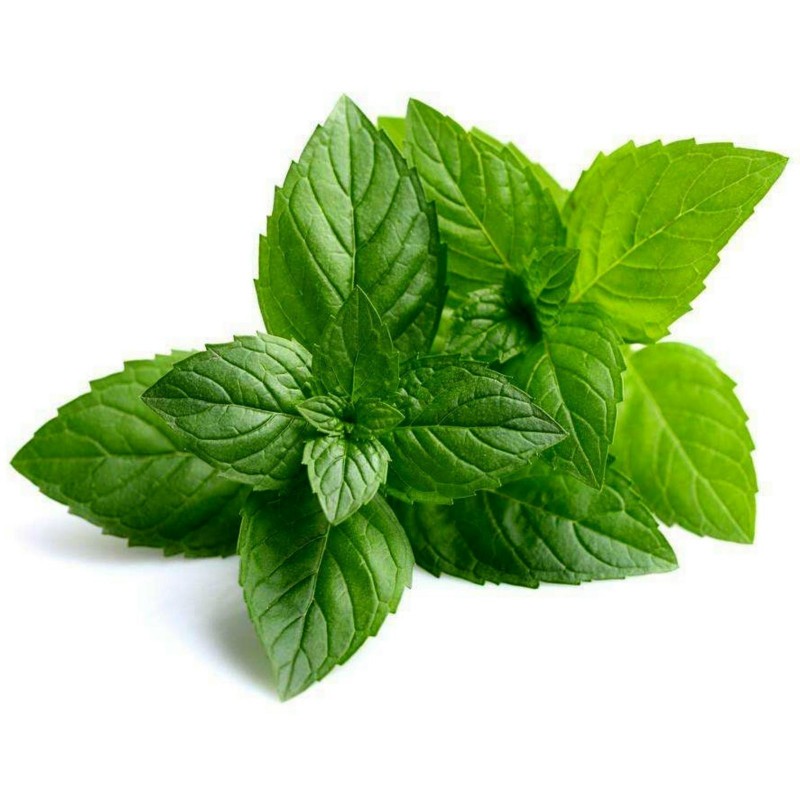 Price for Package of 800 seeds.

Peppermint (Mentha × piperita, also known as M. balsamea Willd.) is a hybrid mint, a cross between watermint and spearmint. The plant, indigenous to Europe and the Middle East, is now widespread

Price for Package of 800 seeds.

Peppermint (Mentha × piperita, also known as M. balsamea Willd.) is a hybrid mint, a cross between watermint and spearmint. The plant, indigenous to Europe and the Middle East, is now widespread in cultivation in many regions of the world. It is found wild occasionally with its parent species.

Culinary and other uses

Pliny the elder, 79 AD, an ancient Roman author, natural philosopher and naval and military commander wrote Naturalis Historia, it tells us that the Greeks and Romans crowned themselves with peppermint at their feasts and adorned their tables with its sprays, and that their cooks flavoured both their sauces and their wines with its essence.

It is the oldest and most popular flavour of mint-flavoured confectionery and is often used in tea and for flavouring ice cream, confectionery, chewing gum, and toothpaste. Peppermint can also be found in some shampoos, soaps and skin care products.

Menthol activates cold-sensitive TRPM8 receptors in the skin and mucosal tissues, and is the primary source of the cooling sensation that follows the topical application of peppermint oil.

Peppermint flowers are large nectar producers and honey bees as well as other nectar harvesting organisms forage them heavily. A mild, pleasant varietal honey can be produced if there is a sufficient area of plants.

The chemical composition of the essential oil from peppermint (Mentha x piperita L.) was analyzed by GC/FID and GC-MS. The main constituents were menthol (40.7%) and menthone (23.4%). Further components were (+/-)-menthyl acetate, 1,8-cineole, limonene, beta-pinene and beta-caryophyllene.

Peppermint oil has also been shown to be effective for IBS with constipation.

Peppermint has a long tradition of use in folk medicine and aromatherapy. Peppermint is commonly thought to soothe or treat symptoms such as nausea, vomiting, abdominal pain, indigestion, irritable bowel, and bloating, although most of these effects have not been adequately demonstrated in human research.

The aroma of peppermint has been studied for its possible effect to enhance memory and alertness, although other research contests this.

When peppermint oil antacid products dissolve too quickly, they can sometimes cause heartburn and nausea.

Due to the menthol constituent, topical use of peppermint oil around the facial or chest areas of infants and young children, especially around the nose, can induce apnea, laryngeal and bronchial spasm, acute respiratory distress with cyanosis, or respiratory arrest.

Peppermint oil is also used in construction and plumbing to test for the tightness of pipes and disclose leaks by its odor.

Peppermint was first described in 1753 by Carl Linnaeus from specimens that had been collected in England; he treated it as a species, but it is now universally agreed to be a hybrid.

It is a herbaceous rhizomatous perennial plant growing to 30–90 cm (12–35 in) tall, with smooth stems, square in cross section. The rhizomes are wide-spreading, fleshy, and bare fibrous roots. The leaves are from 4–9 cm (1.6–3.5 in) long and 1.5–4 cm (0.59–1.57 in) broad, dark green with reddish veins, and with an acute apex and coarsely toothed margins. The leaves and stems are usually slightly fuzzy. The flowers are purple, 6–8 mm (0.24–0.31 in) long, with a four-lobed corolla about 5 mm (0.20 in) diameter; they are produced in whorls (verticillasters) around the stem, forming thick, blunt spikes. Flowering is from mid to late summer. The chromosome number is variable, with 2n counts of 66, 72, 84, and 120 recorded. Peppermint is a fast-growing plant; once it sprouts, it spreads very quickly.

Peppermint typically occurs in moist habitats, including stream sides and drainage ditches. Being a hybrid, it is usually sterile, producing no seeds and reproducing only vegetatively, spreading by its rhizomes. If placed, it can grow anywhere, with a few exceptions.

Outside of its native range, areas where peppermint was formerly grown for oil often have an abundance of feral plants, and it is considered invasive in Australia, the Galápagos Islands, New Zealand, and in the United States in the Great Lakes region, noted since 1843.

Peppermint generally grows best in moist, shaded locations, and expands by underground rhizomes. Young shoots are taken from old stocks and dibbled into the ground about 1.5 feet apart. They grow quickly and cover the ground with runners if it is permanently moist. For the home gardener, it is often grown in containers to restrict rapid spreading. It grows best with a good supply of water, without being water-logged, and planted in areas with part-sun to shade.

The leaves and flowering tops are used; they are collected as soon as the flowers begin to open and can be dried. The wild form of the plant is less suitable for this purpose, with cultivated plants having been selected for more and better oil content. They may be allowed to lie and wilt a little before distillation, or they may be taken directly to the still.

1Fill a seed tray with potting soil. Gently tap the seed tray on a hard surface to flatten and evenly distribute the soil.

2Moisten the potting soil lightly with a watering can.

3Sow the mint seeds 1/4 inch deep in the moist potting soil. Place one or two peppermint seeds in each section of the seed tray.

4Water the peppermint seeds lightly. The potting soil should be damp, but not too soggy.

5Cover the seed tray with plastic wrap or plastic film designed for seed trays, which is available at most gardening supply stores.

6Place the seed tray in a sunny and warm place indoors. Peppermint germinates in soil that maintains a temperature of at least 65 degrees Fahrenheit. Sprouts usually begin to emerge between seven and 14 days after planting.

7Water the seeds every few days to keep the soil damp.

8Peel back the plastic wrap once seedlings begin to emerge from the soil. Keep the seed tray in a sunny and warm spot until early spring. Transplant the seedlings outdoors.