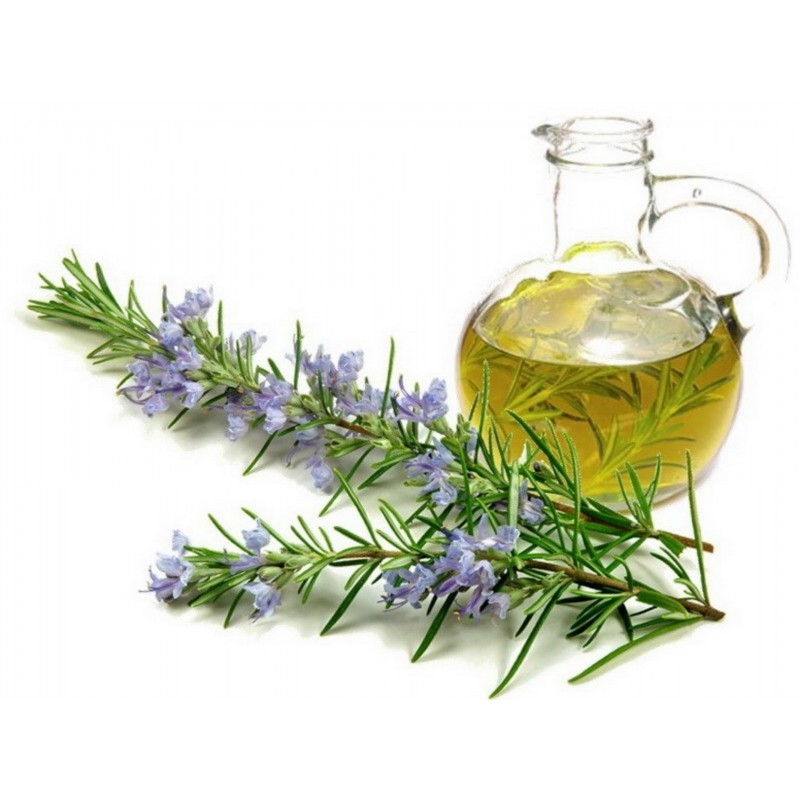 Rosmarinus officinalis, commonly known as rosemary, is a woody, perennial herb with fragrant, evergreen, needle-like leaves and white, pink, purple, or blue flowers, native to the Mediterranean region. It is a member of the mint family Lamiaceae, which includes many other herbs. The name "rosemary" derives from the Latin for "dew" (ros) and "sea" (marinus), or "dew of the sea", because in many locations, it needs no water other than the humidity carried by the sea breeze to live. The plant is also sometimes called anthos, from the ancient Greek word ἄνθος, meaning "flower".
Rosemary is used as a decorative plant in gardens and has many culinary and medical uses. The plant is said to improve the memory. The leaves are used to flavor various foods, such as stuffings and roast meats.
Taxonomy
Rosmarinus officinalis is one of 2-4 species in the genus Rosmarinus'.[4] The other species most often recognized is the closely related, Rosmarinus eriocalyx, of the Maghreb of Africa and Iberia. The genus was named by the 18th-century naturalist and founding taxonomist Carolus Linnaeus.
Description

Rosemary is an aromatic evergreen shrub that has leaves similar to hemlock needles. The leaves are used as a flavoring in foods such as stuffings and roast lamb, pork, chicken and turkey. It is native to the Mediterranean and Asia, but is reasonably hardy in cool climates. It can withstand droughts, surviving a severe lack of water for lengthy periods.[5] Forms range from upright to trailing; the upright forms can reach 1.5 m (5 ft) tall, rarely 2 m (6 ft 7 in). The leaves are evergreen, 2–4 cm (0.8–1.6 in) long and 2–5 mm broad, green above, and white below, with dense, short, woolly hair. The plant flowers in spring and summer in temperate climates, but the plants can be in constant bloom in warm climates; flowers are white, pink, purple or deep blue.

Mythology
According to legend, it was draped around the Greek goddess Aphrodite when she rose from the sea, born of Ouranos's semen. The Virgin Mary is said to have spread her blue cloak over a white-blossomed rosemary bush when she was resting, and the flowers turned blue. The shrub then became known as the 'Rose of Mary'.
Usage
Cultivation
Since it is attractive and drought tolerant, rosemary is used as an ornamental plant in gardens and for xeriscape landscaping, especially in regions of Mediterranean climate. It is considered easy to grow and pest-resistant. Rosemary can grow quite large and retain attractiveness for many years, can be pruned into formal shapes and low hedges, and has been used for topiary. It is easily grown in pots. The groundcover cultivars spread widely, with a dense and durable texture.
Rosemary grows on friable loam soil with good drainage in an open, sunny position. It will not withstand waterlogging and some varieties are susceptible to frost. It grows best in neutral to alkaline conditions (pH 7–7.8) with average fertility. It can be propagated from an existing plant by clipping a shoot (from a soft new growth) 10–15 cm (4–6 in) long, stripping a few leaves from the bottom, and planting it directly into soil.
Culinary use
The leaves, both fresh and dried, are used in traditional Mediterranean cuisine. They have a bitter, astringent taste and are highly aromatic, which complements a wide variety of foods. A tisane can be made from the leaves. When burnt, they give off a mustard-like smell and a smell similar to burning wood, which can be used to flavor foods while barbecuing. Rosemary is high in iron, calcium and vitamin B6, 317 mg, 6.65 mg and 0.336 mg per 100 g, respectively. Rosemary extract has been shown to improve the shelf life and heat stability of omega 3-rich oils, which are prone to rancidity.
Fragrance
Rosemary oil is used for purposes of fragrant bodily perfumes or to emit an aroma into a room. It is also burnt as incense, and used in shampoos and cleaning products.
Traditional medicine
Hungary water was first prepared for the Queen of Hungary Elisabeth of Poland to " ... renovate vitality of paralyzed limbs ... " and to treat gout. It was used externally and prepared by mixing fresh rosemary tops into spirits of wine. Don Quixote (Part One, Chapter XVII) mixes it in his recipe of the miraculous balm of Fierabras.
Rosemary has a very old reputation for improving memory and has been used as a symbol for remembrance during weddings, war commemorations and funerals in Europe and Australia. Mourners would throw it into graves as a symbol of remembrance for the dead. In Shakespeare's Hamlet, Ophelia says, "There's rosemary, that's for remembrance." (Hamlet, iv. 5.) A modern study lends some credence to this reputation. When the smell of rosemary was pumped into cubicles where people were working, they showed improved memory, though with slower recall.
Rosemary contains a number of potentially biologically active compounds, including antioxidants carnosic acid and rosmarinic acid. Other chemical compounds include camphor, caffeic acid, ursolic acid, betulinic acid, rosmaridiphenol and rosmanol. Rosemary antioxidants levels are closely related to soil moisture content.
Folklore and customs
In the Middle Ages, rosemary was associated with wedding ceremonies. The bride would wear a rosemary headpiece and the groom and wedding guests would all wear a sprig of rosemary, and from this association with weddings, rosemary evolved into a love charm. Newlywed couples would plant a branch of rosemary on their wedding day. If the branch grew, it was a good omen for the union and family. In ‘A Modern Herbal’, Mrs Grieves says, “A rosemary branch, richly gilded and tied with silken ribands of all colours, was also presented to wedding guests, as a symbol of love and loyalty.” If a young person would tap another with a rosemary sprig and if the sprig contained an open flower, it was said that the couple would fall in love.
Rosemary was used as a divinatory herb. Several herbs were grown in pots and assigned the name of a potential lover. They were left to grow and the plant that grew the strongest and fastest gave the answer. Rosemary was stuffed into poppets (cloth dolls) to attract a lover or attract curative vibrations for illness. It was believed that placing a sprig of rosemary under a pillow before sleep would repel nightmares, and if placed outside the home it would repel witches. Somehow, the use of rosemary in the garden to repel witches turned into signification that the woman ruled the household in homes and gardens where rosemary grew abundantly. By the 16th century, men were known to rip up rosemary bushes to show that they, not their wives, ruled the roost.
In Australia, sprigs of rosemary are worn on ANZAC Day and sometimes Remembrance Day to signify remembrance; the herb grows wild on the Gallipoli Peninsula.
MHS 25 (10 S)
295 Przedmioty