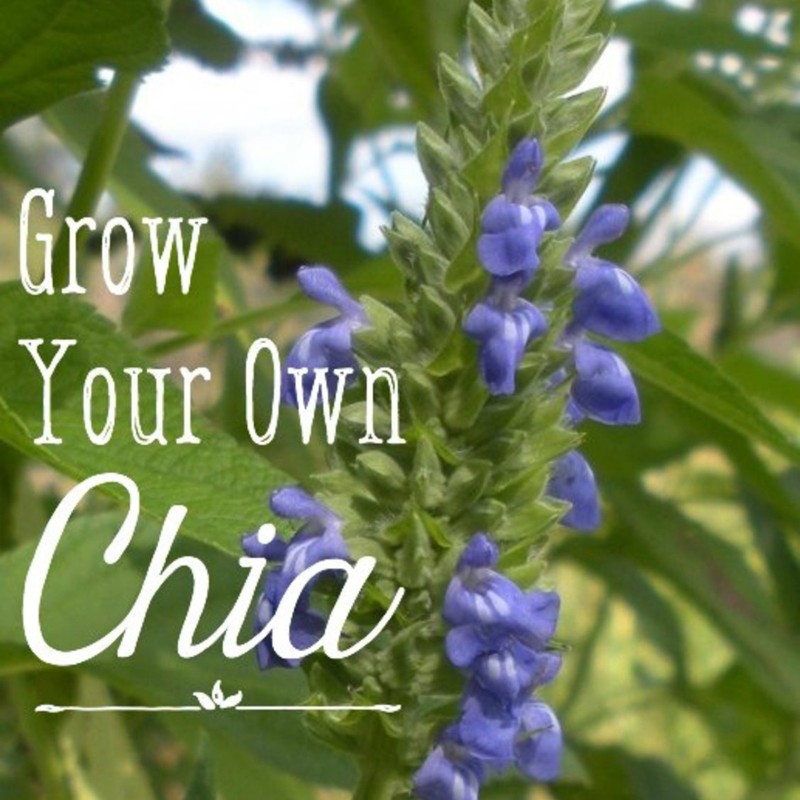 Chia (/ˈtʃiːə/), is a species of flowering plant in the mint family, Lamiaceae, native to central and southern Mexico and Guatemala.

Chia (/ˈtʃiːə/), is a species of flowering plant in the mint family, Lamiaceae, native to central and southern Mexico and Guatemala. The sixteenth-century Codex Mendoza provides evidence that it was cultivated by the Aztec in pre-Columbian times; economic historians have suggested it was as important as maize as a food crop. Ground or whole chia seeds still are used in Paraguay, Bolivia, Argentina, Mexico, and Guatemala for nutritious drinks and as a food source.

The word "chia" is derived from the Nahuatl word chian, meaning oily.

S. hispanica is one of two plants known as chia, the other being Salvia columbariae, commonly known as golden chia.

Typically, chia seeds are small ovals with a diameter of approximately 1 mm (0.039 in). They are mottle-colored with brown, gray, black, and white. The seeds are hydrophilic, absorbing up to 12 times their weight in liquid when soaked. While soaking, the seeds develop a mucilaginous coating that gives chia-based beverages a distinctive gel texture.

Chia seed is traditionally consumed in Mexico and the southwestern United States, but is not widely known in Europe. Chia (or chian or chien) has mostly been identified as Salvia hispanica L. Today, chia is grown commercially in its native Mexico, as well as in Bolivia, Argentina, Ecuador, Nicaragua, Guatemala, and Australia.[9] New patented varieties of chia have been developed in Kentucky for cultivation in northern latitudes of the United States.

In 2009, the European Union approved chia seeds as a novel food, allowing chia to be 5% of a bread product's total matter.

Chia seeds may be added to other foods as a topping or put into smoothies, breakfast cereals, energy bars, granola bars, yogurt, tortillas, and bread. They also may be made into a gelatin-like substance or consumed raw. The gel may be used to replace as much as 25% of the egg content and oil in cakes while providing other nutrients.

No evidence to date indicates consuming chia seeds has adverse effects on or interactions with prescription drugs.

The growing cycle length for chia varies over cultivation locations and is influenced by elevation. For production sites located in different ecosystems in Bolivia, Argentina, and Ecuador, growing cycles are between 100–150 days in duration. Accordingly, commercial production fields are located in the range of 8–2200 m altitude across a variety of ecosystems ranging from tropical coastal desert, to tropical rain forest, and inter-Andean dry valley. In northwestern Argentina, a time span from planting to harvest of 120–180 days is reported for fields located at elevations of 900–1500 m.

S. hispanica is a short-day flowering plant, indicating its photoperiodic sensitivity and lack of photoperiodic variability in traditional cultivars, has limited commercial use of chia seeds to tropical and subtropical latitudes until 2012. Now, traditional domesticated lines of S. hispanica can be grown in temperate zones at higher latitudes in the United States. In Arizona or Kentucky, seed maturation of traditional chia cultivars is stopped by frost before or after flower set, preventing seed harvesting. Advances in plant breeding during 2012, however, led to development of new early-flowering chia genotypes proving to have higher yields in Kentucky.

Seed yield varies depending on cultivars, mode of cultivation, and growing conditions by geographic region. For example, commercial fields in Argentina and Colombia vary in yield range from 450 to 1250 kg/ha. A small-scale study with three cultivars grown in the inter-Andean valleys of Ecuador produced yields up to 2300 kg/ha, indicating that favorable growing environment and cultivar interacted to produce such high yields. Genotype has a larger effect on yield than on protein content, oil content, fatty acid composition, or phenolic compounds, whereas high temperature reduces oil content and degree of unsaturation, and raises protein content.

The cultivation of S. hispanica requires light to medium clay or sandy soils. The plant prefers well-drained, moderately fertile soils, but can cope with acid soils and moderate drought. Sown chia seeds need moisture for seedling establishment, while the maturing chia plant does not tolerate wet soils during growth.