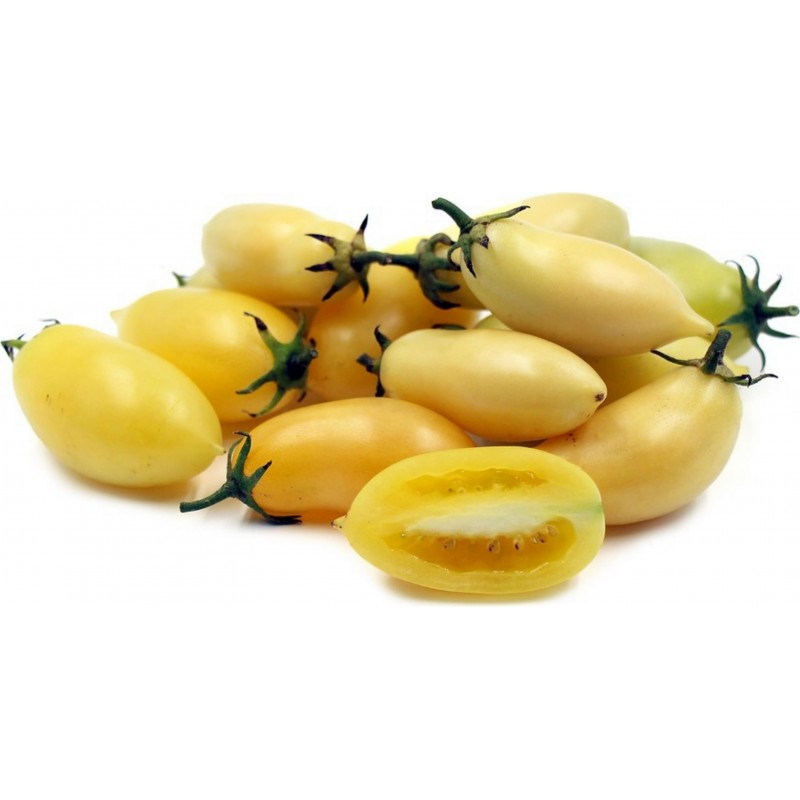 Cream Sausage tomatoes are long and cylindrical, typically harvested at around three inches, with the ivory-yellow outer skin. Their meaty inner flesh is very juicy, offering a sweet tomato flavor that is slightly

Cream Sausage tomatoes are long and cylindrical, typically harvested at around three inches, with the ivory-yellow outer skin. Their meaty inner flesh is very juicy, offering a sweet tomato flavor that is slightly acidic and tangy. The Cream Sausage tomato plant is a determinate, or bush, variety, meaning that it sets fruit all at once, and it is known to be an extremely productive cultivar. No staking or caging is needed for this easy-to-grow, bushy little 100 cm plant that bears fruit in clusters of about six.

Current Facts
The Cream Sausage tomato is an heirloom variety Roma, or paste, tomato. Tomatoes, originally termed Solanum lycopersicum, are botanically referred to as Lycopersicon esculentum, although modern studies are encouraging a return to the original classification. Like the potato and eggplant, the tomato is a member of the nightshade family.

The Cream Sausage tomato is easy to slice because of its shape and is perfect for eating fresh in salads. This variety also makes an excellent sweet pasta sauce, salsa, or yellow ketchup. Tomatoes pair well with savory herbs and soft cheeses. Try eating them with basil, cilantro, chives, dill, garlic, mint, curry, paprika, pepper, rosemary, oregano, parsley, thyme, red pepper flakes, fennel, and tarragon. Store tomatoes at room temperature until ripe, after which refrigeration can slow the process of decay.

The Cream Sausage tomato is an American heirloom bred by Tom Wagner, a resident of Everett, Washington who is one of a very few independent plant breeders in the United States and somewhat of a legend in the tomato world. Tom Wagner grew up on a Kansas wheat farm and began to experiment with breeding at an early age. His business is breeding heritage type varieties of tomatoes and potatoes, and most of his tomatoes are known for having unique colors and flavors or crack heat and insect tolerance.

History
The Cream Sausage tomato was bred by Thomas Wager of Washington in the United States and was originally named the Banana Cream tomato before xxxxxxxxxx Heirloom Seeds introduced it in 2004 as Cream Sausage. This variety will grow well in most regions of the United State, but because it is a determinate variety that sets its crop all at once, it is recommended to stagger the sowing of these seeds so that you get continual harvests. Plant tomatoes outdoors only when the danger of frost is past and night temperatures consistently remain above 55 degrees as tomatoes are not hardy and cannot stand any frost.