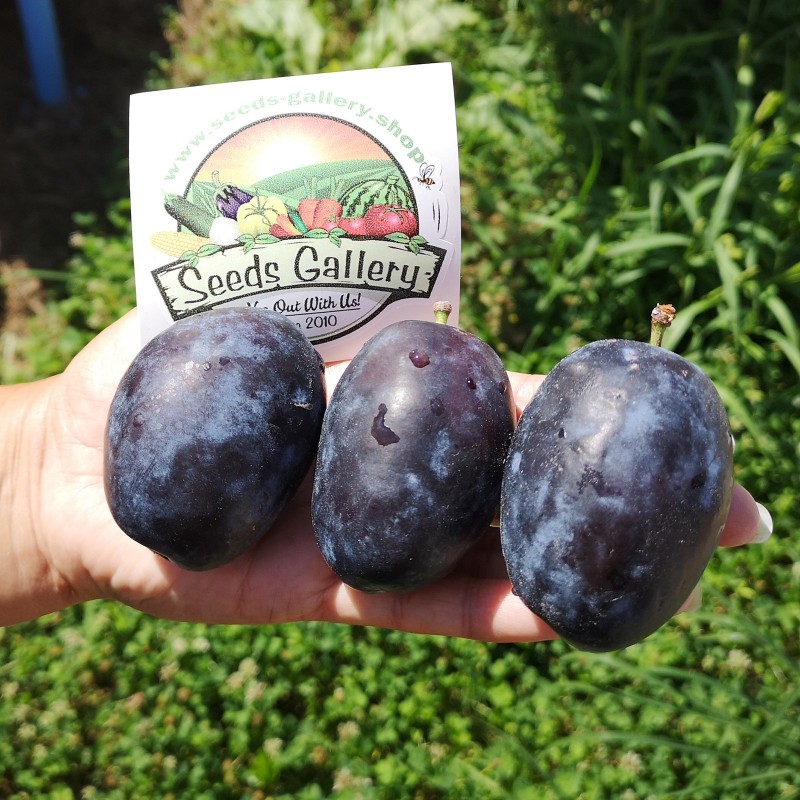 This variety is from Bosnia, and very resistant to diseases. We came across this plum by chance at a farmer's yard and were immediately amazed by both the size and taste of this variety.

This variety is from Bosnia, and very resistant to diseases. We came across this plum by chance at a farmer's yard and were immediately amazed by both the size and taste of this variety.

Unfortunately, the owner did not know what the name of the variety was, he only knew how to tell us that this plum variety was planted by his great-grandfather and that since then this plum has been kept and planted regularly so that this variety spreads and preserves as much as possible.

We asked him how this plum tolerates winter and low temperatures, and he answered that the temperature in their village drops to minus 24 degrees Celsius, and this was no problem for this plum.

The fruits are really huge and weigh an average of 70 to 85 grams per fruit.

A plum is a fruit of the subgenus Prunus of the genus Prunus. The subgenus is distinguished from other subgenera (peaches, cherries, bird cherries, etc.) in the shoots having terminal bud and solitary side buds (not clustered), the flowers in groups of one to five together on short stems, and the fruit having a groove running down one side and a smooth stone (or pit).

Mature plum fruit may have a dusty-white waxy coating that gives them a glaucous appearance. This is an epicuticular wax coating and is known as "wax bloom". Dried plum fruits are called dried plums or prunes, although, in American English, prunes are a distinct type of plum, and may have pre-dated the fruits now commonly known as plums.

Typically it forms a large shrub or a small tree. It may be somewhat thorny, with white blossom, borne in early spring. The oval or spherical fruit varies in size, but can be up to 8 cm across, and is usually sweet (dessert plum), though some varieties are sour and require cooking with sugar to make them palatable. Like all Prunus fruits, it contains a single large seed, usually called a stone, which is discarded when eating.

Plums are grown commercially in orchards, but modern rootstocks, together with self-fertile strains, training and pruning methods, allow single plums to be grown in relatively small spaces. Their early flowering and fruiting means that they require a sheltered spot away from frosts and cold winds.

The taste of the plum fruit ranges from sweet to tart; the skin itself may be particularly tart. It is juicy and can be eaten fresh or used in jam-making or other recipes. Plum juice can be fermented into plum wine. In central England, a cider-like alcoholic beverage known as plum jerkum is made from plums.

Dried plums (or prunes) are also sweet and juicy and contain several antioxidants. Plums and prunes are known for their laxative effect. This effect has been attributed to various compounds present in the fruits, such as dietary fiber, sorbitol,[7] and isatin.[8] Prunes and prune juice are often used to help regulate the functioning of the digestive system. Dried prune marketers in the US have, in recent years, begun marketing their product as "dried plums". This is due to "prune" having negative connotations connected with elderly people suffering from constipation.

Dried, salted plums are used as a snack, sometimes known as saladito or salao. Various flavors of dried plum are available at Chinese grocers and specialty stores worldwide. They tend to be much drier than the standard prune. Cream, ginseng, spicy, and salty are among the common varieties. Licorice is generally used to intensify the flavor of these plums and is used to make salty plum drinks and toppings for shaved ice or baobing.

Pickled plums are another type of preserve available in Asia and international specialty stores. The Japanese variety, called umeboshi, is often used for rice balls, called onigiri or omusubi. The ume, from which umeboshi are made, is more closely related, however, to the apricot than to the plum.

As with many other members of the rose family, plum seeds contain cyanogenic glycosides, including amygdalin.[10] These substances are capable of decomposing into a sugar molecule and hydrogen cyanide gas. While plum seeds are not the most toxic within the rose family (the bitter almond is the most toxic[citation needed]), large doses of these chemicals from any source are hazardous to human health. On the other hand, plums are considered a source of phytochemical compounds with beneficial effects on health.

Prune kernel oil is made from the fleshy inner part of the pit of the plum.

Plums come in a wide variety of colours and sizes. Some are much firmer-fleshed than others, and some have yellow, white, green or red flesh, with equally varying skin colour.

Though not available commercially, the wood of plum trees is used by hobbyists and other private woodworkers for musical instruments, knife handles, inlays, and similar small projects.

When it flowers in the early spring, a plum tree will be covered in blossoms, and in a good year approximately 50% of the flowers will be pollinated and become plums. Flowering starts after 80 growing degree days.

If the weather is too dry, the plums will not develop past a certain stage, but will fall from the tree while still tiny, green buds, and if it is unseasonably wet or if the plums are not harvested as soon as they are ripe, the fruit may develop a fungal condition called brown rot. Brown rot is not toxic, and very small affected areas can be cut out of the fruit, but unless the rot is caught immediately, the fruit will no longer be edible. Plum is used as a food plant by the larvae of some Lepidoptera, including November moth, willow beauty and short-cloaked moth.

The Serbian plum (Serbian: шљива / šljiva) is the third most produced in the world. In the Balkans, plum is converted into an alcoholic drink named slivovitz (plum brandy) (Serbian: шљивовица / šljivovica).

A large number of plums, of the Damson variety, are also grown in Hungary, where they are called szilva and are used to make lekvar (a plum paste jam), palinka (traditional fruit brandy), plum dumplings, and other foods. The region of Szabolcs-Szatmár, in the northeastern part of the country near the borders with Ukraine and Romania, is a major producer of plums.

The plum blossom or meihua (Chinese: 梅花; pinyin: méihuā), along with the peony, are considered traditional floral emblems of China.

The plum is commonly used in China, Yunnan area, to produce a local plum wine with a smooth, sweet, fruity taste and approximately 12% alcohol by volume.