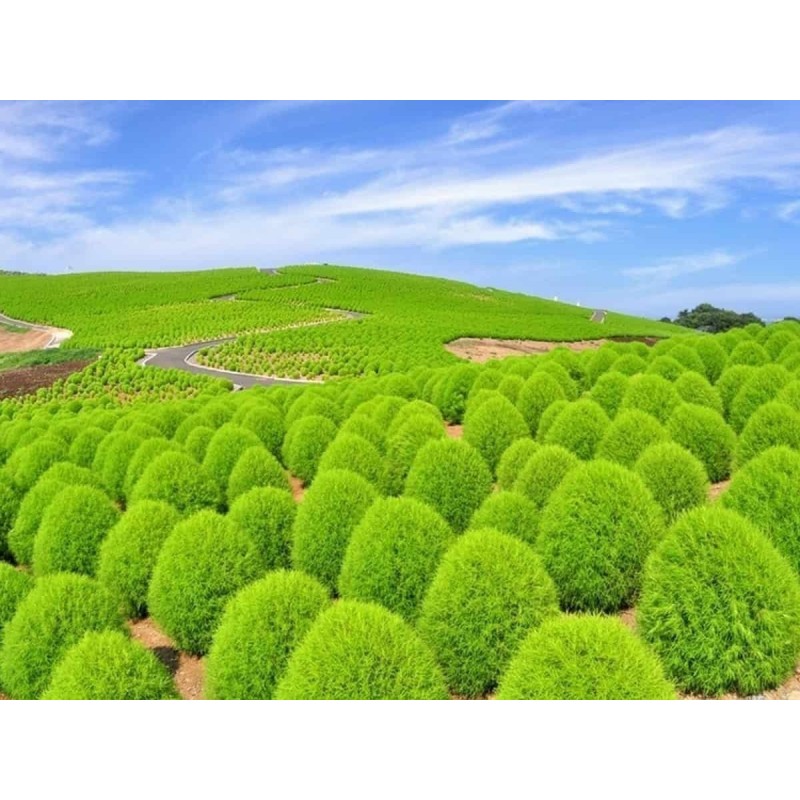 Bassia scoparia (synonym Kochia scoparia) is an annual shrub native to Eurasia. It has introduced populations in many parts of North America, where it is found in grassland, prairie, and desert shrub

Bassia scoparia (synonym Kochia scoparia) is an annual shrub native to Eurasia. It has introduced populations in many parts of North America, where it is found in grassland, prairie, and desert shrub ecosystems. Its vernacular names include burningbush, ragweed, summer cypress, fireball, belvedere and Mexican firebrush, Mexican fireweed. It may be planted in almost any climate zone in early spring.
Mexican Firebrush (B. S. trichophylla) is a cultivar of B. scoparia that turns bright red in the fall. They easily self-seed and can become a weed if not controlled.
Biology
The seed of Bassia scoparia is dispersed by wind, water, and especially by the whole plant detaching and tumbling in the wind (see Tumbleweed). The seed does not persist in the soil seed bank, but either germinates or dies within about a year.
Bassia scoparia is a C4 plant, specifically of the NADP-ME type.
Uses
Uses of Bassia scoparia include human food and traditional medicine, forage for livestock, and erosion control.
Tonburi
The seeds of Bassia scoparia are eaten as a food garnish called tonburi (とんぶり?) (Japanese). Its texture is similar to caviar, and it also is called "land caviar", "field caviar" and "mountain caviar". In Japan, tonburi is a delicacy (chinmi) of Akita prefecture. After harvesting the seeds are dried. To prepare them, the seeds are boiled and soaked in cold water for about a day, then rubbed by hand to remove the outer skin. The seeds are 1–2 mm in diameter, glossy with a black-green color.
Tonburi also is used in traditional Chinese medicine. It may prevent metabolic disorders such as hyperlipidemia, hypertension, obesity and atherosclerosis. In a study of mice fed a high-fat diet, an extract of tonburi did limit obesity. Bassia scoparia seeds contain momordin Ic, a triterpene saponin.
Forage
The plant is a moderately useful forage for livestock, and a potential forage crop for dry lands.However, its use is limited by toxicity when fed in large quantities. Livestock grazing principally on lush stands of Bassia scoparia sometimes experience weight loss, hyperbilirubinemia, photosensitization, and polyuria. When used as the only feed for weeks, Bassia scoparia hay may cause toxicity in cattle.
Other
Bassia scoparia is planted for ornament or erosion control. It is a known hyperaccumulator of Chromium, Lead, Mercury, Selenium, Silver, Zinc, and Uranium , and as such can be used for phytoremediation.
Systematics
The species was first published in 1753 by Carl Linnaeus, who named it Chenopodium scoparium. In 1809, it was included into the genus Kochia by Heinrich Schrader, and in 1978, into genus Bassia by A.J.Scott. Recent phylogenetic research confirmed, that Kochia has to be included in Bassia. Quelle: Wikipedia
UT 5
2 Items
Content not available