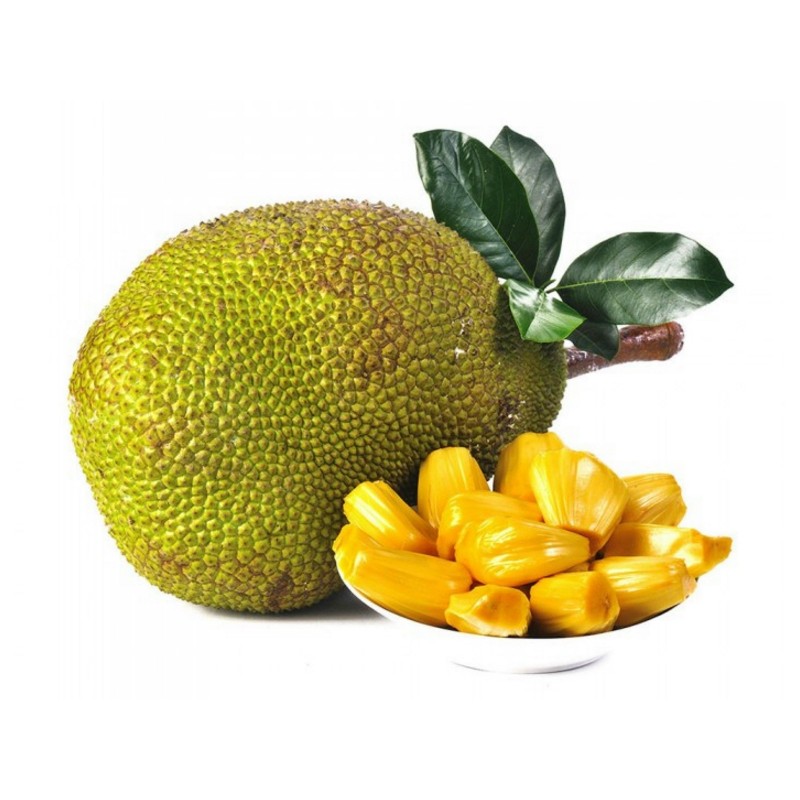 The jackfruit (Artocarpus heterophyllus) is a species of tree of the mulberry family native to parts of South and Southeast Asia. It is well suited to tropical lowlands.

The jackfruit (Artocarpus heterophyllus) is a species of tree of the mulberry family native to parts of South and Southeast Asia. It is well suited to tropical lowlands. Its fruit is the largest tree borne fruit in the world, seldom less than about 25 cm (10 in) in diameter. Even a relatively thin tree, around 10 cm (4 in) diameter, can bear large fruit. The fruits can reach 36 kg (80 lbs) in weight and up to 90 cm (36 in) long and 50 cm (20 in) in diameter. The sweet yellow sheaths around the seeds are about 3–5 mm thick and have a taste similar to that of pineapple, but are milder and less juicy.
Suitable for growing in Frost free positions.

The jackfruit (alternately jack tree, jakfruit, or sometimes simply jack or jak;ചക്ക(Malayalam) फणस fɳs in Marathi language or काथल in Hindustani language; scientific name Artocarpus heterophyllus),[6] is a species of tree in the Artocarpus genus of the mulberry family (Moraceae). It is native to parts of South and Southeast Asia, and is believed to have originated in the southwestern rain forests of India, in present-day Kerala, coastal Karnataka and Maharashtra. The jackfruit tree is well suited to tropical lowlands, and its fruit is the largest tree-borne fruit,[7] reaching as much as 80 pounds (36 kg) in weight and up to 36 inches (90 cm) long and 20 inches (50 cm) in diameter.[8]

The jackfruit tree is widely cultivated in tropical regions of India, Bangladesh, Nepal, Sri Lanka, Vietnam, Thailand, Malaysia, Indonesia, and the Philippines. Jackfruit is also found across Africa, e.g., in Cameroon, Uganda, Tanzania, and Mauritius, as well as throughout Brazil and Caribbean nations such as Jamaica.

The word "jackfruit" comes from Portuguese jaca, which in turn, is derived from the Malayalam language term, chakka (Malayalam Chakka pazham : ചക്ക).[9] When the Portuguese arrived in India at Kozhikode (Calicut) on the Malabar Coast (Kerala) in 1498, the Malayalam name chakka was recorded by Hendrik van Rheede (1678–1703) in the Hortus Malabaricus, vol. iii in Latin. Henry Yule translated the book in Jordanus Catalani's (f. 1321–1330) Mirabilia descripta: the wonders of the East.[10]

The common English name "jackfruit" was used by the physician and naturalist Garcia de Orta in his 1563 book Colóquios dos simples e drogas da India.[11][12] Centuries later, botanist Ralph Randles Stewart suggested it was named after William Jack (1795–1822), a Scottish botanist who worked for the East India Company in Bengal, Sumatra, and Malaysia.[13] This is apocryphal, as the fruit was called a "jack" in English before William Jack was born: for instance, in Dampier's 1699 book, A New Voyage Round the World.[14][15] It is called 'Pala-pazham' in Tamil(பலாப்பழம்), 'Panasa' in Telugu, 'Phanas' in Marathi and 'Halasa' in Karnataka.

The jackfruit has played a significant role in Indian agriculture for centuries. Archeological findings in India have revealed that jackfruit was cultivated in India 3000 to 6000 years[clarification needed] ago. It is also widely cultivated in southeast Asia.

In other areas, the jackfruit is considered an invasive species as in Brazil's Tijuca Forest National Park in Rio de Janeiro. The Tijuca is mostly an artificial secondary forest, whose planting began during the mid-19th century, and jackfruit trees have been a part of the park's flora since its founding. Recently, the species expanded excessively because its fruits, once they had naturally fallen to the ground and opened, were eagerly eaten by small mammals such as the common marmoset and coati. The seeds are dispersed by these animals, which allows the jackfruit to compete for space with native tree species. Additionally, as the marmoset and coati also prey opportunistically on bird's eggs and nestlings, the supply of jackfruit as a ready source of food has allowed them to expand their populations, to the detriment of the local bird populations. Between 2002 and 2007, 55,662 jackfruit saplings were destroyed in the Tijuca Forest area in a deliberate culling effort by the park's management.

The flesh of the jackfruit is starchy and fibrous, and is a source of dietary fibre. The flavor is comparable to a combination of apple, pineapple and banana.[18] Varieties are distinguished according to the characteristics of the fruits' flesh. In Brazil, three varieties are recognized. These are: jaca-dura, or "hard" variety, which has firm flesh and the largest fruits that can weigh between 15 and 40 kilograms each; jaca-mole, or "soft" variety, which bears smaller fruits, with softer and sweeter flesh; and jaca-manteiga, or "butter" variety, which bears sweet fruits, whose flesh has a consistency intermediate between the "hard" and "soft" varieties.[19]

In Kerala, two varieties of jackfruit predominate: varikka (വരിക്ക) and koozha (കൂഴ). Varikka has slightly hard inner flesh when ripe, while the inner flesh of the ripe koozha fruit is very soft and almost dissolving. A sweet preparation called chakka varattiyathu (jackfruit jam) is made by seasoning the varikka fruit flesh pieces in jaggery, which can be preserved and used for many months. Huge jackfruits up to four feet in length with matching girth are sometimes seen in Kerala.

In West Bengal the two varieties are called - khaja kathal & moja kathal. The fruits are either eaten straight or as a side to rice / roti / chira / muri. Sometimes the juice is extracted and either drunk straight or as a side with muri. The extract is sometimes condensed into rubber like delectables and had as candies. The seeds are either boiled or roasted and eaten with salt and hot chillies. They are also used to make spicy side-dishes with rice or roti.

In Mangalore, Karnataka, the varieties are called bakke and imba. The pulp of the imba jackfruit is ground and made into a paste, then spread over a mat and allowed to dry in the sun to create a natural chewy candy.

The young fruit is called polos in Sri Lanka and idichakka or idianchakka in Kerala.

Jackfruit is commonly used in South and Southeast Asian cuisines.[18] It can be eaten raw when ripe, but as the raw unripe fruit is considered inedible, it is best cooked.[18]

Ripe jackfruit is naturally sweet with subtle flavoring. It can be used to make a variety of dishes, including custards, cakes, halo-halo and more. In India, when the Jackfruit is in season, an ice cream chain store called "Naturals" carries Jackfruit flavored ice cream.

The seeds from ripe fruits are edible, are said to have a milky, sweet taste, and may be boiled, baked or roasted. When roasted the flavor of the seeds is comparable to chestnuts. Seeds are used as snacks either by boiling or fire roasted, also used to make desserts. For making the traditional breakfast dish in southern India: idlis, the fruit is used along with rice as an ingredient and jackfruit leaves are used as a wrapping for steaming. Jackfruit dosas can be prepared by grinding jackfruit flesh along with the batter.

The cuisines of India, Nepal, Bangladesh, Sri Lanka, Indonesia, Cambodia, Thailand and Vietnam use cooked young jackfruit.[18] In Indonesia, young jackfruit is cooked with coconut milk as gudeg. In many cultures, jackfruit is boiled and used in curries as a staple food. In northern Thailand, the boiled young jackfruit is used in the Thai salad called tam kanun. In West Bengal the unripe green jackfruit called "aechor" is used as a vegetable to make various spicy curries, side-dishes and as fillings for cutlets & chops. It is especially sought after by vegetarians who substitute this for meat and hence is nicknamed as gacch-patha (tree-mutton). In the Philippines, it is cooked with coconut milk (ginataang langka). In Réunion Island, it is cooked either alone or with animal flesh, such as shrimp or smoked pork. In southern India unriped Jackfruit slices are deep fried to make chips.

Because unripe jackfruit has a meat-like taste, it is used in curry dishes with spices, in Sri Lankan, Andhran, eastern-Indian (Bengali) and (Odisha) and Keralan cuisine. The skin of unripe jackfruit must be peeled first, then the remaining whole jackfruit can be chopped into edible portions and cooked before serving. Young jackfruit has a mild flavor and distinctive meat-like texture and is compared to poultry. Meatless sandwiches have been suggested and are popular with both vegetarian and nonvegetarian populations. Unripe jackfruit is widely known as Panasa Katha in Odisha.

The edible jackfruit is made of soft, easily-digestible flesh (bulbs); when eaten, its simple sugars like glucose and fructose can quickly replenish one's energy and bring on a physical sense of euphoria and revitalization. A portion of 100 g of edible raw jackfruit provides about 95 calories and is a good source of the antioxidant vitamin C, providing about 13.7 mg.[20] Jackfruit seeds are rich in protein.

Fresh jackfruit has small amounts of vitamin-A, flavonoid pigments such as carotene-ß, xanthin, lutein and cryptoxanthin-ß. Together, these compounds play vital roles in antioxidant and vision functions. Vitamin A is also required for maintaining integrity of mucus membranes and skin. Consumption of natural fruits rich in vitamin-A, and carotenes has been found to protect from lung and oral cavity cancers.

Jackfruit can be a good bulk laxative because of its dietary fiber which helps to protect mucous membranes in the colon by decreasing exposure time and binding to cancer-causing chemicals.

In general, the seeds are gathered from the ripe fruit, sun-dried, then stored for use in rainy season in many parts of South Indian states. They are extracted from fully matured fruits and washed in water to remove the slimy part. Seeds should be stored immediately in closed polythene bags for one or two days to prevent them from drying out. Germination is improved by soaking seeds in clean water for 24 hours. During transplanting, sow seeds in line, 30 cm apart, in a nursery bed filled with 70% soil mixed with 30% organic matter.[21] The seedbed should be shaded partially from direct sunlight in order to protect emerging seedlings.

The wood of the tree is used for the production of musical instruments. In Indonesia, hardwood from the trunk is carved out to form the barrels of drums used in the gamelan, and in the Philippines, its soft wood is made into the hull of a kutiyapi, a type of Philippine boat lute. It is also used to make the body of the Indian string instrument veena and the drums mridangam and kanjira; the golden yellow-coloured timber with good grains is used for building furniture and house construction in India. The ornate wooden plank called avani palaka made of the wood of jackfruit tree is used as the priest's seat during Hindu ceremonies in Kerala. In Vietnam, jackfruit wood is prized for the making of Buddhist statuaries in temples.[22]

Jackfruit wood is widely used in the manufacture of furniture, doors and windows, and in roof construction. The heartwood is used by Buddhist forest monastics in Southeast Asia as a dye, giving the robes of the monks in those traditions their distinctive light-brown color.

Outside of its countries of origin, fresh jackfruit can be found at Asian food markets, especially in the Philippines. It is also extensively cultivated in the Brazilian coastal region, where it is sold in local markets. It is available canned in sugar syrup, or frozen. Dried jackfruit chips are produced by various manufacturers. In northern Australia, particularly in Darwin, jackfruit can be found at outdoor produce markets during the dry season. Outside of countries where it is grown, jackfruit can be obtained year-round both canned or dried. It has a ripening season in Asia of late spring to late summer.