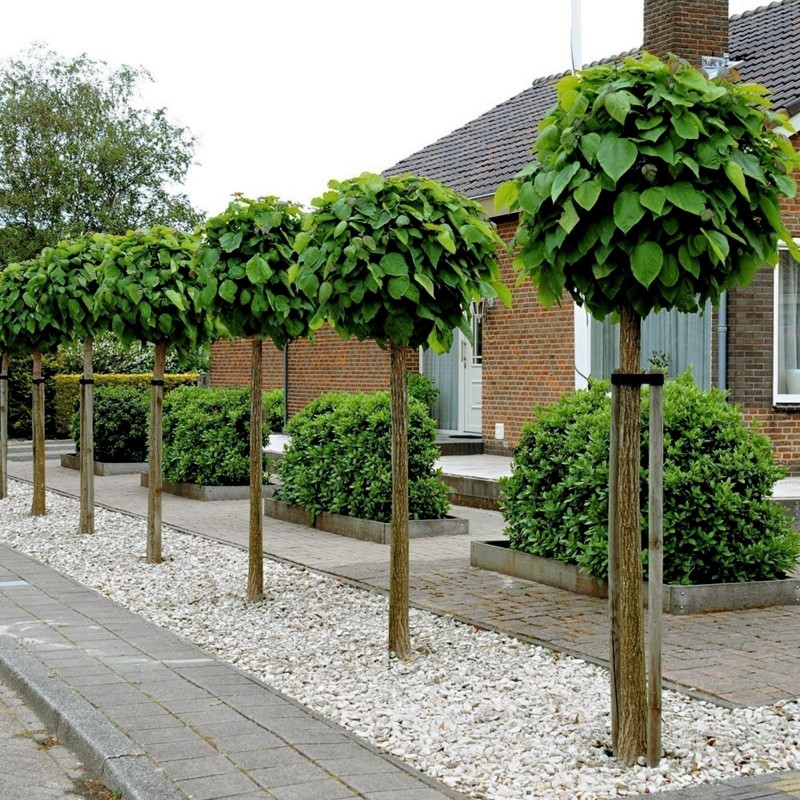 Catalpa, commonly called catalpa or catawba, is a genus of flowering plants in the family Bignoniaceae, native to warm temperate regions of North America, the Caribbean, and East Asia.  Mostly deciduou

Catalpa, commonly called catalpa or catawba, is a genus of flowering plants in the family Bignoniaceae, native to warm temperate regions of North America, the Caribbean, and East Asia. Mostly deciduous trees, they typically grow to 12–18 metres (39–59 ft) tall and 6–12 metres (20–39 ft) wide. A 10-year-old sapling will stand about 6 metres (20 ft) tall. They can be recognized by their large, heart-shaped to three-lobed leaves, showy white or yellow flowers in broad panicles, and in the autumn by their 20–50 centimetres (7.9–20 in) long fruits, which resemble a slender bean pod, containing numerous small flat seeds, each seed having two thin wings to aid in wind dispersal. Because of the leaves, they are sometimes confused with the tung tree (Vernicia fordii) in the southern U.S., or the invasive Paulownia tomentosa imported from China. Due to their large leaf size, catalpas provide very dark shade and are a popular habitat for many birds, providing them good shelter from rain and wind. These trees have very little limb droppage, but drop large, dark brown bean pods during late summer. The wood of catalpas is quite soft. Species The two North American species, Catalpa bignonioides and Catalpa speciosa, have been widely planted outside their natural ranges as ornamental trees for their showy flowers and attractive shape, or growing habit. Northern and southern catalpas are very similar in appearance, but the northern species has slightly larger leaves, flowers, and bean pods. Flowering starts after 275 growing degree days. Catalpa ovata from China, with pale yellow flowers, is also planted outside its natural range for ornamental purposes. Etymology The name derives from the Catawba Native American name catawba for these trees (the tribal totem), with the spelling catalpa being due to a transcription error on the part of the describing botanist (Scopoli) making the first formal scientific description of the genus. The rules of botanical naming state that the spelling used in the formal scientific description has to be retained for the scientific name. The name in vernacular use has very largely (though not completely) followed Scopoli's erroneous transcription, with catawba still in use in some areas of the United States, most particularly within the trees' native range.
The bean-like seed pod is the origin of the alternative vernacular names Indian bean tree and cigar tree for Catalpa bignonioides and Catalpa speciosa, respectively.
Food source The tree is the sole source of food for the catalpa sphinx moth (Ceratomia catalpae), the leaves being eaten by the caterpillars. When caterpillars are numerous, infested trees may be completely defoliated. Defoliated catalpas produce new leaves readily, but with multiple generations occurring, new foliage may be consumed by subsequent broods. Severe defoliation over several consecutive years can cause death of trees. Because the caterpillars are an excellent live bait for fishing, some dedicated anglers plant catalpa mini-orchards for their own private source of "catawba-worms", particularly in the southern states.
Sowing Instructions