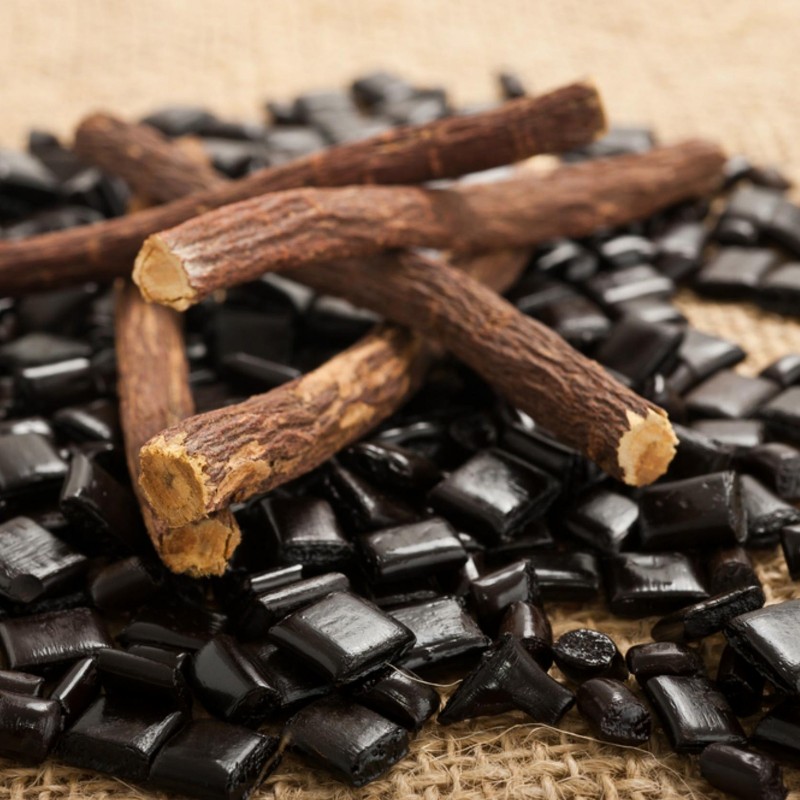 The liquorice plant is a legume (related to beans and peas) and is native to the Mediterranean and cultivated in countries such as Greece, Spain and Italy. It is one of the most commonly

The liquorice plant is a legume (related to beans and peas) and is native to the Mediterranean and cultivated in countries such as Greece, Spain and Italy. It is one of the most commonly used herbs in Western herbal medicine and has a very long history of use as both a medicine and as flavouring. Extracts of the root are used to flavour tobacco, beer, soft drinks and pharmaceutical products, often to disguise unpleasant flavours.
Fresh English liquorice is bright yellowish brown; the root being soft and pliable. The root is harvested in the autumn and is dried for later use. The aroma is strongly reminiscent of anise or fennel. The taste is dominantly sweet, warm and medical.

Liquorice plants are not particularly ornamental, with a disquieting habit of folding up their leaves at the end of the day. This perennial plant grows 90 to 180cm (36 to 72in) tall, it an extensive branching root system. The roots are straight pieces of wrinkled, fibrous wood, which are long and cylindrical and grow horizontally underground. Licorice roots are brown on the outside and yellow on the inside.
In our northerly climate the plant rarely flowers, this benefits it's sweet flavour, as once the plant flowers the sweetness of the root is reduced. They are suitable plants to continue to be grown in large pots. This will control their root system and make it simple to access the roots to utilise if desired.

Liquorice requires a deep well cultivated fertile moisture-retentive soil for good root production. Prefers a sandy soil with abundant moisture and does not flourish in clay. Slightly alkaline conditions produce the best plants. The plant thrives in a maritime climate and are hardy to about -15°C (5°F)

Edible Uses:
The root can be used raw or used as flavouring. The dried root is often used for chewing; it is excellent for teething children and also as a tooth cleaner. A tea made from the roots is an excellent thirst quencher. The powdered root is also used as a sweetener in other herb teas. Glycyrrhizin is said to be up to fifty times sweeter than sugar. In todays confectionery it is often mixed with sugar and treacle.

Medicinal Uses:
Liquorice supplements are made from the roots and underground stems of the plant. The health properties associated with Liquorice are well documented - it contains a natural expectorant so it can help soothe coughs and colds; it offers digestive relief by decreasing the amount of stomach acid and can help reduce stress and anxiety. Excessive consumption is known to be toxic to the liver, cause water retention and raised blood pressure.

Sowing: Sow in spring or autumn under glass
Pre-soak the seed for 24 hours in warm water and sow spring or autumn at around 20°C (68°F) in a greenhouse or cold frame. Seed germination is low and irregular.
Prick out the seedlings into individual pots when they are large enough to handle, and grow them on for their first winter in a greenhouse.
Plant out in well-fertilised soil after last frost in deeply dug fertile moist soil in full sun.

Cultivation:
Plants are slow to settle in and do not produce much growth in their first two years after being moved. The young growth is susceptible to damage by slugs and so the plant will require some protection for its first few years.
Each root if unrestricted can reach a depth of 90 to 120cm (3 to 4 ft) and can extend to 10m (25 ft). For good root development and harvest prevent plant from flowering.
One acre of land can produce 4 to 5 tons every 3 to 4 years.

Propagation:
Divide the plant in spring or autumn. Each division must have at least one growth bud. Autumn divisions can either be replanted immediately or stored in clamps until the spring and then be planted out. Pot up the smaller divisions and grow them on in a cold frame until they are established before planting them out in the spring or summer.

Harvesting:
Dig up the plant in early autumn, cut part of the roots off and replant the plant, it will continue to grow. Cut the root into 20cm (8in) pieces and dry for later use.

Origin:
Glycyrrhiza glabra, commonly known as Liquorice grows wild around the Mediterranean and Asia. It is cultivated in countries such as Greece, Spain and Italy.

Nomenclature:
Dioscorides gave the plant its botanical name Glycyrrhiza. It is taken from the Greek glukos meaning 'sweet' (from which we also get the word glucose) and riza meaning 'root'. Its 13th century English name was Lycorys, a corruption of glycyrrhiza.
The species name glabra means 'smooth' or 'hairless'
In many parts of the world including the U.S. the alternative spelling of Licorice is used.
The root of Glycyrrhiza glabra, the plant from the Mediterranean, including Spain, is sweet enough to be sucked in its raw state. In northern counties of England it is colloquially known as Spanish, supposedly because Spanish monks grew liquorice root at Rievaulx Abbey near Thirsk in Yorkshire.
The dried root of Liquorice were sold as sweets, and commonly called Spanish Wood Stick or Liquorice Wood. They were one of the few sweets sold during the WW2 and during rationing.

History:
European liquorice is a plant with a rich historical tradition. The use of liquorice dates to ancient times; liquorice roots were found in the tomb of Pharaoh Tutankhamen (1358 BC). The ancient Romans and Greeks used liquorice for medicinal uses, such as in coughing syrups or against stomach ulcers. In 1305 Edward the First placed a tax on liquorice imports to finance the repair of the London Bridge.

Liquorice has been grown in England since the Dark Ages and records from the early 16th century show liquorice being grown in fields around Pontefract in Yorkshire. It was brought from the Mediterranean by Dominican monks who settled in the area around Pontefract Castle. The plants didn't flower in the cold climate, but what really mattered were the roots. The Dominicans used the liquorice juice extracted from the roots of the plant primarily as a medicine, for easing coughs and stomach complaints.

The famous Pontefract cakes, also known as pomfrets, were born in 1614 when Sir George Saville first applied a stamp to the small, round liquorice cakes.
Initially, these cakes were consumed as a medicine, then, in 1760, an enterprising apothecary named George Dunhill hit upon the idea of adding sugar to the already famous Pontefract Cakes, turning a primarily medicinal product into an immensely popular sweet. Mr Dunhill then set up his famous firm, and in the following years it became one of the most renowned English manufacturers of liquorice.
Cultivation continued until well into the 19th century, when it finally petered out because of the competition from cheaper imported raw liquorice.

How to make Pontefract Cakes:
The real Pontefract Cakes are made to a special recipe, but here is the basic process.
• The liquorice roots are cleaned, ground and then boiled.
• Sugar is added, along with a thickening agent (usually starch, although Gum Arabic was used originally).
• This raw mass is allowed to dry and cool for about a week, then cut into blocks weighing around seven kg each.
• These blocks are pulled out into a long strand, which is chopped into small rounds by a machine. The rounds are then placed in a press where they are flattened in a mould that applies the traditional Pontefract Cake stamp.