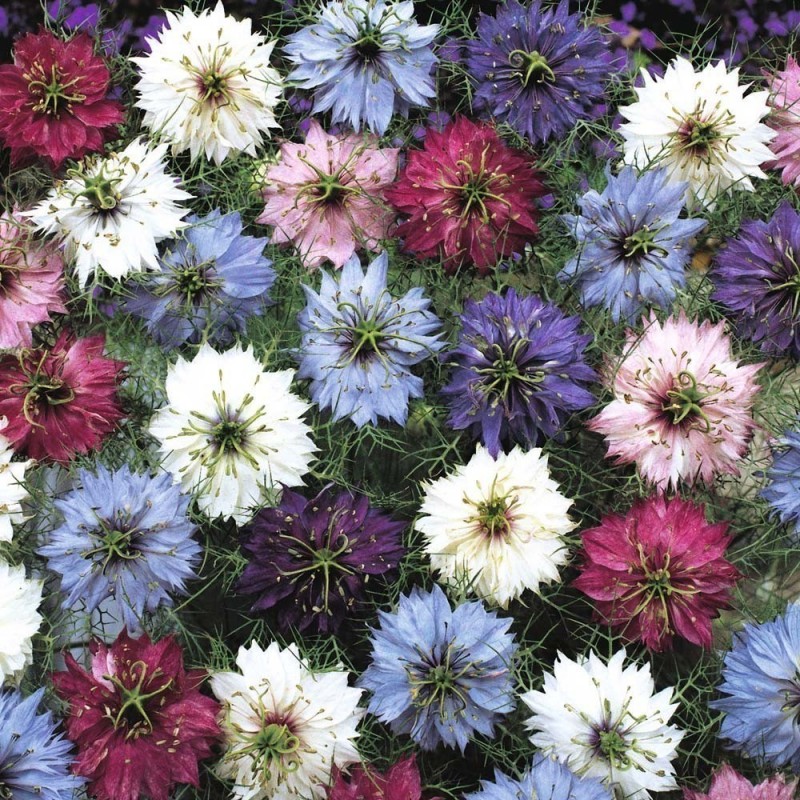 Nigella damascena (love-in-a-mist, ragged lady) is an annual garden flowering plant, belonging to the buttercup family Ranunculaceae. It is native to southern Europe (but adventive in more northern countries

Nigella damascena (love-in-a-mist, ragged lady) is an annual garden flowering plant, belonging to the buttercup family Ranunculaceae. It is native to southern Europe (but adventive in more northern countries of Europe), north Africa and southwest Asia, where it is found on neglected, damp patches of land.

The specific epithet damascena relates to Damascus in Syria.[2] The plant's common name comes from the flower being nestled in a ring of multifid, lacy bracts. It is also sometimes called devil-in-the-bush.

It grows to 20–50 cm (8–20 in) tall, with pinnately divided, thread-like, alternate leaves. The flowers, blooming in early summer, are most commonly different shades of blue, but can be white, pink, or pale purple, with 5 to 25 sepals. The actual petals are located at the base of the stamens and are minute and clawed. The sepals are the only colored part of the perianth. The four to five carpels of the compound pistil have each an erect style.

The fruit is a large and inflated capsule, growing from a compound ovary, and is composed of several united follicles, each containing numerous seeds. This is rather exceptional for a member of the buttercup family. The capsule becomes brown in late summer. The plant self-seeds, growing on the same spot year after year.

This easily grown plant has been a familiar subject in English cottage gardens since Elizabethan times, admired for its ferny foliage, spiky flowers and bulbous seed-heads. It is now widely cultivated throughout the temperate world, and numerous cultivars have been developed for garden use. The most common variety is 'Miss Jekyll' which has blue flowers, but the more recent 'Persian Jewels' is a mixture of white, pink, lavender and blue flowers. 'Persian Rose' is pale pink. Other cultivars are 'Albion', 'Blue Midget', 'Cambridge Blue', 'Mulberry Rose', and 'Oxford Blue'. 'Dwarf Moody Blue' is around 15 cm (6 in) high. The white-flowered cultivar 'Miss Jekyll Alba' has gained the Royal Horticultural Society's Award of Garden Merit.