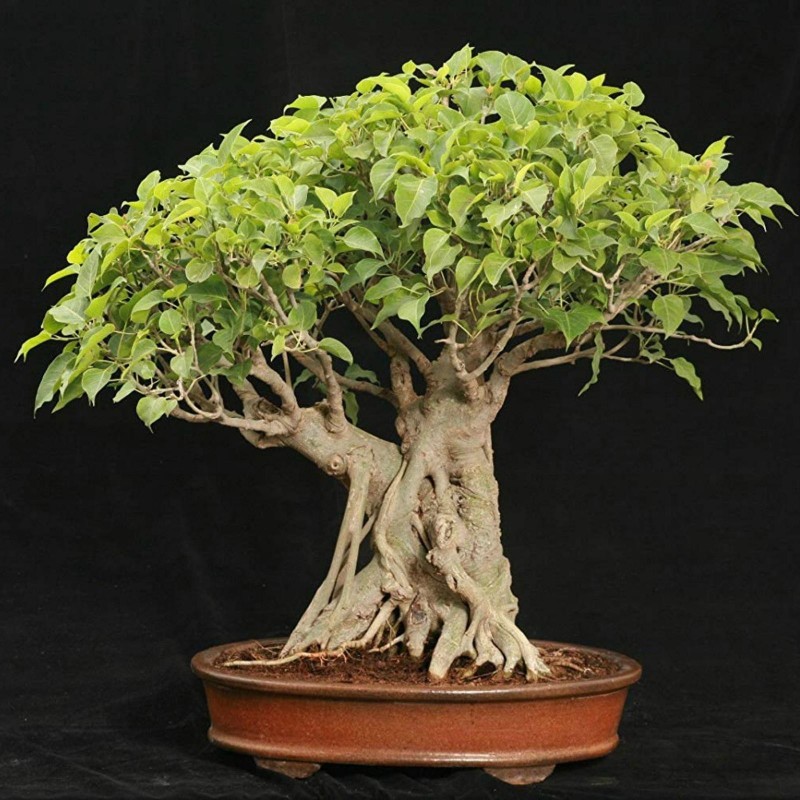 Ficus religiosa or Sacred Fig is species of fig native to India, Bangladesh, Nepal, Pakistan, Sri Lanka, southwest China and Indochina. It belongs to the Moraceae, the fig or mulberry family.

Ficus religiosa or Sacred Fig is species of fig native to India, Bangladesh, Nepal, Pakistan, Sri Lanka, southwest China and Indochina. It belongs to the Moraceae, the fig or mulberry family. It is also known as Bo-Tree (from the Sanskrit Bodhi: "wisdom", "enlightened", and as a Sinhalization of this the Sinhala Bo) or [1] Peepal (in India),.
Ficus religiosa is a large dry season-deciduous or semi-evergreen tree up to 30 metres (98 ft) tall and with a trunk diameter of up to 3 metres (9.8 ft). The leaves are cordate in shape with a distinctive extended tip; they are 10–17 cm long and 8–12 cm broad, with a 6–10 cm petiole. The fruit is a small fig 1-1.5 cm diameter, green ripening to purple.
Buddhist legend tells of Gautama Buddha attained enlightenment (bodhi) while meditating underneath the Bodhi tree, a Ficus religiosa. The site is in present day Bodh Gaya, northern India. The Bodhi tree and the Sri Maha Bodhi propagated from it are notable specimens of Sacred Fig. The known planting date of the latter, 288 BCE, gives it the oldest verified age for any flowering plant (angiosperm).
In Theravada Buddhist Southeast Asia, the tree's massive trunk is often the site of Buddhist or animist shrines.
Not all Ficus religiosa can be called a 'Bodhi tree'. A 'Bodhi tree' must be able to trace its parent to another Bodhi tree and the line goes on until the first Bodhi tree under which the Lord Gautama Buddha gained enlightenment.
Sadhus (Hindu ascetics) still meditate beneath sacred fig trees, and Hindus do pradakshina (circumambulation) around the sacred fig tree as a mark of worship. Usually seven pradakshinas are done around the tree in the morning time chanting "Vriksha Rajaya Namah", meaning "salutation to the king of trees."
Plaksa is a possible Sanskrit term for Ficus religiosa. However, according to Macdonell and Keith (1912), it denotes the Wavy-leaved Fig tree (Ficus infectoria) instead.
In Hindu texts, the Plaksa tree is associated with the source of the Sarasvati River. The Skanda Purana states that the Sarasvati originates from the water pot of Brahma and flows from Plaksa on the Himalayas. According to Vamana Purana 32.1-4, the Sarasvati was rising from the Plaksa tree (Pipal tree).
Plaksa Pra-sravana denotes the place where the Sarasvati appears.[5] In the Rigveda Sutras, Plaksa Pra-sravana refers to the source of the Sarasvati.