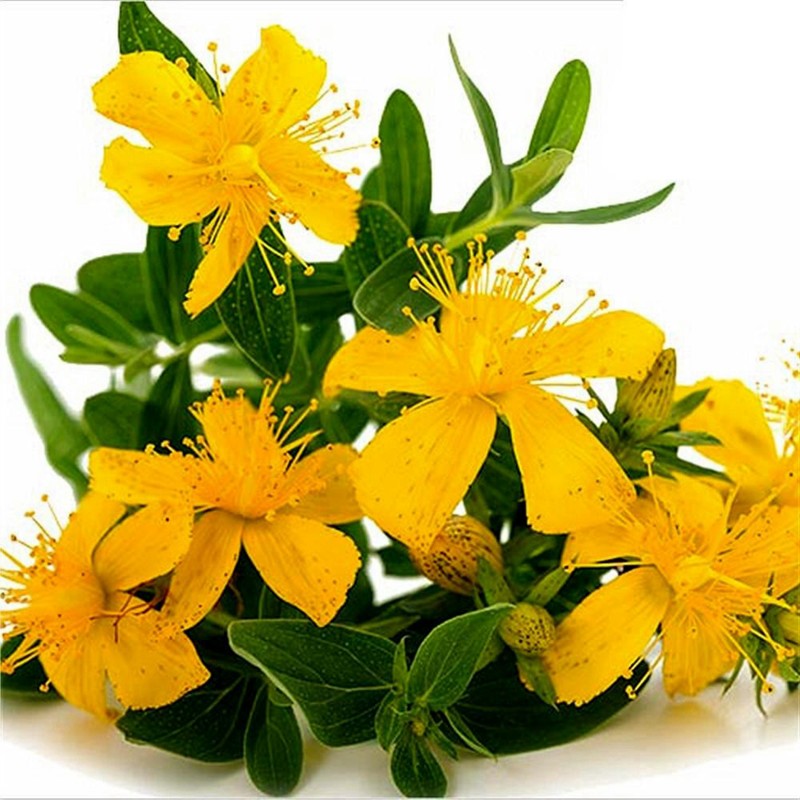 Perforate St John's-wort is most characteristic of relatively unproductive wasteland on free-draining calcareous soils but can be found on a range of habitats including meadows, open woodland, hedgebanks, and roadside verges. It has a deep taproot which allows it to continue to grow late into summer. Regeneration occurs both by vegetative means (axillary shoots and lateral roots) and by seed.

A spring germinating seed best sown in autumn. Perforate St John's-wort can be added to a meadow mixture but, as it contains a toxin activated by bright sunlight, is best avoided if the meadow is to be grazed by stock.

Some studies have supported the use of St John's wort preparations as a treatment for depression in humans. In contrast, the National Center for Complementary and Integrative Medicine of the United States National Institutes of health warns that St. John's wort is not a proven treatment for depression, that it has many drug-drug interactions that can reduce the effectiveness of other medications, and that psychosis can occur as a rare side effect. The FDA has also warned of the potential of St. John's wort to reduce the effectiveness of other medications.

In certain livestock species, it is toxic when ingested and is also considered a weed when growing wild. Hypericum perforatum is indigenous to Europe but has spread worldwide as an invasive species, including to temperate and subtropical regions of Turkey, Ukraine, Russia, the Middle East, India, Canada, the United States and China.

Hypericum perforatum is a yellow-flowering, stoloniferous or sarmentose, perennial herb indigenous to Europe. It has been introduced to many temperate areas of the world and grows wild in many meadows. The herb's common name comes from its traditional flowering and harvesting on St John's day, 24 June. The genus name Hypericum is derived from the Greek words hyper (above) and eikon (picture), in reference to the plant's traditional use in warding off evil by hanging plants over a religious icon in the house during St John's day. The species name perforatum refers to the presence of small oil glands in the leaves that look like windows, which can be seen when they are held against the light.

St John's wort is a perennial plant with extensive, creeping rhizomes. Its stems are erect, branched in the upper section, and can grow to 1 m high. It has opposing, stalkless, narrow, oblong leaves that are 12 mm long or slightly larger. The leaves are yellow-green in color, with transparent dots throughout the tissue and occasionally with a few black dots on the lower surface. Leaves exhibit obvious translucent dots when held up to the light, giving them a ‘perforated’ appearance, hence the plant's Latin name.

Its flowers measure up to 2.5 cm across, have five petals, and are colored bright yellow with conspicuous black dots. The flowers appear in broad cymes at the ends of the upper branches, between late spring and early to mid summer. The sepals are pointed, with glandular dots in the tissue. There are many stamens, which are united at the base into three bundles. The pollen grains are ellipsoidal.

When flower buds (not the flowers themselves) or seed pods are crushed, a reddish/purple liquid is produced.

St John's wort is widely known as a herbal treatment for depression. In some countries, such as Germany, it is commonly prescribed for mild to moderate depression, especially in children and adolescents. Specifically, Germany has a governmental organization called Commission E which regularly performs rigorous studies on herbal medicine. It is proposed that the mechanism of action of St. John's wort is due to the inhibition of reuptake of certain neurotransmitters. The best studied chemical components of the plant are hypericin and pseudohypericin.

An analysis of twenty-nine clinical trials with more than five thousand patients was conducted by Cochrane Collaboration. The review concluded that extracts of St John's wort were superior to placebo in patients with major depression. St John's wort had similar efficacy to standard antidepressants. The rate of side-effects was half that of newer SSRI antidepressants and one-fifth that of older tricyclic antidepressants. A report  from the Cochrane Review states:

In contrast, the National Center for Complementary and Integrative Medicine of the United States National Institutes of health warns that St. John's wort is not a proven treatment for depression, that it has many drug-drug interactions that can reduce the effectiveness of other medications, and that psychosis can occur as a rare side effect. The FDA has also warned of the potential of St. John's wort to reduce the effectiveness of other medications.

A major constituent chemical, hyperforin, may be useful for treatment of alcoholism, although dosage, safety and efficacy have not been studied. Hyperforin has also displayed antibacterial properties against Gram-positive bacteria, although dosage, safety and efficacy has not been studied. Herbal medicine has also employed lipophilic extracts from St John's wort as a topical remedy for wounds, abrasions, burns, and muscle pain. The positive effects that have been observed are generally attributed to hyperforin due to its possible antibacterial and anti-inflammatory effects. For this reason hyperforin may be useful in the treatment of infected wounds and inflammatory skin diseases. In response to hyperforin's incorporation into a new bath oil, a study to assess potential skin irritation was conducted which found good skin tolerance of St John's wort.

A randomized controlled trial of St John's wort found no significant difference between it and placebo in the management of ADHD symptoms over eight weeks. However, the St John's wort extract used in the study, originally confirmed to contain 0.3% hypericin, was allowed to degrade to levels of 0.13% hypericin and 0.14% hyperforin. Given that the level of hyperforin was not ascertained at the beginning of the study, and levels of both hyperforin and hypericin were well below that used in other studies, little can be determined based on this study alone. Hypericin and pseudohypericin have shown both antiviral and antibacterial activities. It is believed that these molecules bind non-specifically to viral and cellular membranes and can result in photo-oxidation of the pathogens to kill them.

A research team from the Universidad Complutense de Madrid (UCM) published a study entitled "Hypericum perforatum. Possible option against Parkinson's disease", which suggests that St John's wort has antioxidant active ingredients that could help reduce the neuronal degeneration caused by the disease.

Recent evidence suggests that daily treatment with St John's wort may improve the most common physical and behavioural symptoms associated with premenstrual syndrome.

St John's wort was found to be less effective than placebo, in a randomized, double-blind, placebo-controlled trial, for the treatment of irritable bowel syndrome.

St John's wort is generally well tolerated, with an adverse effect profile similar to placebo. The most common adverse effects reported are gastrointestinal symptoms, dizziness, confusion, tiredness and sedation. It also decreases the levels of estrogens, such as estradiol, by speeding up its metabolism, and should not be taken by women on contraceptive pills as it upregulates the CYP3A4 cytochrome of the P450 system in the liver.

St John's wort may rarely cause photosensitivity. This can lead to visual sensitivity to light and to sunburns in situations that would not normally cause them. Related to this, recent studies concluded that the extract reacts with light, both visible and ultraviolet, to produce free radicals, molecules that can damage the cells of the body. These can react with vital proteins in the eye that, if damaged, precipitate out, causing cataracts. Another study found that in low concentrations, St. John's wort inhibits free radical production in both cell-free and human vascular tissue, revealing antioxidant properties of the compound. The same study found pro-oxidant activity at the highest concentration tested.

St John's wort is associated with aggravating psychosis in people who have schizophrenia.

Consumption of St. John's wort is discouraged for those with bipolar disorder. There is concern that people with major depression taking St. John’s wort may be at a higher risk for mania.

While St. John's wort shows some promise in treating children, it is advised that it be only done with medical supervision.

The interactions that Saint Johns Wort has with other medications is also well studied and has yielded significant results of drug interactions with medications such as Selective Serotonin Re-uptake Inhibitor (SSRI) antidepressants, warfarin, and birthcontrol. Combining both SJW and SSRI depressants can lead to increased serotonin levels causing a potentially fatal serotonin syndrome. SJW will reduce the effects of warfarin and lead to thrombosis. Combining estrogen containing oral contraceptives with SJW can lead to decreased efficacy of the contraceptive and eventually unplanned pregnancies. These are just a few of the drug interactions that SJW posess. It is also known to decrease the efficacy of HIV medications, Cholesterol medications, as well as transplant medications. It is because of these dangerous drug interactions that it is imperative to speak with your Doctor or Pharmacist before starting any alternative medicines.