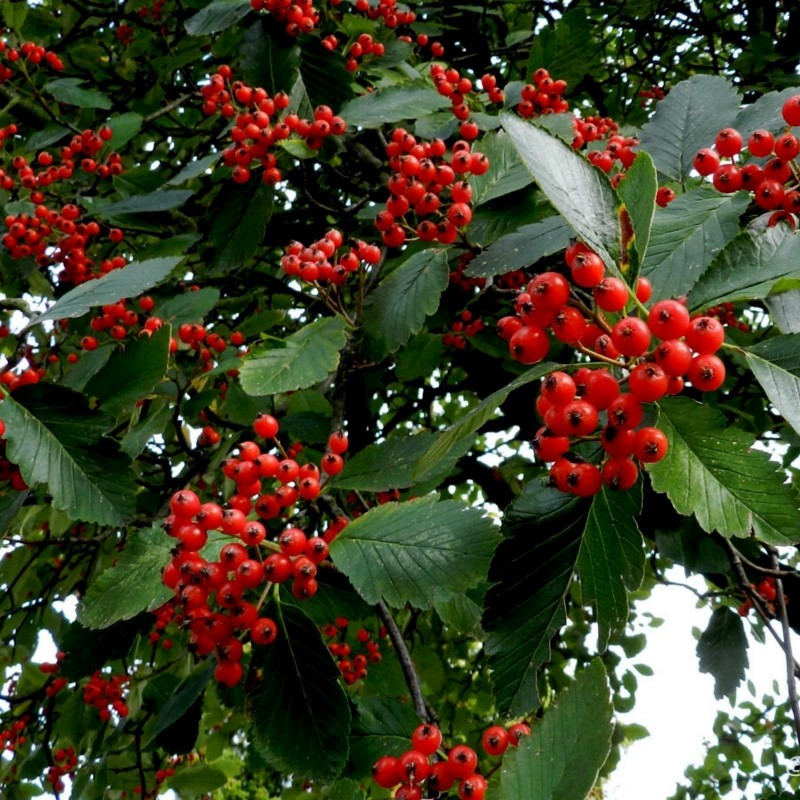 Sorbus intermedia (Swedish Whitebeam) is a species of whitebeam in southern Sweden, with scattered occurrences in easternmost Denmark (Bornholm), the far southwest of Finland), the Baltic States, and

Sorbus intermedia (Swedish Whitebeam) is a species of whitebeam in southern Sweden, with scattered occurrences in easternmost Denmark (Bornholm), the far southwest of Finland), the Baltic States, and northern Poland.

It is a medium-sized deciduous tree growing to 10–20 m tall with a stout trunk usually up to 60 cm, but sometimes as much as 2-3 m diameter,[citation needed] and grey bark; the crown is dome-shaped, with stout horizontal branches. The leaves are green above, and densely hairy with pale grey-white hairs beneath, 7–12 cm long and 5–7 cm broad, with four to seven oval lobes on each side of the leaf, broadest near the middle, rounded at the apex, and finely serrated margins. The autumn color is dull yellowish to grey-brown. The flowers are 15–20 mm diameter, with five white petals and 20 yellowish-white stamens; they are produced in corymbs 8–12 cm diameter in late spring. The fruit is an oval pome 15 mm long and 10 mm diameter, orange-red to red, maturing in mid-autumn. The fruit is dryish and eaten by thrushes and waxwings, which disperse the seeds.

Sorbus intermedia is a triple hybrid between S. aucuparia, S. torminalis, and either S. aria or one of its close relatives.[4][5] It is closely related to Sorbus hybrida (Finnish Whitebeam), another species of hybrid origin, which differs in having the leaves more deeply lobed, with the basal two pairs cut right to the midrib as separate leaflets. Both are tetraploid apomictic species that breed true without pollination.

It is widely grown as an ornamental tree in northern Europe, valued for its tolerance of urban street conditions; it is very commonly used in avenues and urban parks.[1] It is frequently naturalized in the British Isles.[6] In recent years, much new planting of "Swedish Whitebeam" has actually been of the related Sorbus mougeotii (Vosges Whitebeam), another apomictic species from further south in Europe that has more erect branching, less deeply lobed leaves with whiter undersides to the leaves, and darker red fruit.

Propagation:
Seed - best sown as soon as it is ripe in a cold frame[78, 80]. If you have sufficient seed it can be sown in an outdoor seedbed[78, 80]. Stored seed germinates better if given 2 weeks warm then 14 - 16 weeks cold stratification[98], so sow it as early in the year as possible. Prick out the seedlings into individual pots when they are large enough to handle. Seedlings are very slow to put on top-growth for their first year or two[11], but they are busy building up a good root system. It is best to keep them in pots in a cold frame for their first winter and then plant them out into their permanent positions in late spring.