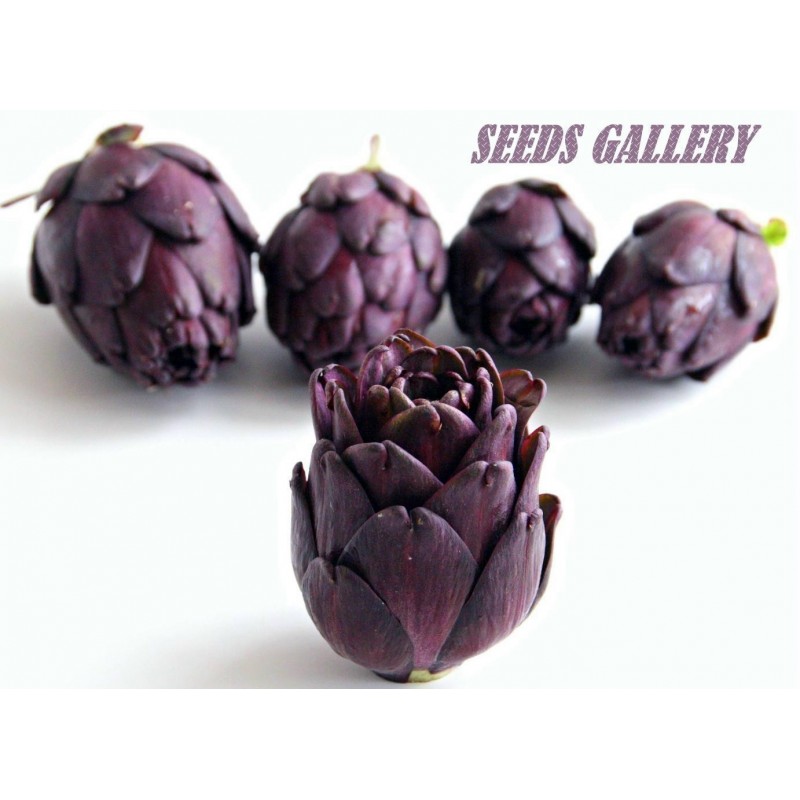 Artichoke ‘Violet de Provence’ is one of the most traditional of Italian vegetables. It is known by a variety of names including Violetta di Provenza, and Poivrade. This delicious medium-sized artichoke

Artichoke ‘Violet de Provence’ is one of the most traditional of Italian vegetables. It is known by a variety of names including Violetta di Provenza, and Poivrade. This delicious medium-sized artichoke develops rich violet-purple headed globes on thistle like plants.
Sow from March to August and harvest between May and July. The plants remain productive for at least three years.

Few dishes are as satisfying to eat as the globe artichoke. Dip the leaves into warm balsamic-bacon dressing and fall in love with a little thistle!

Sow under glass February to March or sow outdoors once the soil has warmed for cropping the following year. Sow the seeds at a depth of 6mm (¼in), they should germinate in 10 to14 days.
Transplant in June to crop in autumn and the following May. They need a position that receives eight hours or more sun per day.
Seed sown outdoors flowers the year after sowing. Sow direct when the soil has warmed up in mid spring for cropping the following year. Sow in free draining soil, 2 to 3 seeds in stations 30cm (12in) apart. Thin out so that there is one good plant every 60cm (24in). The thinnings can be transplanted.
Artichokes need constant moisture: water well. They thrive in moderate climates near the sea where the soil has a high salt content. Seaweed is said to be the best fertiliser possible for these plants.

Cultivation:
Keep the plants well watered until established. Apply a mulch around the stems in May. During the summer months hoe regularly and apply a liquid fertiliser at fortnightly intervals. Water thoroughly when the weather is dry. In late autumn cut down the stems and cover the crowns with bracken, leaves or straw. Remove this protective covering in April.

Harvesting:
Artichokes come in different sizes: baby, medium, and jumbo. All three sizes grow on the same plant. The jumbo grows on the centre stalk, the medium grow on the sides, and the babies at the base. They are not merely immature globes. The globes are harvested before the blossoms open to ensure the best flavour.
The size of a mature artichoke is dependent upon its placement on the plant. Those at the top can be enormous while those at the base, shaded by dense leaves, may grow no larger than a ping-pong ball.
As soon as the petals begin to open, they are overripe, no matter the size. After harvesting the main head, secondary heads will appear and these too can be used.
Expected yield per mature plant: 10 to 12 heads. Productive life: 4 years

Storing:
Artichokes can be stored briefly in plastic bags to preserve their moisture content.

Other Uses:
Artichokes provide wonderful shades of green when used as a natural dye.
Used in the garden they add structure and height to flower beds. In late summer they have beautiful violet-blue flowers.

Origin:
The origin of artichokes is unknown, though they are said to have come from the Maghreb (North Africa), where they are still found in the wild state; the seeds of artichokes, probably cultivated, were found during the excavation of Mons Claudianus in Egypt during the Roman period. Globe artichokes are known to have been cultivated at Naples around the middle of the 9th century.
The Dutch introduced artichokes to England, where they grew in Henry VIII's garden at Newhall in 1530.

Nomenclature:
The various names of the artichoke in European languages all ultimately come from Arabic al-kharshuf, through a Northern Italian dialect word, articiocco.
The Arabic term Ardi-Shoki which means "ground thorny" is a folk etymology of the English name.