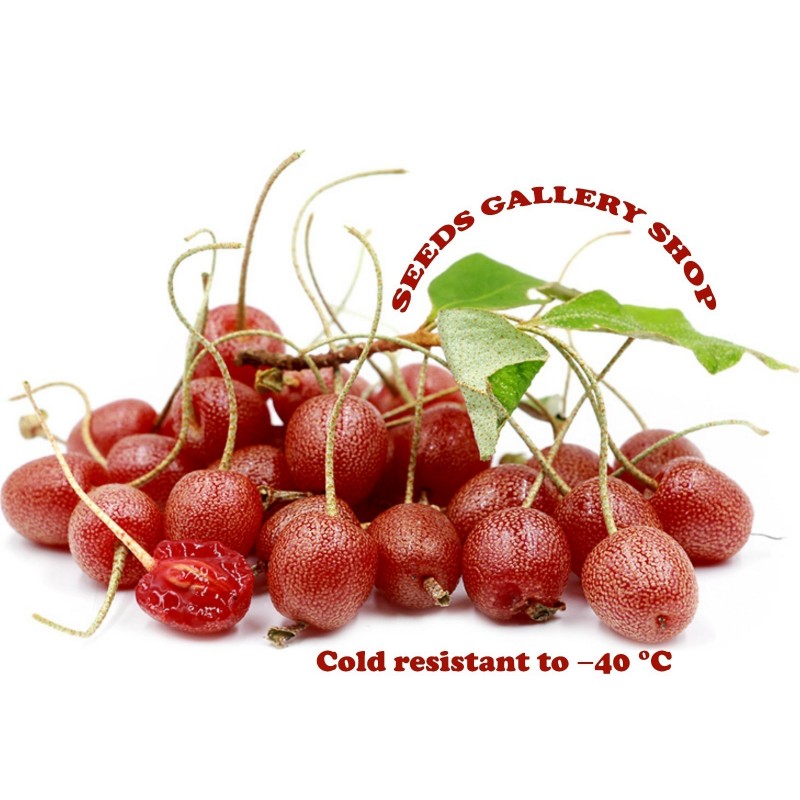 Autumn olives are small in size and are round to oval in shape, growing on a deciduous shrub that can grow as tall as six meters in height. The spotted, matte skin is smooth and is painted in green, pink, and

Autumn olives are small in size and are round to oval in shape, growing on a deciduous shrub that can grow as tall as six meters in height. The spotted, matte skin is smooth and is painted in green, pink, and vibrant red hues. Inside, the opaque pink to red flesh is soft and juicy with one inedible seed in the center. Autumn olives are sweet, but can also be quite tart in taste depending on when they are picked in the season. In addition to the drupes, the leaves on the Autumn olive plant are oval and slightly elongated in shape, with dark green tops and grey to green undersides coated in silver scales. The leaves are also found in an alternating pattern and the edges of the leaves can be slightly rippled. The stem of the shrub is silver to golden brown with thorns and in the early spring cream to light yellow flowers can be found in clusters on the shrub.

Autumn olives are available in the late summer through late fall.

Autumn olives, botanically classified as Elaeagnus umbellata, are known as a drupe, which is a fruit with an outer fleshy membrane and one single seed or pit inside. Also known as Japanese silverberry, Spreading oleaster, Umbellata oleaster, Autumn berries, and Autumn elaeagnus, Autumn olives are believed to have been given their name from their similarity in appearance to the Mediterranean olive tree even though the fruit is not an olive and is more similar to a berry. The Autumn olive plant is prolific and has the ability to thrive in poor soil, pastures, riverbanks, meadows, open woods, and even along roadsides. Originally introduced to North America to help control erosion, the plant quickly spread and has become an invasive species in specific regions of the United States. Though the plant is aggressive in its growth, it also provides a source of food for animals, and home chefs enjoy using the drupes in jams and baked goods.

Autumn olives are high in vitamins A, E, and C and are known for their high content of the antioxidant, lycopene.

Autumn olives are best suited for both raw and cooked applications such as boiling, mashing, and pureeing. They can be used in both sweet and savory applications and are commonly frozen, made into jam, fruit leather, fermented into wine, or even dried and ground into a powder. They can also be used in smoothies and drink recipes. When raw, Autumn olives pair well with yogurt and ice cream. When cooked, Autumn olives pair well with pork chops, chilled soups, and desserts such as crumbles. They will last for a couple of days when stored in a dry and well-ventilated space in the refrigerator.


Autumn olives are used as a key ingredient for health and wellness in Asia. Since it is native to the mountains of Eastern Asia, autumn olives are cultivated for their powerful antioxidants and are found in daily diets in Korea, China, and Japan. Traditional uses of Autumn olives include teas, wines, jams, and ground up into powder for medicine.

Autumn olives originated in Asia with records in China, Japan, and Korea and have been growing since ancient times. They were then brought to the United States in 1830 and used as a solution to wildlife habitat and erosion control. Though it was an excellent solution to those needs, Autumn olives spread quickly and overtook many of the natural habitats earning itself the title of an invasive species. Today Autumn olives can also be found in Great Britain, Asia, Canada, and in the United States.
V 5