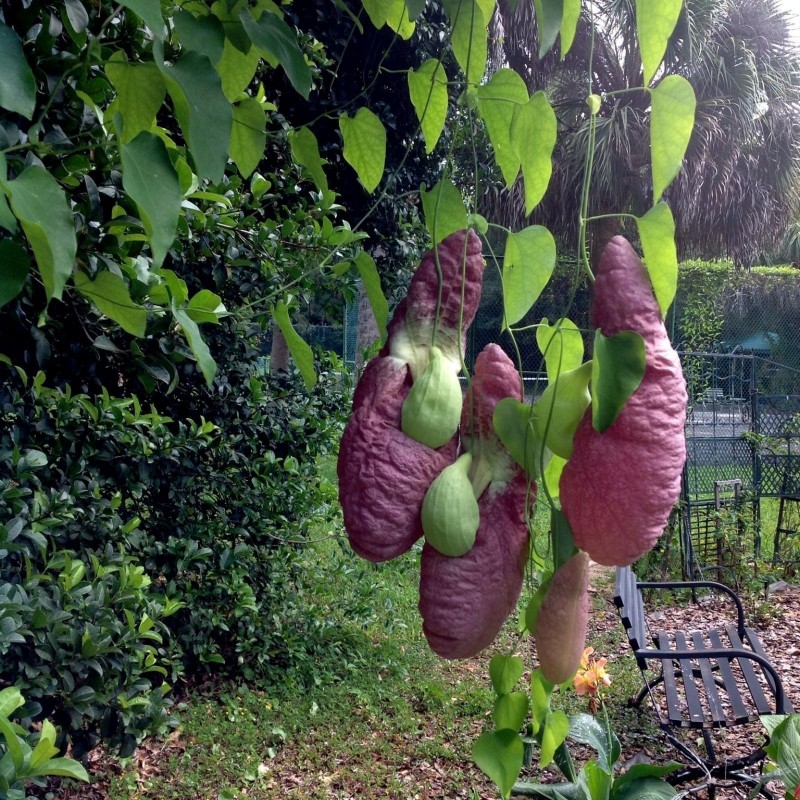 Aristolochia is a large plant genus with over 500 species that is the namesake (type genus) of the family (Aristolochiaceae). Its members are commonly known as birthworts, pipevines or Dutchman's pipes and

Aristolochia is a large plant genus with over 500 species that is the namesake (type genus) of the family (Aristolochiaceae). Its members are commonly known as birthworts, pipevines or Dutchman's pipes and are widespread and occur in the most diverse climates. Some species, like A. utriformis and A. westlandii, are threatened with extinction.

Aristolochia is a genus of evergreen and deciduous woody vines and herbaceous perennials. The smooth stem is erect or somewhat twining. The simple leaves are alternate and cordate, membranous, growing on leaf stalks. There are no stipules.

The flowers grow in the leaf axils. They are inflated and globose at the base, continuing as a long perianth tube, ending in a tongue-shaped, brightly colored lobe. There is no corolla. The calyx is one to three whorled, and three to six toothed. The sepals are united (gamosepalous). There are six to 40 stamens in one whorl. They are united with the style, forming a gynostemium. The ovary is inferior and is four to six locular.

These flowers have a specialized pollination mechanism. The plants are aromatic and their strong scent[2] attracts insects. The inner part of the perianth tube is covered with hairs, acting as a fly-trap. These hairs then wither to release the fly, covered with pollen.

The fruit is dehiscent capsule with many endospermic seeds.

The common names "Dutchman's pipe" and "pipevine" (e.g. common pipevine, A. durior) are an allusion to old-fashioned meerschaum pipes at one time common in the Netherlands and northern Germany. "Birthwort" (e.g. European birthwort A. clematitis) refers to these species' flower shape, resembling a birth canal. Some reference books[3][4] state that the scientific name Aristolochia was developed from Ancient Greek aristos (άριστος) "best" + locheia (λοχεία), "childbirth" or "childbed," but according to an ancient tradition recorded in the first century BCE by Cicero the plant was named for the otherwise unknown individual with the common Greek name Aristolochos, who had learned from a dream that it was an antidote for snake bites.

As of 2013, it has been confirmed that naturally occurring carcinogenic compounds have been found in plants within the genus Aristolochia.

The species Aristalochia clematitis was highly regarded as a medicinal plant since the ancient Egyptians, Greeks and Romans, and on to until the Early Modern era; it also plays a role in traditional Chinese medicine. Due to its resemblance to the uterus, the doctrine of signatures held that "birthwort" was useful in childbirth. A preparation was given to women upon delivery to expel the placenta, as noted by the herbalist Dioscurides in the first century CE. Despite its presence in ancient medicine, Aristolochia is known to contain the lethal toxin aristolochic acid. Aristolochic acid was linked to aristolochic acid-associated urothelial cancer in a Taiwanese study in 2012.[7] In 2013, two studies reported that aristolochic acid is a strong carcinogen. Whole-genome and exome analysis of individuals with a known exposure to aristolochic acid revealed a higher rate of somatic mutation in DNA.

The Bencao Gangmu, compiled by Li Shi-Zhen in the latter part of the sixteenth century, was based on the author’s experience and on data obtained from earlier herbals; this Chinese herbal classic describes 1892 "drugs" (with 1110 drawings), including many species of Aristolochia.[10] For 400 years, the Bencao Gangmu remained the principal source of information in traditional Chinese medicine and the work was translated into numerous languages, reflecting its influence in countries other than China. In the mid-twentieth century, the Bencao Gangmu was replaced by modern Materia Medica, the most comprehensive source being Zhong Hua Ben Cao (Encyclopedia of Chinese Materia Medica), published in 1999.[11] The Encyclopedia lists 23 species of Aristolochia, though with little mention of toxicity. The Chinese government currently lists the following Aristolochia herbs: A. manshuriensis (stems), A. fangchi (root), A. debilis (root and fruit), and A. contorta ( fruit), two of which (mou dou ling and quingmuxiang) appear in the 2005 Pharmacopoeia of the People's Republic of China.

In traditional Chinese medicine Aristolochia species are used for certain forms of acute arthritis and edema.  In 1993, a series of end-stage renal disease cases was reported[13][15] from Belgium associated with a weight loss treatment, where Stephania tetrandra in a herbal preparation was suspected of being substituted with Aristolochia fangchi.[16][17] More than 105 patients were identified with nephropathy following the ingestion of this preparation from the same clinic from 1990 to 1992. Many required renal transplantation or dialysis.

Aristolochia has been shown to be both a potent carcinogen and kidney toxin. Herbal compounds containing Aristolochia are classified as a Group 1 carcinogen by the International Agency for Research on Cancer.[19] Epidemiological and laboratory studies have identified Aristolochia to be a dangerous kidney toxin; Aristolochia has been shown associated with more than 100 cases of kidney failure.[20] Furthermore, it appears as if contamination of grain with European birthwort (A. clematitis) is a cause of Balkan nephropathy, a severe renal disease occurring in parts of southeast Europe.

Despite the toxic properties of aristolochic acid, naturopaths claim that a decoction of birthwort stimulates the production and increases the activity of white blood cells, or that pipevines contain a disinfectant which assists in wound healing. Also, Aristolochia bracteolata is colloquially known as "worm killer" due to supposed antihelminthic activity.

Aristolochia taxa have also been used as reptile repellents. A. serpentaria (Virginia snakeroot) is thus named because the root was used to treat snakebite, as "so offensive to these reptiles, that they not only avoid the places where it grows, but even flee from the traveler who carries a piece of it in his hand".[22] A. pfeiferi, A. rugosa, and A. trilobata are also used in folk medicine to cure snakebites.

Due to their spectacular flowers, several species are used as ornamental plants, notably the hardy A. durior of eastern North America, which was one of John Bartram's many introductions to British gardens; in 1761 Bartram sent seeds he had collected in the Ohio River Valley to Peter Collinson in London, and Collinson gave them to the nurseryman James Gordon at Mile End to raise. The vine was soon adopted for creating for arbors "a canopy impenetrable to the rays of the sun, or moderate rain," as Dr John Sims noted in The Botanical Magazine, 1801.

Growing A Dutchman’s Pipe From Seeds

Once the seeds are soaked for 48 hours, plant them in a moistened mixture of 1 part perlite to 5 parts potting soil. Plant two seeds about ½ inch apart in a 4-inch pot. Press them lightly into the soil surface. Move the pots with the Dutchman’s pipe seeds into a room with plenty of sunlight. Cover the pot with plastic wrap and use a propagation mat to warm the containers, roughly 75 to 85 degrees Fahrenheit (23 to 29 C.). You’ll need to check the soil daily to see if it is dry. Whenever the surface feels barely damp, give the pot an inch of water with a spray bottle. Once you have planted the Dutchman’s pipe seeds and given them appropriate water, you have to be patient. Starting Dutchman’s pipe from seeds takes time. You might see the first sprouts in a month. More can grow over the following two months. Once seeds in a pot sprout, move it out of the direct sun and remove the propagation mat. If both seeds sprout in one pot, remove the weaker one. Allow the stronger seedling to grow in an area of light shade all summer. In autumn, the seedling will be ready for transplant.