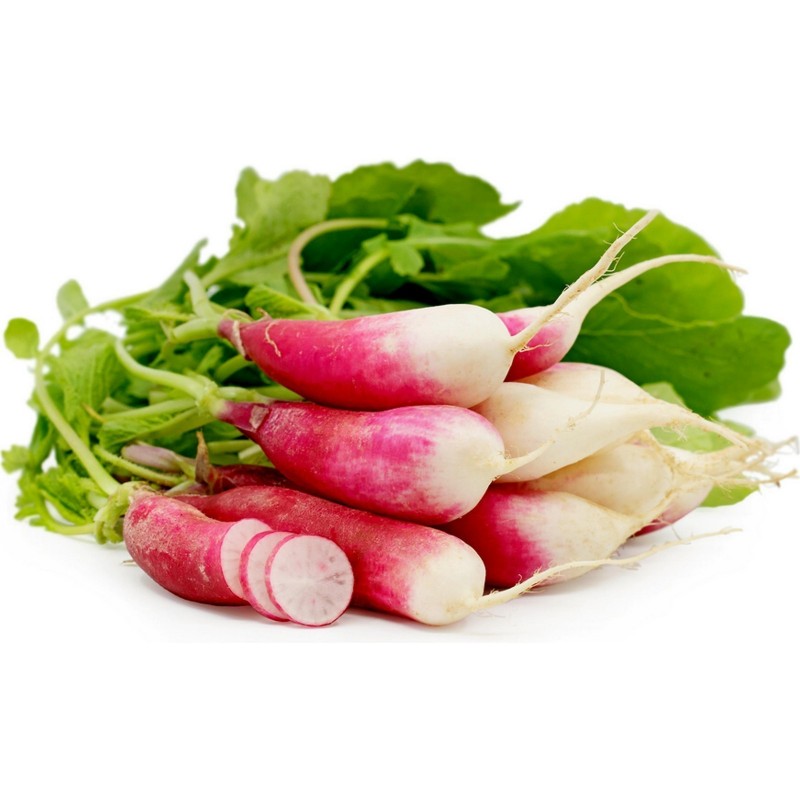 High-quality half-long, cylindrical radishes are tasty and tender.  When you bite into Radish Flamboyant Sabina, the first reaction is WOW. The flavor really is refreshingly strong, crisp, and clean. It's just what the summer salads need. Not spicy. 28-32 days. Direct seed in early spring and again in fall.

High quality half-long, cylindrical radishes is tasty and tender.  When you bite into Radish Flamboyant Sabina, the first reaction is WOW. The flavour really is refreshingly strong, crisp and clean. It's just what the summer salads needs. Not spicy. 28-32 days. Direct seed in early spring and again in fall. The radish (Raphanus sativus) is an edible root vegetable of the Brassicaceae family that was domesticated in Europe, in pre-Roman times. They are grown and consumed throughout the world. Radishes have numerous varieties, varying in size, color and duration of required cultivation time. There are some radishes that are grown for their seeds; oilseed radishes are grown, as the name implies, for oil production. Radish can sprout from seed to small plant in as little as 3 days.
History
The descriptive Greek name of the genus Raphanus means "quickly appearing" and refers to the rapid germination of these plants. Raphanistrum, from the same Greek root, is an old name once used for this genus. The common name "radish" is derived from Latin radix (root). The radish has been used over many centuries.
Although the radish was a well-established crop in Hellenistic and Roman times, which leads to the assumption that it was brought into cultivation at an earlier time, Zohary and Hopf note that "there are almost no archeological records available" to help determine its earlier history and domestication. Wild forms of the radish and its relatives, the mustards and turnip, can be found over west Asia and Europe, suggesting that their domestication took place somewhere in that area. However Zohary and Hopf conclude, "Suggestions as to the origins of these plants are necessarily based on linguistic considerations."

Radishes grow best in full sun and light, sandy loams with pH 6.5–7.0. They are in season from April to June and from October to January in most parts of North America; in Europe and Japan they are available year-round due to the plurality of varieties grown.
Summer radishes mature rapidly, with many varieties germinating in 3–7 days, and reaching maturity in three to four weeks. Harvesting periods can be extended through repeated plantings, spaced a week or two apart.
As with other root crops, tilling the soil to loosen it up and remove rocks helps the roots grow. However, radishes are used in no-till farming to help reverse compaction.
Most soil types will work, though sandy loams are particularly good for winter and spring crops, while soils that form a hard crust can impair growth. The depth at which seeds are planted affects the size of the root, from 1 cm (0.4 in) deep recommended for small radishes to 4 cm (1.6 in) for large radishes.
Radishes are a common garden crop in the U.S., and the fast harvest cycle makes them a popular choice for children's gardens.
In temperate climates, it's customary to plant radishes every two weeks from early spring until a few weeks before the first frost, except during periods of hot weather. In warm-weather climates, they are normally planted in the fall.