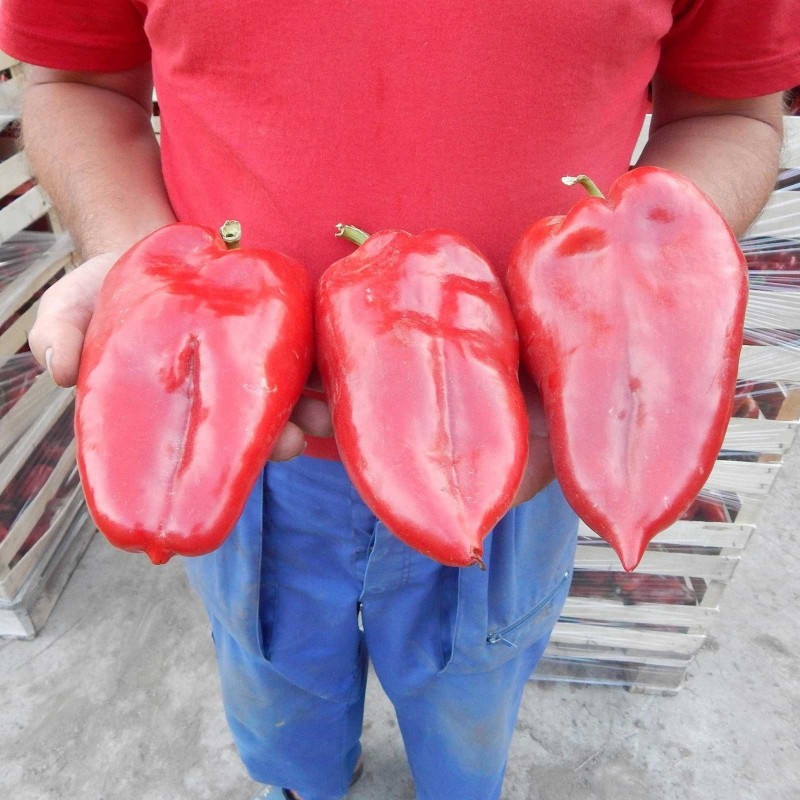 Price is for package of 50 seeds.

Big fruity, aromatic. Elephant ear is one of the favorite Serbian varieties in Serbia, it is mostly used for making "ajvar", "pinđur", stuffing as well as for deep freezing. They can be used well for pickling, for grilling, in vegetable dishes

Price is for package of 50 seeds.

Big fruity, aromatic. Elephant ear is one of the favorite Serbian varieties in Serbia, it is mostly used for making "ajvar", "pinđur", stuffing as well as for deep freezing. They can be used well for pickling, for grilling, in vegetable dishes, in meat dishes, and as a salad.

Elephant's Ear is sweet pepper, with very large and fleshy fruits. The color of the fruit changes from dark green to bright red when ripe. Reaches a weight of 150-350gr.  It is very disease resistant and provides a stable yield of 50/60 tons per acre. This variety is suitable for the greenhouse, for cold frames, and also for outdoors.

Capsicum (/ˈkæpsɪkəm, also known as peppers) is a genus of flowering plants in the nightshade family Solanaceae. Its species are native to the Americas, where they have been cultivated for thousands of years. Following the Columbian Exchange, it has become cultivated worldwide, and it has also become a key element in many cuisines. In addition to use as spices and food vegetables, Capsicum species have also been used as medicines and lachrymatory agents.

Etymology and names
The generic name may come from Latin capsa 'box', presumably alluding to the pods or the Greek word κάπτω kapto 'to gulp'.[4][5][6] The name "pepper" comes from the similarity of the flavor to black pepper, Piper nigrum, although there is no botanical relationship with it or with Sichuan pepper. The original term, chilli (now chile in Mexico) came from the Nahuatl word chīlli, denoting a larger Capsicum variety cultivated at least since 3000 BC, as evidenced by remains found in pottery from Puebla and Oaxaca.

The fruit of Capsicum plants have a variety of names depending on place and type. The piquant (spicy) varieties are commonly called chili peppers, or simply "chilis". The large, mild form is called "red (bell) pepper", "green (bell) pepper", or just "bell pepper" (depending on color) in North America and United Kingdom and typically "capsicum" in New Zealand,[8] Australia, Singapore and India. The fruit is called "paprika" in some other countries (although paprika can also refer to the powdered spice made from various capsicums).

Growing conditions
Ideal growing conditions for peppers include a sunny position with warm, loamy soil, ideally 21 to 29 °C (70 to 84 °F), that is moist but not waterlogged.[9] Extremely moist soils can cause seedlings to "damp-off" and reduce germination.

The plants are sensitive to frost. For flowering, Capsicum is a non-photoperiod-sensitive crop. The flowers can self-pollinate. However, at extremely high temperature, 92 to 100 °F (33 to 38 °C), pollen loses viability, and flowers are much less likely to pollinate successfully.

Species and varieties
Capsicum consists of 20–27 species,[11] five of which are domesticated: C. annuum, C. baccatum, C. chinense, C. frutescens, and C. pubescens.[12] Phylogenetic relationships between species have been investigated using biogeographical,[13] morphological,[14] chemosystematic,[15] hybridization,[16] and genetic[11] data. Fruits of Capsicum can vary tremendously in color, shape, and size both between and within species, which has led to confusion over the relationships among taxa.[17] Chemosystematic studies helped distinguish the difference between varieties and species. For example, C. baccatum var. baccatum had the same flavonoids as C. baccatum var. pendulum, which led researchers to believe the two groups belonged to the same species.

Many varieties of the same species can be used in many different ways; for example, C. annuum includes the "bell pepper" variety, which is sold in both its immature green state and its red, yellow, or orange ripe state. This same species has other varieties, as well, such as the Anaheim chiles often used for stuffing, the dried ancho (also sometimes referred to as poblano) chile used to make chili powder, the mild-to-hot jalapeño, and the smoked, ripe jalapeño, known as chipotle.

Peru is thought to be the country with the highest cultivated Capsicum diversity since varieties of all five domesticates are commonly sold in markets in contrast to other countries. Bolivia is considered to be the country where the largest diversity of wild Capsicum peppers are consumed. Bolivian consumers distinguish two basic forms: ulupicas, species with small round fruits including C. eximium, C. cardenasii, C. eshbaughii, and C. caballeroi landraces; and arivivis, with small elongated fruits including C. baccatum var. baccatum and C. chacoense varieties.

Most of the capsaicin in a pungent (hot) pepper is concentrated in blisters on the epidermis of the interior ribs (septa) that divide the chambers, or locules, of the fruit to which the seeds are attached.[19] A study on capsaicin production in fruits of C. chinense showed that capsaicinoids are produced only in the epidermal cells of the interlocular septa of pungent fruits, that blister formation only occurs as a result of capsaicinoid accumulation, and that pungency and blister formation are controlled by a single locus, Pun1, for which there exist at least two recessive alleles that result in non-pungency of C. chinense fruits.

The amount of capsaicin in hot peppers varies significantly among varieties, and is measured in Scoville heat units (SHU). The world's current hottest known pepper as rated in SHU is the 'Carolina Reaper,' which had been measured at over 2,200,000 SHU.

Genetics
Most Capsicum species are 2n=2x=24. A few of the non-domesticated species are 2n=2x=32.[23] All are diploid. The Capsicum annuum and Capsicum chinense genomes were completed in 2014. The Capsicum annuum genome is approximately 3.48 Gb, making it larger than the human genome. Over 75% of the pepper genome is composed of transposable elements, mostly Gypsy elements, distributed widely throughout the genome. The distribution of transposable elements is inversely correlated with gene density. Pepper is predicted to have 34,903 genes, approximately the same number as both tomato and potato, two related species within the Solanaceae family.

Breeding
Many types of peppers have been bred for heat, size, and yield. Along with selection of specific fruit traits such as flavor and color, specific pest, disease and abiotic stress resistances are continually being selected. Breeding occurs in several environments dependent on the use of the final variety including but not limited to: conventional, organic, hydroponic, green house and shade house production environments.

Capsaicin in Capsicum.
The fruit of most species of Capsicum contains capsaicin (methyl-n-vanillyl nonenamide), a lipophilic chemical that can produce a strong burning sensation (pungency or spiciness) in the mouth of the unaccustomed eater. Most mammals find this unpleasant, whereas birds are unaffected. The secretion of capsaicin protects the fruit from consumption by insects and mammals, while the bright colors attract birds that will disperse the seeds.

Capsaicin is present in large quantities in the placental tissue (which holds the seeds), the internal membranes, and to a lesser extent, the other fleshy parts of the fruits of plants in this genus. The seeds themselves do not produce any capsaicin, although the highest concentration of capsaicin can be found in the white pith around the seeds.

The amount of capsaicin in the fruit is highly variable and dependent on genetics and environment, giving almost all types of Capsicum varied amounts of perceived heat. The most recognizable Capsicum without capsaicin is the bell pepper, a cultivar of Capsicum annuum, which has a zero rating on the Scoville scale. The lack of capsaicin in bell peppers is due to a recessive gene that eliminates capsaicin and, consequently, the "hot" taste usually associated with the rest of the Capsicum family.[32] There are also other peppers without capsaicin, mostly within the Capsicum annuum species, such as the cultivars Giant Marconi, Yummy Sweets, Jimmy Nardello,[35] and Italian Frying peppers[36](also known as the Cubanelle).

Chili peppers are of great importance in Native American medicine, and capsaicin is used in modern medicine—mainly in topical medications—as a circulatory stimulant and analgesic. In more recent times, an aerosol extract of capsaicin, usually known as capsicum or pepper spray, has become used by law enforcement as a nonlethal means of incapacitating a person, and in a more widely dispersed form for riot control, or by individuals for personal defense. Pepper in vegetable oils, or as an horticultural product[37] can be used in gardening as a natural insecticide.

Although black pepper causes a similar burning sensation, it is caused by a different substance—piperine.
Synonyms and common names
The name given to the Capsicum fruits varies between English-speaking countries.

In Australia, New Zealand, and India, heatless varieties are called "capsicums", while hot ones are called "chilli"/"chillies" (double L). Pepperoncini are also known as "sweet capsicum". The term "bell peppers" is almost never used, although C. annuum and other varieties which have a bell shape and are fairly hot, are often called "bell chillies".

In Ireland and the United Kingdom, the heatless varieties are commonly known simply as "peppers" (or more specifically "green peppers", "red peppers", etc.), while the hot ones are "chilli"/"chillies" (double L) or "chilli peppers".

In Polish and in Hungarian, the term papryka and paprika (respectively) is used for all kinds of capsicums (the sweet vegetable, and the hot spicy), as well as for dried and ground spice made from them (named paprika in both U.S. English and Commonwealth English). Also, fruit and spice can be attributed as papryka ostra (hot pepper) or papryka słodka (sweet pepper). The term pieprz (pepper) instead means only grains or ground black pepper (incl. the green, white, and red forms), but not capsicum. Sometimes, the hot capsicum spice is also called chilli.

In Italy and the Italian- and German-speaking parts of Switzerland, the sweet varieties are called peperone and the hot varieties peperoncino (literally "small pepper"). In Germany, the heatless varieties as well as the spice are called Paprika and the hot types are primarily called Peperoni or Chili while in Austria, Pfefferoni is more common for these; in Dutch, this word is also used exclusively for bell peppers, whereas chilli is reserved for powders, and hot pepper variants are referred to as Spaanse pepers (Spanish peppers). In Switzerland, though, the condiment powder made from capsicum is called Paprika (German language regions) and paprica (French and Italian language region). In French, capsicum is called poivron or piment.

In Spanish-speaking countries, many different names are used for the varieties and preparations. In Mexico, the term chile is used for "hot peppers", while the heatless varieties are called pimiento (the masculine form of the word for pepper, which is pimienta). Several other countries, such as Chile, whose name is unrelated, Perú, Puerto Rico, and Argentina, use ají. In Spain, heatless varieties are called pimiento and hot varieties guindilla. Also, in Argentina and Spain, the variety C. chacoense is commonly known as "putaparió", a slang expression equivalent to "damn it", probably due to its extra-hot flavour.

In Indian English, the word "capsicum" is used exclusively for Capsicum annuum. All other varieties of hot capsicum are called chilli. In northern India and Pakistan, C. annuum is also commonly called shimla mirch in the local language and as "Kodai Mozhagai" in Tamil which roughly translates to "umbrella chilli" due to its appearance. Shimla, incidentally, is a popular hill-station in India (and mirch means chilli in local languages).

In Japanese, tōgarashi (唐辛子, トウガラシ "Chinese mustard") refers to hot chili peppers, and particularly a spicy powder made from them which is used as a condiment, while bell peppers are called pīman (ピーマン, from the French piment or the Spanish pimiento).
PP 56 (50 S)
99914 Items