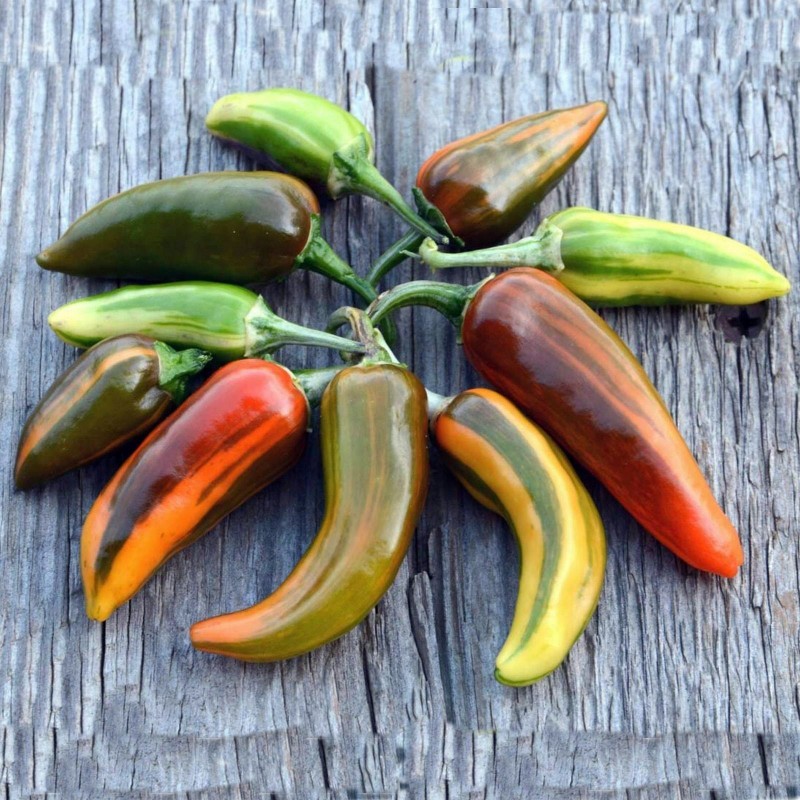 An unusual African American Heirloom variety originally used with fish and shellfish.  The 3in fruits range in colour from green, orange, brown, white stripes eventually maturing to red, being spicy and hot.

An unusual African American Heirloom variety originally used with fish and shellfish.  The 3in fruits range in colour from green, orange, brown, white stripes eventually maturing to red, being spicy and hot.  The foliage really makes these stand out with stunning variegated white and green mottled leaves on compact 2 ft plants.

Transplant to individual containers when seedlings have at least two pairs of leaves.

When 4-5 inches plant 24" apart in greenhouse/conservatory with root ball 1/2" below the soil surface.

Keep moist and feed when flowering with tomato type fertiliser.

Harvest when fruits have reached full-size and full colour.

The fish pepper is a pepper cultivar of the species Capsicum annuum. Originating in the Caribbean, it is believed that the fish pepper was brought to the U.S. in the 19th century, where it grew in popularity in the Mid-Atlantic (particularly in Baltimore and in Philadelphia). In these cities, the pepper became a popular ingredient among the Black community and was commonly used in many crab and oyster houses (hence the name "fish pepper"). [1] Due to urbanization, fish peppers declined in popularity in the early 20th century, nearly disappearing. However, it was saved in the 1940s thanks to Horace Pippin, a Black folk painter who lived in Pennsylvania, who provided seeds to H. Ralph Weaver, a beekeeper, in exchange for honey bees. The bees were sought as a folk remedy to treat arthritis.[2] The seeds stayed within the Weaver family, until Weaver's grandson, William Woys Weaver, introduced the seeds to the public via the Seed Savers Exchange Yearbook in 1995.[1] As a result, the fish pepper has regained some of its original popularity, with some Mid-Atlantic restaurants using it today.

The color of the fruit range from green, orange, brown, white and red, being spicy and hot. What really makes this pepper stand out is its wonderful foliage, as the 2’ tall plants have stunning white and green mottled leaves, which makes this variety superb for ornamental and edible landscaping.[2]

Fish peppers have a vibrant appearance, making them popular as ornamental peppers. As they grow, their color varies greatly, progressing from an initial creamy white color to red when they mature. Fish peppers are typically hot peppers, and their heat can range from 5,000 to 30,000 on the Scoville scale.[1] The peppers grow to roughly 1.5 to 2 inches (3.8 to 5.1 cm) long, with the plant itself growing to roughly 2 feet (61 cm) in height.