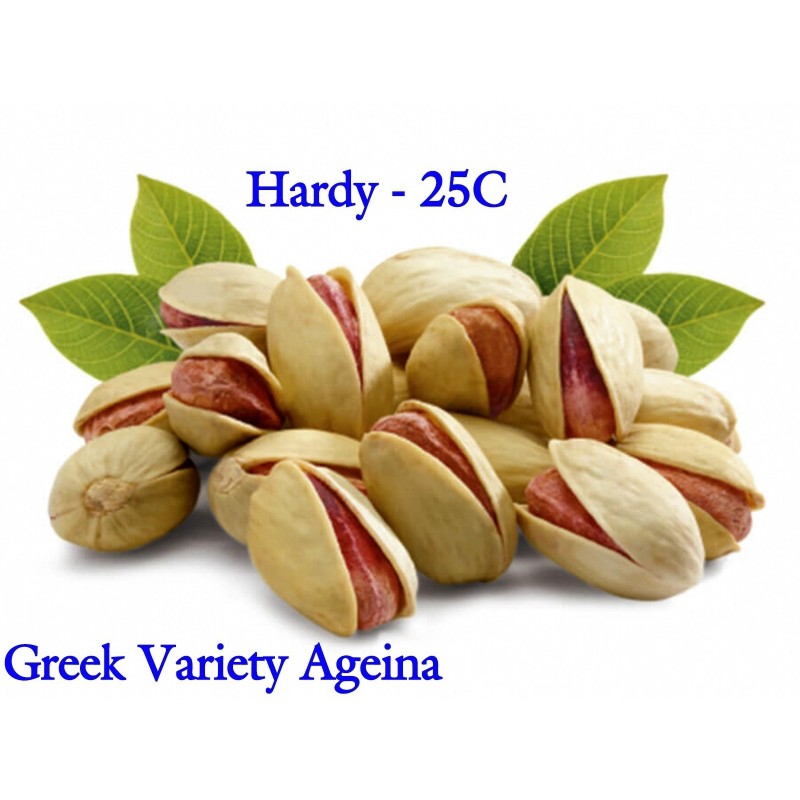 Best Pistachio in Greece is the Greek Variety "Aegina"!
There are many Pistacia species in Greece. Pistacia vera is the only nut for human consumption in Greece. Other Pistacia species such as Pistacia palaestina, P. terebinthus and P. lentiscus are used as ornamental shrubs. "Aegina" is the main edible cultivar in Greece.
The nut of the variety "Aegina" contains 55% fat, 23% proteins, and 14% carbohydrate. So it has a high nutritional value and lately, it has enjoyed increasing popularity. Also, the weight of one "Aegina" pistachio nut (dry) is averaged 0,97– 1,12 g. The moisture content of pistachio is around 7,5–9 % on the dry matter during storage conditions.

Compared to other pistachio varieties including California grown

The pistachio (/pɪˈstɑːʃiˌoʊ, -ˈstæ-/,[1] Pistacia vera), a member of the cashew family, is a small tree originating from Central Asia and the Middle East.[2] The tree produces seeds that are widely consumed as food.

Pistacia vera often is confused with other species in the genus Pistacia that are also known as pistachio. These other species can be distinguished by their geographic distributions (in the wild) and their seeds which are much smaller and have a soft shell.

Archaeology shows that pistachio seeds were a common food as early as 6750 BC.[3] Pliny the Elder writes in his Natural History that pistacia, "well known among us", was one of the trees unique to Syria, and that the seed was introduced into Italy by the Roman Proconsul in Syria, Lucius Vitellius the Elder (in office in 35 AD) and into Hispania at the same time by Flaccus Pompeius.[4] The early sixth-century manuscript De observatione ciborum ("On the observance of foods") by Anthimus implies that pistacia remained well known in Europe in Late Antiquity. Archaeologists have found evidence from excavations at Jarmo in northeastern Iraq for the consumption of Atlantic pistachio.[3] The Hanging Gardens of Babylon were said to have contained pistachio trees during the reign of King Merodach-Baladan about 700 BC.

The modern pistachio P. vera was first cultivated in Bronze Age Central Asia, where the earliest example is from Djarkutan, modern Uzbekistan.[5][6] It appears in Dioscurides as pistakia πιστάκια, recognizable as P. vera by its comparison to pine nuts.

Additionally, remains of the Atlantic pistachio and pistachio seed along with nut-cracking tools were discovered by archaeologists at the Gesher Benot Ya'aqov site in Israel's Hula Valley, dated to 780,000 years ago.[8] More recently, the pistachio has been cultivated commercially in many parts of the English-speaking world, in Australia, and in New Mexico[9] and California, of the United States, where it was introduced in 1854 as a garden tree.[10] David Fairchild of the United States Department of Agriculture introduced hardier cultivars collected in China to California in 1904 and 1905, but it was not promoted as a commercial crop until 1929.[9][11] Walter T. Swingle’s pistachios from Syria had already fruited well at Niles by 1917.

The earliest records of pistachio in English are around roughly year 1400, with the spellings "pistace" and "pistacia". The word pistachio comes from medieval Italian pistacchio, which is from classical Latin pistacium, which is from ancient Greek pistákion and pistákē, which is generally believed to be from Middle Persian, although unattested in Middle Persian. Later in Persian, the word is attested as pesteh. As mentioned, the tree came to the ancient Greeks from Western Asia.

Pistachio is a desert plant, and is highly tolerant of saline soil. It has been reported to grow well when irrigated with water having 3,000–4,000 ppm of soluble salts.[9] Pistachio trees are fairly hardy in the right conditions, and can survive temperatures ranging between −10 °C (14 °F) in winter and 48 °C (118 °F) in summer. They need a sunny position and well-drained soil. Pistachio trees do poorly in conditions of high humidity, and are susceptible to root rot in winter if they get too much water and the soil is not sufficiently free-draining. Long, hot summers are required for proper ripening of the fruit. They have been known to thrive in warm, moist environments.

The Jylgyndy Forest Reserve, a preserve protecting the native habitat of Pistacia vera groves, is located in the Nooken District of Jalal-Abad Province of Kyrgyzstan.

The bush grows up to 10 m (33 ft) tall. It has deciduous pinnate leaves 10–20 centimeters (4–8 inches) long. The plants are dioecious, with separate male and female trees. The flowers are apetalous and unisexual, and borne in panicles.

The fruit is a drupe, containing an elongated seed, which is the edible portion. The seed, commonly thought of as a nut, is a culinary nut, not a botanical nut. The fruit has a hard, creamish exterior shell. The seed has a mauvish skin and light green flesh, with a distinctive flavor. When the fruit ripens, the shell changes from green to an autumnal yellow/red, and abruptly splits part way open (see photo). This is known as dehiscence, and happens with an audible pop. The splitting open is a trait that has been selected by humans.[14] Commercial cultivars vary in how consistently they split open.

The shell of the pistachio is naturally a beige color, but it is sometimes dyed red or green in commercial pistachios. Originally, dye was applied by importers to hide stains on the shells caused when the seeds were picked by hand. Most pistachios are now picked by machine and the shells remain unstained, making dyeing unnecessary except to meet ingrained consumer expectations. Roasted pistachio seeds can be artificially turned red if they are marinated prior to roasting in a salt and strawberry marinade, or salt and citrus salts.

Like other members of the Anacardiaceae family (which includes poison ivy, sumac, mango, and cashew), pistachios contain urushiol, an irritant that can cause allergic reactions.

Iran, the United States and Turkey are the major producers of pistachios, together accounting for 83% of the world production in 2013 (table).

The trees are planted in orchards, and take approximately seven to ten years to reach significant production. Production is alternate-bearing or biennial-bearing, meaning the harvest is heavier in alternate years. Peak production is reached around 20 years. Trees are usually pruned to size to make the harvest easier. One male tree produces enough pollen for eight to 12 drupe-bearing females. Harvesting in the United States and in Greece is often accomplished using equipment to shake the drupes off the tree. After hulling and drying, pistachios are sorted according to open-mouth and closed-mouth shells. Sun-drying has been found to be the best method of drying,[18] then they are roasted or processed by special machines to produce pistachio kernels.

Pistachio trees are vulnerable to a wide variety of diseases. Among these is infection by the fungus Botryosphaeria, which causes panicle and shoot blight (symptoms include death of the flowers and young shoots), and can damage entire pistachio orchards.

In Greece, the cultivated type of pistachios has an almost-white shell, sweet taste, a red-green kernel and a closed-mouth shell relative to the 'Kerman' variety. Most of the production in Greece comes from the island of Aegina, the region of Thessaly-Almyros and the regional units of West Attica, Corinthia and Phthiotis.

In California, almost all female pistachio trees are the cultivar 'Kerman'. A scion from a mature female 'Kerman' is grafted onto a one-year-old rootstock.

Bulk container shipments of pistachio kernels are prone to self-heating and spontaneous combustion because of their high fat and low water contents.

China is the top pistachio consumer worldwide, with annual consumption of 80,000 tons, while the United States consumes 45,000 tons.

Pistachios are a nutritionally dense food. In a 100 gram serving, pistachios provide 562 calories and are a rich source (20% or more of the Daily Value or DV) of protein, dietary fiber, several dietary minerals and the B vitamins, thiamin and especially vitamin B6 at 131% DV (table).[28] Pistachios are a good source (10–19% DV) of calcium, riboflavin, vitamin B5, folate, vitamin E , and vitamin K (table).

In July 2003, the United States' Food and Drug Administration (FDA) approved the first qualified health claim specific to seeds lowering the risk of heart disease: "Scientific evidence suggests but does not prove that eating 1.5 ounces (42.5 g) per day of most nuts, such as pistachios, as part of a diet low in saturated fat and cholesterol may reduce the risk of heart disease".[31] Although pistachios contain many calories, epidemiologic studies have provided strong evidence that their consumption is not associated with weight gain or obesity.

A 2015 systematic review and meta-analysis of randomized controlled trials concluded that pistachio consumption in persons without diabetes mellitus appears to modestly lower systolic and diastolic blood pressure.[32] Several mechanisms for pistachios' antihypertensive properties have been proposed. These mechanisms include pistachios' high levels of the amino acid arginine (a precursor of the blood vessel dilating compound nitric oxide); high levels of phytosterols and monounsaturated fatty acids; and improvement of endothelial cell function through multiple mechanisms including reductions in circulating levels of oxidized low density lipoprotein cholesterol and pro-inflammatory chemical signals.

As with other tree seeds, aflatoxin is found in poorly harvested or processed pistachios. Aflatoxins are potent carcinogenic chemicals produced by molds such as Aspergillus flavus and Aspergillus parasiticus. The mold contamination may occur from soil, poor storage, and spread by pests. High levels of mold growth typically appear as gray to black filament-like growth. It is unsafe to eat mold-infected and aflatoxin-contaminated pistachios.[33] Aflatoxin contamination is a frequent risk, particularly in warmer and humid environments. Food contaminated with aflatoxins has been found as the cause of frequent outbreaks of acute illnesses in parts of the world. In some cases, such as Kenya, this has led to several deaths.

Pistachio shells typically split naturally prior to harvest, with a hull covering the intact seeds. The hull protects the kernel from invasion by molds and insects, but this hull protection can be damaged in the orchard by poor orchard management practices, by birds, or after harvest, which makes it much easier for pistachios to be exposed to contamination. Some pistachios undergo so-called "early split", wherein both the hull and the shell split. Damage or early splits can lead to aflatoxin contamination.[35] In some cases, a harvest may be treated to keep contamination below strict food safety thresholds; in other cases, an entire batch of pistachios must be destroyed because of aflatoxin contamination. In September 1997, the European Union placed its first ban on pistachio imports from Iran due to high levels of aflatoxin. The ban was lifted in December 1997 after Iran introduced and improved food safety inspections and product quality.

Pistachio shells may be helpful in cleaning up pollution created by mercury emissions.

Seeds did not germinate

I have received my package fine. Some time has passed since I've started the process to germinate the seeds. Unfortunately, none of them germinated so far. I have read various methods for pistachio seed germination, I had no success so far. Basically, all of them just ended up moldy and rotten. I have some seeds left and so I would appreciate some advice.

Hello Tunde, from your comment I can see that problem was only because of too much wet/water.

Anyone who understands will know that this was a problem with you.

The rule for all seeds is that the seeds must not be too wet, the seeds must be moist. Of course, your seed was moldy and rotted when it lay in the water for who knows how long ...

Humidity and temperature are most important for germination.

From our pictures, you can see the result of the germination of our pistachio seeds, when everything is done properly. So we are of the personal opinion that your comment should not be taken into account

Unfortunately you have not written more about your seed sowing and germination system :-(

Best Regards
Seeds Gallery Team
Was this review helpful to you? Yes No
 