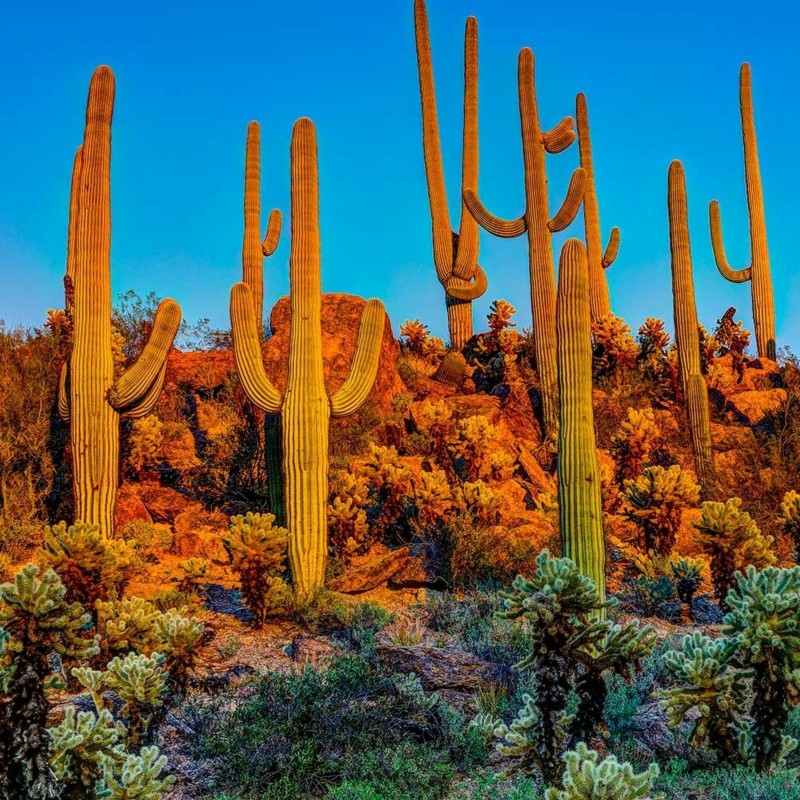 The saguaro (/səˈwɑroʊ/; scientific name Carnegiea gigantea) is a large, tree-sized cactus species in the monotypic genus Carnegiea, which can grow to be over 20 meters (~70 ft) tall. It is native to the

The saguaro (/səˈwɑroʊ/; scientific name Carnegiea gigantea) is a large, tree-sized cactus species in the monotypic genus Carnegiea, which can grow to be over 20 meters (~70 ft) tall. It is native to the Sonoran Desert in the U.S. state of Arizona, the Mexican state of Sonora, and the Whipple Mountains and Imperial County areas of California. The saguaro blossom is the State Wildflower of Arizona.
The common name saguaro came into the English language through the Spanish language, originating in the Mayo language.

Saguaros have a relatively long life span. They take up to 75 years to develop a side arm. A saguaro without arms is called a spear.

The arms are grown to increase the plant's reproductive capacity (more apices lead to more flowers and fruit). The growth rate of saguaros is strongly dependent on precipitation; saguaros in drier western Arizona grow only half as fast as those in and around Tucson, Arizona. Some specimens may live for more than 150 years;[1] the largest known saguaro is the Champion Saguaro. It grows in Maricopa County, Arizona, and is 13.8 meters (45.3 ft) tall with a girth of 3.1 meters (10 ft). These cacti can grow anywhere from 40 to 60 feet. They grow slowly from seed, and never from cuttings. Whenever it rains, saguaros soak up the rainwater. The cactus will visibly expand, holding in the rainwater. It conserves the water and slowly consumes it.

The spines on saguaro having a height less than 2 metres grow rapidly, up to a millimeter per day. When held up to the light or bisected, alternating light and dark bands transverse to the long axis of spines can be seen. These transverse bands have been correlated to daily growth. In columnar cacti, spines almost always grow in aureoles which originate at the apex of the plant. Individual spine growth reaches mature size in the first season and then cease to grow. Areoles are moved to the side and the apex continues to grow upwards. Thus, the older spines are towards the base of a columnar cactus and newer spines are near the apex. Current studies are underway to examine the relationship of carbon and oxygen isotope ratios in the tissues of spines to the past climate and photosynthetic history of the plant (acanthochronology).

The night blooming white and yellow flowers appear April through June and the sweet, ruby-colored fruit matures by late June. Saguaro flowers are self incompatible thus require cross pollination. Large quantities of pollen are required for complete pollination as there are numerous ovules. A well pollinated fruit will contain several thousand tiny seeds.

The major pollinators are bats, primarily the lesser long-nosed bat, feeding on the nectar from the night-blooming flowers, which often remain open in the morning. There are a number of floral characteristics geared toward bat pollination: nocturnal opening of the flowers, nocturnal maturation of pollen, very rich nectar, position high above the ground, durable blooms that can withstand a bat's weight, and fragrance emitted at night. One additional piece of evidence is that the amino acids in the pollen appear to help sustain lactation in bats. The flowers remain open into the daylight hours and continue to produce nectar after sunrise. Doves and bees appear to be the primary daytime pollinators.

The ruby red fruits are six to nine centimeters long and ripen in June. Each fruit contains around 2000 seeds plus sweet fleshy connective tissue. The fruits are edible and prized by local people.

The fruits cannot be picked by hand, but must be harvested using a pole 2 to 5 meters long, to the end of which is attached another pole.

The O'odham tribes have a long history of saguaro fruit use.[3] The Tohono O’odham tribes celebrate the beginning of their summer growing season with a ceremony using a fermented drink made from the bright red fruit to summon rains, vital for the crops.

Native birds such as Gila woodpeckers, purple martins, house finches, and gilded flickers live inside holes in saguaros. Flickers excavate larger holes higher on the stem.[4] The nest cavity is deep, the parents and young entirely hidden from view. The saguaro creates callus tissue on the wound. When the saguaro dies and its soft flesh rots, the callus remains behind as a so-called "saguaro boot," which was used by natives for storage.

The Gila woodpeckers (Melanerpes uropygialis) create new nest holes each season rather than reuse the old ones, leaving convenient nest holes for other animals, such as elf owls, flycatchers, and wrens.[5] In recent years, early-breeding, aggressive, non-native birds have taken over the nests to the detriment of elf owls who breed and nest later.

Harming a saguaro in any manner, including cactus plugging, is illegal by state law in Arizona, and when houses or highways are built, special permits must be obtained to move or destroy any saguaro affected.

The saguaro is an important source of food and shelter for the Tohono O’odham. Saguaro spines are sometimes used as sewing needles and the ribs are used to make harvesting tools.

The ribs of the saguaro were used for construction and other purposes by Native Americans. A fine example can be seen in the roofing of the cloisters of the Mission San Xavier del Bac on the Tohono O'odham lands near Tucson, Arizona.

The Seri people of northwestern Mexico used the plant which they call mojépe for a number of purposes.

The saguaro is often used as an emblem in commercials and logos that attempt to convey a sense of the Southwest, even if the product has no connection to Arizona or the Sonoran Desert. For instance, no saguaros are found within 250 miles (400 km) of El Paso, Texas, but the silhouette is found on the label of Old El Paso brand products. Though the geographic anomaly has lessened in recent years, Western films once enthusiastically placed saguaros in Monument Valley of Arizona as well as New Mexico, Utah, and Texas. There are no wild saguaros anywhere in the western U.S. states of Texas, Colorado, Utah, New Mexico, or Nevada, nor in the high deserts of northern Arizona.