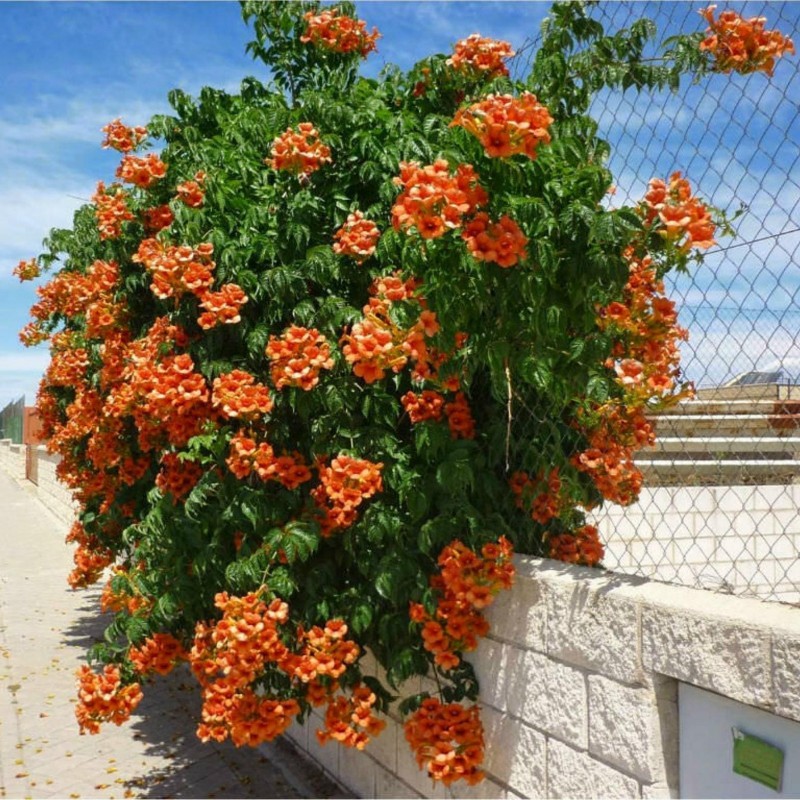 Campsis radicans (trumpet vine or trumpet creeper, also known in North America as cow itch vine[citation needed] or hummingbird vine[citation needed]), is a species of flowering plant of the family Bignoniaceae, native to the eastern United States and naturalized in parts of the western United States as well as in Ontario, parts of Europe, and scattered locations in Latin America. Growing to 10 m (33 ft), it is a vigorous, deciduous woody vine, notable for its showy trumpet-shaped flowers. It inhabits woodlands and riverbanks, and is also a popular garden subject.

The leaves are opposite, ovate, pinnate, 3–10 cm long, and emerald green when new, maturing into a dark green. The flowers come in terminal cymes of 4–12, orange to red in color with a yellowish throat, and generally appear after several months of warm weather.

The flowers are very attractive to hummingbirds, and many types of birds like to nest in the dense foliage. The flowers are followed by large seed pods. As these mature, they dry and split. Hundreds of thin, brown, paper-like seeds are released. These are easily grown when stratified.

The flamboyant flowering of Campsis radicans made it obvious to even the least botanically-minded of the first English colonists in Virginia. Consequently the plant quickly made its way to England early in the 17th century. Its botanical parentage, as a hardy member of a mostly subtropical group, made its naming problematic: according to John Parkinson, the Virginia settlers were at first calling it a jasmine or a honeysuckle, and then a bellflower; he classed it in the genus Apocynum (dogbane). Joseph Pitton de Tournefort erected a catch-all genus Bignonia in 1700, from which it has since been extricated.

The vigor of the trumpet vine should not be underestimated. In warm weather, it puts out huge numbers of tendrils that grab onto every available surface, and eventually expand into heavy woody stems several centimeters in diameter. It grows well on arbors, fences, telephone poles, and trees, although it may dismember them in the process. Ruthless pruning is recommended. Outside of its native range this species has the potential to be highly invasive, even as far north as New England. The trumpet vine thrives in many places in southern Canada as well.

Away from summer heat, C. radicans is less profuse of flower. A larger-flowered hybrid 'Mme Galen' was introduced about 1889 by the Tagliabue nurserymen of Laniate near Milan.