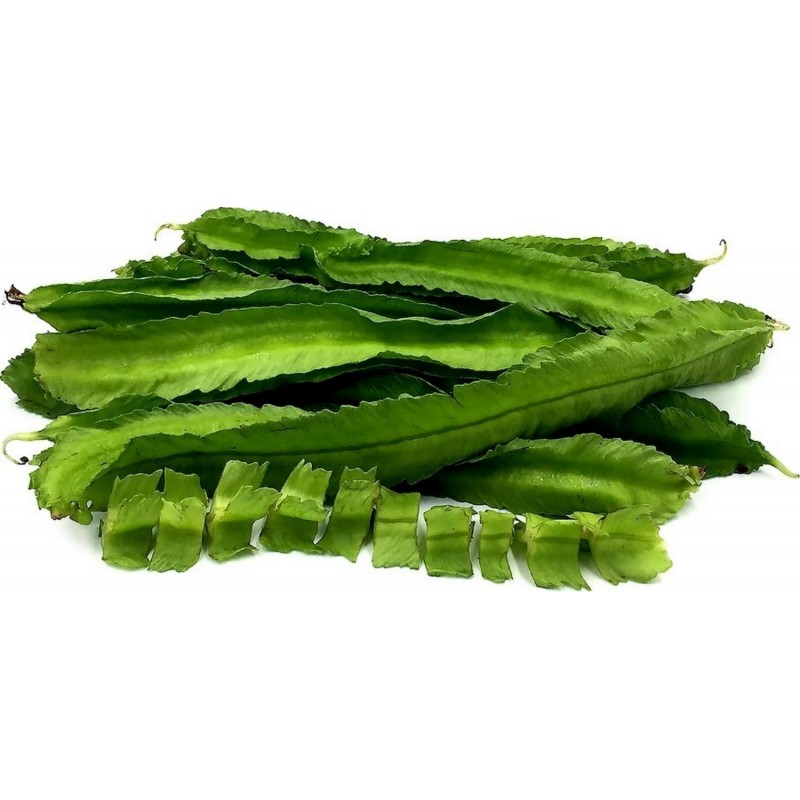 The winged bean (Psophocarpus tetragonolobus), also known as the Goa bean, asparagus pea, four-angled bean, four-cornered bean, Manila bean, Mauritius bean, and winged pea, is a tropical legume plant native to New Guinea. It grows abundantly in hot, humid equatorial countries, from the Philippines and Indonesia to India, Burma, Thailand and Sri Lanka. It is widely known, yet grown on a small scale in Southeast Asia and Papua New Guinea. Winged bean is well-recognized by farmers and consumers in the Asian region for its variety of uses and disease tolerance. Winged bean is nutrient-rich, and all parts of the plant are edible. Leaves can be eaten like spinach, flowers can be used in salads, tubers can be eaten raw or cooked, seeds can be used in similar ways as the soybean. The winged bean is an underutilized species but has the potential to become a major multi-use food crop in the tropics of Asia, Africa and Latin America.

The winged bean plant grows as a vine with climbing stems and leaves, 3–4 m in height. It is an herbaceous perennial, but can be grown as an annual. It is generally taller and notably larger than the Common bean. The bean pod is typically 15–22 cm (6–9 in) long and has four wings with frilly edges running lengthwise. The skin is waxy and the flesh partially translucent in the young pods. When the pod is fully ripe, it turns an ash-brown color and splits open to release the seeds. The large flower is a pale blue. The beans themselves are similar to soybeans in both use and nutritional content (being 29.8% to 39% protein).

There is abundant variation in the appearance of winged bean. The shape of its leaves ranges from ovate, deltoid, ovate-lanceolate, lanceolate and long lanceolate. The leaves of winged bean also vary in colour appearing as different shades of green.

Stem colour is commonly green, but can vary from shades of green to shades of purple.

Pod shape is most commonly rectangular, but can also appear flat. Pod colour may also vary from shades of cream, green, pink or purple. The exterior surface of the pod also varies in texture. Pods can appear smooth or rough depending on genotype. Seed shape is often round, but oval and rectangular seeds are also found. Seed colour changes based on environmental factors and storage conditions. Seeds may appear white, cream, brown or dark tan in appearance. The shape of winged bean tuberous roots also show variation.

One of the advantages of the winged bean is its ability to produce food from many different parts of the plant.

Pods- Can be eaten unripe as a crunchy vegetable, cooked or raw

Seeds- Require cooking for 2–3 hours to destroy trypsin inhibitors and hemagglutinins that inhibit digestion.[4] Seeds can be roasted like peanuts and have nutrient value comparative to soy beans. Average about 35% protein and 17% oil.

Roots-Can be eaten raw or cooked. Tubers are high in protein and nutrient rich. Tuberous roots have 20% protein, which is much higher than other edible roots.

Leaves and Flowers- Can be eaten raw or cooked. Flowers and leaves also have a high protein content at 10-15%.

Winged bean is a self-pollinating plant but mutations and occasional outcrossing, may produce variations in the species. The pretreatment of winged bean seeds is not required in tropical climate, but scarification of seeds has shown to enhance the germination rate of seedlings. Seed soaking may also increase speed to germination, as is typical, and may be used in conjunction with scarification. Seedlings under natural field conditions have been reported to emerge between 5–7 days.

It is recorded that winged bean can grow as fast or faster than comparative legume plants including soybeans. There is a 40-140 day period of germination from sowing to flowering of the winged bean plant. The pod reaches its full length and can be gathered to use as a vegetable 2 weeks after pollination. Three weeks after pollination, the pod becomes fibrous and after six weeks mature seeds can be harvested. Tuber development and flower production are dependent upon genotype and environmental factors. Some varieties of winged bean do not produce tuberous roots. The winged bean is a tropical plant, and will only flower when the day length is shorter than 12 hours, though some varieties have been reported as day-length neutral. All varieties of winged bean grow on a vine and must grow over a support. Some examples of support systems include: growing against exterior walls of houses, huts, buildings; supporting against larger perennial trees; stakes placed in the ground vertically; and structures made from posts and wires.

Because the early growth of winged bean is slow, it is important to maintain weeds. Slow early growth makes winged bean susceptible to weed competition in the first 4–6 weeks of development. Khan (1982) recommends weeding by hand or animal drawn tractor two times before the support system of the winged bean is established.

Winged bean can be grown without added fertilizer as the plant has a bacterium on the nodules of the roots that fixes nitrogen and allows the plant to absorb nitrogen. Factors that influence nitrogen fixation include, Rhizobium strain, interactions between strain and host genotype, available nutrients and soil pH.

Moderate variations in the growing climate of winged bean can result in variations in yield. It is reported than growing winged bean in lower than favourable temperatures can increase tuber production. It is also reported that leaf expansion rate is higher in a warmer climate. In addition to adequate temperature, winged bean requires sufficient soil moisture at all stages of growth to produce high yields. Although the winged bean plant is indigenous to the humid tropics, it is possible for the plant to succeed in drier climate with plenty of irrigation. Success has been noted when the maturity of the plant and the drier part of the growing season correspond.

The hot, humid, and relatively wet summers of the Mid-Atlantic/Northeast are sufficient to raise the plant to crop, though the shorter growing season and day-length flowering issues will restrict the timing and amounts of yields.

This bean has been called the "one species supermarket" because practically all of the plant is edible. The beans are used as a vegetable, but the other parts (leaves, flowers, and tuberous roots) are also edible. The tender pods, which are the most widely eaten part of the plant (and best eaten when under 1" in length), can be harvested within two to three months of planting. The flowers are often used to color rice and pastries. The flavor of the beans has a similarity to asparagus. The young leaves can be picked and prepared as a leaf vegetable, similar to spinach. The roots can be used as a root vegetable, similar to the potato, and have a nutty flavor; they are also much richer in protein than potatoes. The dried seeds can be useful as a flour and also to make a coffee-like drink. Each of these parts of the winged bean provide a source of vitamin A, vitamin C, calcium, iron, and other vitamins. The seeds contain 35% protein and 18% oil.

The winged bean is rich in protein and tocopherol, an antioxidant that increases vitamin A use in the body (National Research Council (U.S), 1975). Its ability to grow in heavy rainfall makes the species a good candidate to adequately nourish the people of tropical equatorial countries in Africa. The wing bean can also be used to produce winged bean milk made from water, winged beans, and emulsifier. Winged bean milk has similar characteristics as soymilk without the same bean-rich flavour. Winged bean has also been reported as an effective remedy for smallpox and as a cure for vertigo in Malaya.

The winged bean also provides many opportunities for economic benefit. Many parts of the winged bean can be sold. Mature seeds can bring in a high price . There is evidence of smoked pods, uncooked tubers, cooked tubers, dry seeds, and leaves being sold in domestic markets in South East and South Asia. Winged bean also has the potential to be used as animal feed for livestock and poultry. The winged bean also has the potential to be used as a replacement for fish meal used to raise African catfish (Clarias gariepinus), a highly valued food fish in Africa. Feeding fish represents a large portion of operating cost for fish farmers and fishmeal is scarce and high-priced. Winged bean can be used as the primary protein source for fish feed to reduce farmer dependence on fish meal availability.