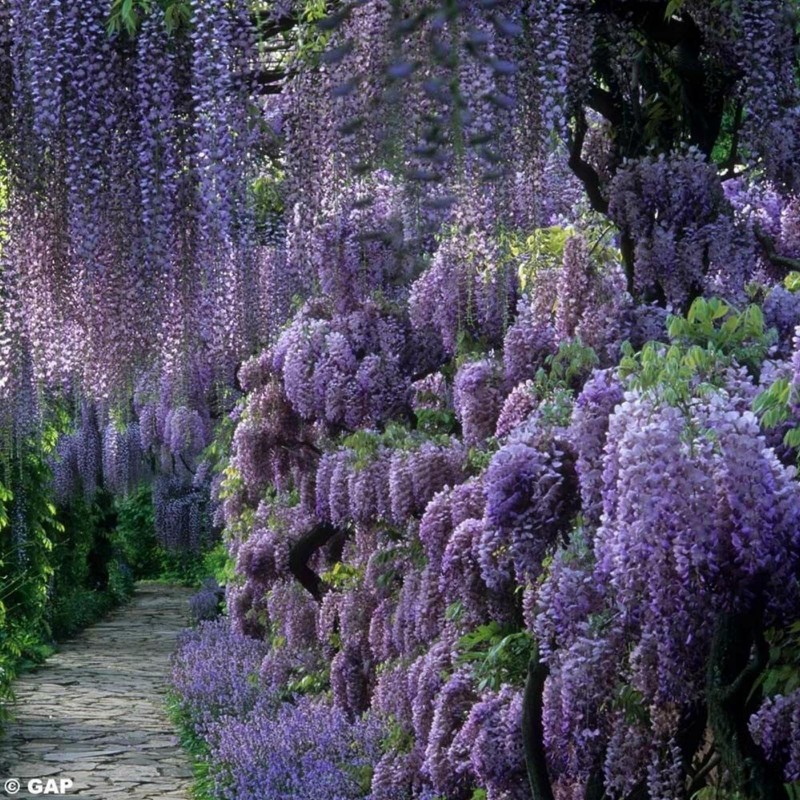 Wisteria (also spelled Wistaria or Wysteria) is a genus of flowering plants in the pea family, Fabaceae, that includes ten species of woody climbing vines native to the Eastern United States and to China

Wisteria (also spelled Wistaria or Wysteria) is a genus of flowering plants in the pea family, Fabaceae, that includes ten species of woody climbing vines native to the Eastern United States and to China, Korea, and Japan. Some species are popular ornamental plants, especially in China and Japan. An aquatic flowering plant with the common name wisteria or 'water wisteria' is in fact Hygrophila difformis, in the family Acanthaceae.

Wisteria vines climb by twining their stems either clockwise or counterclockwise round any available support. They can climb as high as 20 m above the ground and spread out 10 m laterally. The world's largest known Wisteria vine is in Sierra Madre, California, measuring more than 1 acre (0.40 ha) in size and weighing 250 tons. Planted in 1894, it is of the Chinese lavender variety.

The leaves are alternate, 15 to 35 cm long, pinnate, with 9 to 19 leaflets. The flowers are produced in pendulous racemes 10 to 80 cm long, similar to those of the genus Laburnum, but are purple, violet, pink or white. There is no yellow on the leaves. Flowering is in the spring (just before or as the leaves open) in some Asian species, and in mid to late summer in the American species and W. japonica. The flowers of some species are fragrant, most notably Chinese Wisteria. The seeds are produced in pods similar to those of Laburnum, and, like the seeds of that genus, are poisonous.

Wisteria is an extremely hardy plant that is considered an invasive species in many parts of the U.S., especially the Southeast, due to its ability to overtake and choke out other native plant species.

Wisteria species are used as food plants by the larvae of some Lepidoptera species including brown-tail.

Wisteria, especially Wisteria sinensis, is very hardy and fast-growing. It can grow in fairly poor-quality soils, but prefers fertile, moist, well-drained soil. They thrive in full sun. Wisteria can be propagated via hardwood cutting, softwood cuttings, or seed. However, specimens grown from seed can take decades to bloom; for this reason, gardeners usually grow plants that have been started from rooted cuttings or grafted cultivars known to flower well.[citation needed] Another reason for failure to bloom can be excessive fertilizer (particularly nitrogen). Wisteria has nitrogen fixing capability (provided by Rhizobia bacteria in root nodules), and thus mature plants may benefit from added potassium and phosphate, but not nitrogen. Finally, wisteria can be reluctant to bloom because it has not reached maturity. Maturation may require only a few years, as in Kentucky Wisteria, or nearly twenty, as in Chinese Wisteria. Maturation can be forced by physically abusing the main trunk, root pruning, or drought stress.

Wisteria can grow into a mound when unsupported, but is at its best when allowed to clamber up a tree, pergola, wall, or other supporting structure. Whatever the case, the support must be very sturdy, because mature Wisteria can become immensely strong with heavy wrist-thick trunks and stems. These will certainly rend latticework, crush thin wooden posts, and can even strangle large trees. Wisteria allowed to grow on houses can cause damage to gutters, downspouts, and similar structures. Its pendulous racemes are best viewed from below.

Wisteria flowers develop in buds near the base of the previous year's growth, so pruning back side shoots to the basal few buds in early spring can enhance the visibility of the flowers. If it is desired to control the size of the plant, the side shoots can be shortened to between 20 and 40 cm long in mid summer, and back to 10 to 20 cm in the fall. Once the plant is a few years old, a relatively compact, free-flowering form can be achieved by pruning off the new tendrils three times during the growing season; in June, July and August, for the northern hemisphere. The flowers of some varieties are edible, and can even be used to make wine. Others are said to be toxic. Careful identification by an expert is strongly recommended before consuming this or any wild plant.

The botanist Thomas Nuttall said he named the genus Wisteria in memory of Dr. Caspar Wistar (1761–1818).[1][2] Questioned about the spelling later, Nuttall said it was for "euphony," but his biographer speculated that it may have something to do with Nuttall's friend Charles Jones Wister, Sr., of Grumblethorpe, the grandson of the merchant John Wister.[3] (Some Philadelphia sources state that the plant is named after Wister.)[4] As the spelling is apparently deliberate, there is no justification for changing the genus name under the International Code of Botanical Nomenclature.[5] However, some spell the plant's common name "wistaria", and Fowler is decisively for the "wistaria" spelling.

Genetic analysis shows Callerya, Afgekia and Wisteria to be each other's closest relatives and quite distinct from other members of the tribe Millettieae. Both have eight chromosomes.

Fuji Musumè (藤娘?) or Wisteria Maiden is an Otsu-e (Japanese folk painting in Ōtsu, Shiga) subject thought to have been inspired by popular dances. These paintings were often sold as good-luck charms for marriages. Fuji Musumè is also a famous classical Kabuki dance.

In Barbara Kingsolver's novel The Bean Trees, Turtle refers to wisteria vines as bean trees, because the pre-bloomed flower pods are shaped like beans. Later, she and Taylor learn that wisteria is a legume (i.e., is in the bean family) and that wisteria and other legumes engage in symbiotic relationships, just as the book's characters do.

In Charlotte Perkins Gilman's "The Giant Wistaria," the plant becomes both a sign of virility ("'It groweth well, this vine thou broughtest me in the ship, my husband.'") as well as a sign of destruction. A daughter has a child out of wedlock and her parents plan to take her back to the old country while giving the baby to a local town. The daughter hears this and ultimately, drowns the baby. She either hangs herself from the wistaria vines roots growing in the basement or they strangle her and kill her; the story doesn't clarify.