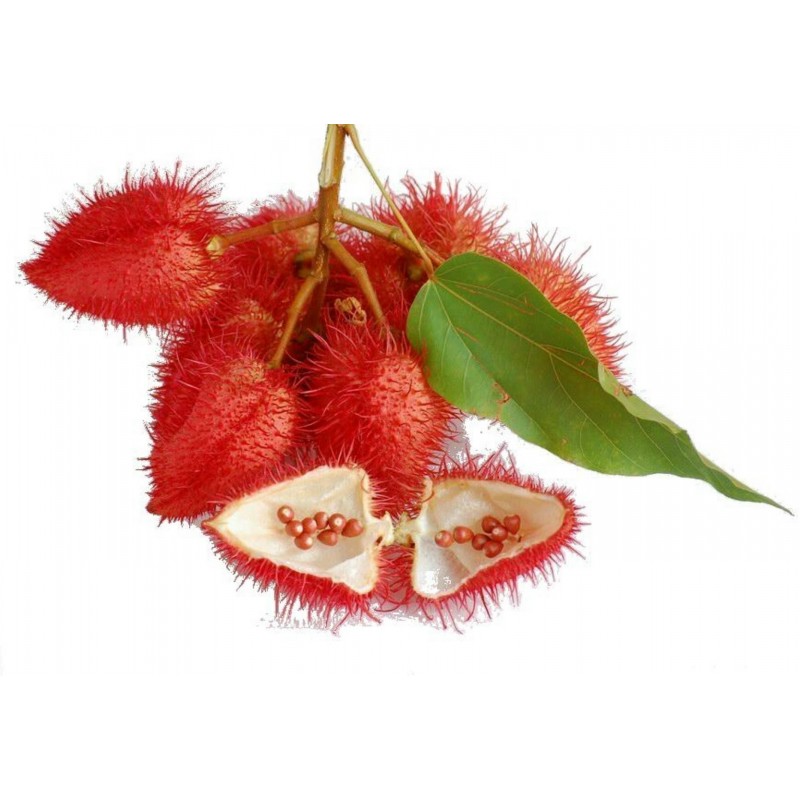 This lovely tropical and sub-tropical shrub or bushy tree has glossy, ovate, evergreen leaves on twigs which are covered with rust-coloured scales when young and are bare when older. Sprays of attractive pink and white flowers open, producing striking, bright red, two-valved fruits, covered with dense soft bristles. When ripe, they split open revealing masses of small, inedible, fleshy seeds, covered with red-orange pulp. The inedible fruit is harvested for its seeds which produce the reddish orange dye annatto, which is one of the most important food grade natural colourants widely used in the dairy industry, and also for confectionery and bakery products, as well as non-edible purposes such as cosmetics and dying leather.

Sowing advice: These seeds have already been thoroughly cleaned and should be sown into a well-drained, sandy compost at any time of the year, and covered thinly with sand or grit and kept moist. Keep at between 20-25 degrees C. Seeds sometimes germinate within 4 to 6 weeks although some varieties may take very much longer so please be patient. Plant out in the open ground in warmer countries or in a large container elsewhere.

An investigation on germination of annatto (Bixa orellana L.) was conducted. Water uptake studies showed that seeds were fully imbibed after 24 h. Soaking in water for 24 h enhanced germination (82%) compared to the untreated control (57%). Germination was improved to 93% and was coupled with a significant (p < 0.001) reduction in mean time to germination (MTG, 3.64 d) by soaking seeds in a 50 ppm gibberellic acid (GA3) solution for 24 h. Germination capacity for medium (97%) weight class seeds was higher than light (40%) or heavy seeds (60%). Significant (p < 0.001) germination variability was recorded among eight seed collections. Seeds collected from populations in Kariavattom (82%) and Kulathupuzha (80%) produced significantly higher germination coupled with a low mean time to germination.

Achiote (Bixa orellana) is a shrub or small tree originating from the tropical region of the Americas. North, Central and South American natives originally used the seeds to make red body paint and lipstick. For this reason, the achiote is sometimes called the lipstick tree.

The tree is best known as the source of annatto, a natural orange-red condiment (also called "achiote" or "bijol") obtained from the waxy arils that cover its seeds. The ground seeds are widely used in traditional dishes in South and Central America, the Caribbean, and Mexico; such as cochinita pibil, chicken in achiote and caldo de olla. Annatto and its extracts are also used as an industrial food coloring to add yellow or orange color to many products such as butter, cheese, sausages, cakes, and popcorn.

The species name was given by Linnaeus after the Spanish conquistador Francisco de Orellana, an early explorer of the Amazon River.[2] The name achiote derives from the Nahuatl word for the shrub, āchiotl [aːˈt͡ʃiot͡ɬ]. It may also be referred to as aploppas, or by its original Tupi name uruku, urucu or urucum ("red color"), which is also used for the body paint prepared from its seeds.

Ground B. orellana seeds are often mixed with other seeds or spices to form a paste or powder for culinary use especially in Latin American, Jamaican, Chamorro, and Filipino cuisines. The seeds are heated in oil or lard to extract its dye and flavor for use in dishes and processed foods such as cheese, butter, soup, gravy, sauces, cured meats, and other items. The seeds impart a subtle flavor and aroma and a yellow to reddish-orange color to food. The seeds are used to color and flavor rice instead of the much more expensive saffron.

In Brazil, a powder known as colorau or colorífico is made from the ground seeds combined with filler seeds like maize. This powder is similar to and sometimes replaces paprika.[6]

The Yucatecan condiment called recado rojo or "achiote paste" is made from ground seeds combined with other spices. It is a mainstay of the Mexican and Belizean cuisines.

A condiment called sazón ("seasoning" in Spanish) is commonly used in Puerto Rican cuisine for meats and fish. Sazón is made from achiote seeds, cumin, coriander seeds, salt, and garlic powder.

The tree was incorporated into the traditional medicine of India, where different parts of the plant are used to treat various disorders,[7] although no treatment has been verified by clinical research.

Achiote has long been used by American Indians to make a bright red paint for the body and hair. Body-painting with urucu remains an important tradition of many Brazilian native tribes. It was reportedly used for body paint among the native Taínos in Borinquen, Puerto Rico. The use of achiote hair dye by men of the Tsáchila of Ecuador is the origin of their Spanish name, the Colorados.

The Aztec people of Mexico used achiote seeds as source of a red ink for manuscript painting in the 16th century.

The plant is also valued for its stem fibre (used in rope mats) and an adhesive gum which is extracted from all parts.

Bixa orellana is a tall shrub to small evergreen tree 6–10 m (20–33 ft) high. It bears clusters of 5 cm (2 in) bright white to pink flowers, resembling single wild roses, appearing at the tips of the branches. The fruits are in clusters: spiky looking red-brown seed pods covered in soft spines. Each pod contains many seeds covered with a thin waxy blood-red aril. When fully mature, the pod dries, hardens, and splits open, exposing the seeds.

The color of the seed coating is due mainly to the carotenoid pigments bixin and norbixin.

Bixa orellana originated in South America but it has spread to many parts of the world. It is grown easily and quickly in frost-free regions, from sub-tropical to tropical climates, and sheltered from cool winds. It prefers year-round moisture, good drainage, and moderately fertile soil in full sun or partial shade. It can be propagated from seed and cuttings. Cutting-grown plants flower at a younger age than seedlings.

The main commercial producers are countries in South America, Central America, the Caribbean, Africa, and also India and Sri Lanka, where it was introduced by the Spanish in the 17th century. Production statistics are not usually available, and would not provide a reliable guide to international trade since many of the producing countries use significant quantities domestically (e.g. Brazil is a large producer and consumer, needing additional imports). Annual world production of dried annatto seed at the beginning of the 21st century was estimated at about 10,000 tons, of which 7,000 tons enter international trade. Peru is the largest exporter of annatto seed, annually about 4,000 tons; Brazil the largest producer with about 5,000 tons. Kenya exports annually about 1,500 tons annatto seed and extracts and is the second-largest exporter, after Peru. Côte d'Ivoire and Angola are also exporters.

Before synthetic dyes revolutionized industry, the tree was planted commercially for the pigment, extracted by solvent or boiling the seeds in oil, which was used to color cheese, margarine, chocolate, fabric and paints. Annatto oil is rich in tocotrienols, beta-carotene, essential oil, saturated and unsaturated fatty acids, flavonoids and vitamin C.[5] The seeds are collected from wild-growing bushes or from plantations in Latin America, Africa, and Asia.