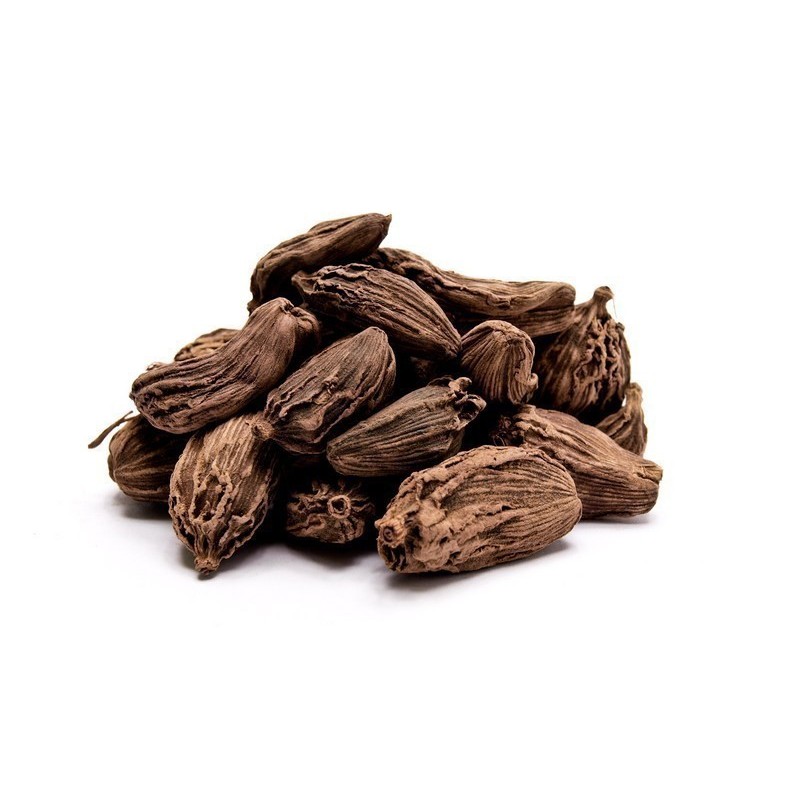 Black cardamom spice - whole
The price is for packaging of 10 grams of this spice.

Black cardamom spice - whole
The price is for packaging of 10 grams of this spice.

Black cardamom, also known as hill cardamom, Bengal cardamom, greater cardamom, Indian cardamom, Nepal cardamom, winged cardamom, or brown cardamom, comes from either of two species in the family Zingiberaceae. Its seed pods have a strong, camphor-like flavor, with a smoky character derived from the method of drying.The pods are used as a spice, in a similar manner to the green Indian cardamom pods, but with a different flavor. Unlike green cardamom, this spice is rarely used in sweet dishes. Its smoky flavor and aroma derive from traditional methods of drying over open flames.

Black cardamom is used for hearty meat stews and similar dishes. Although the flavor differs from the smaller green cardamom, black cardamom is sometimes used by large-scale commercial bakers because of its low cost.

Black cardamom is often erroneously described as an inferior substitute for green cardamom by those unfamiliar with the spice. It is just not as well suited for the sweet/hot dishes that typically include cardamom and that are more commonly prepared outside the plant's native range.

In China, the pods are used for jin-jin braised meat dishes, particularly in the cuisine of the central-western province of Sichuan. The pods are often used in Vietnam, where they are called thảo quả and used as an ingredient in the broth for the noodle soup called phở.

Many of our clients ask us how to know which plants are F (hybrid) or GMO and which are not.

You will recognize that they are always marked with an F1

in the product description