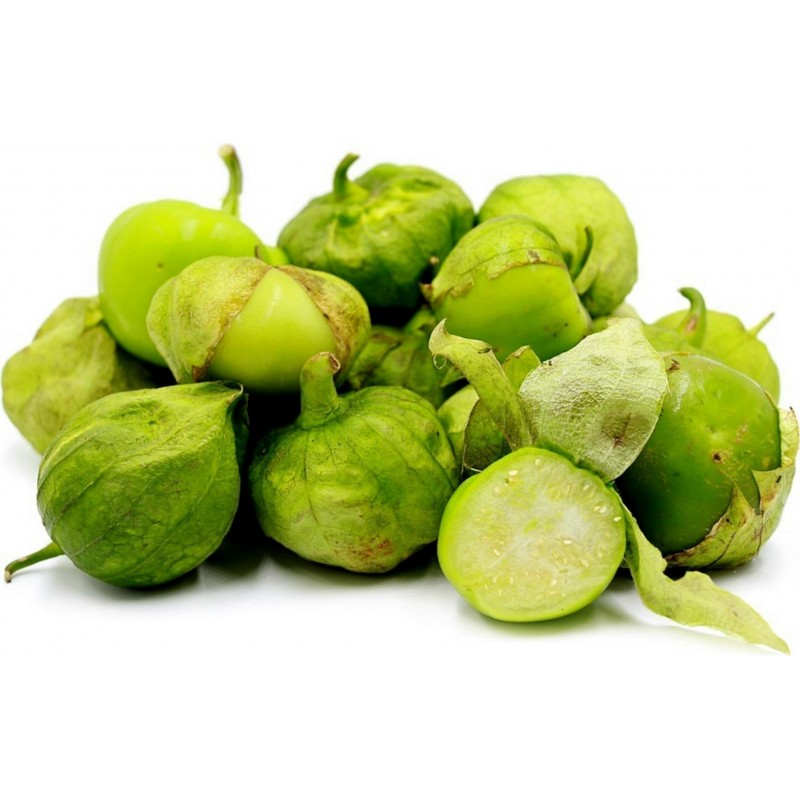 One of the most popular and reliable tomatillo varieties delivering heavy crops on large determinate vines of rounded berries 1 to 2 inches in diameter enclosed in the thin husk of its extended calyx.  The fruit ripens to a

Tomatillos are irreplaceable as a vegetable and part of salas, especially in Mexican cuisine, and cannot be replaced with green tomatoes. Tomatillos has the ability to thicken the sauce and soup, so other thickeners can be omitted.

The original distribution area of Tomatillo is Mexico. Therefore, vegetables are also called Mexican tomatoes or Mexican cherries. Tomatillo is a herbaceous and shrubby growing perennial plant with serrated leaves that can reach one to two meters in height.

Unlike other Phisalis species, Tomatillo is barely hairy. Its yellow flowers are dark brown to black in the middle. The champion-shaped bracts are green and purple at first and dry. Spherical fruits are like tomatoes, which are green, yellow or purple, depending on the variety. They have a sweet-sour aroma and are used for seasoning sauces, especially in Mexico and Central America. In addition, Tomatilo is mainly grown in the southern United States. Tomatillo is still relatively unknown. However, this could change quickly due to the relatively uncomplicated cultivation and their high yields.

As Tomatillo belongs to the plants of the tomato family, it forms its fruits best in a sheltered from the wind and in a sunny place, in loose and nutrient-rich soil. Areas with a winegrowing climate are particularly suitable for cultivation. Before planting, it proved useful to improve the soil with little compost.

Tomatillos can be sown from mid-February to the end of March. The seeds are grown in seed pods on a window or in a greenhouse. To do this, sow the seeds in small pots with sowing soil and place them as light and warm as possible, ideally a germination temperature of 20 to 27 degrees Celsius. Keep seedlings that appear after about a week or two moistened with warm water. If the seedlings are large enough to touch, they are transferred to pots five to eight inches in size. Cure young plants in a warm and sunny place for about four to five weeks before planting them outside.

Unlike Andean berries, tomatillos depend not only on insect pollination but also on cross-pollinators, so at least two plants are required to harvest. Planting should be done in late May, when there is no more frost. Sow the plants very low, as the stems in contact with the soil will develop more roots. Keep the distance from plant to plant 80 x 80 centimeters, as plants grow abundantly. Regularly water the tomatillos and fertilize them every two weeks with a plant-based fertilizer, such as horse or other.

The first tomatillos are ready to harvest after about 70 days. The fruits grow so large that they split the protective membrane. Then they mature and fall to the ground. In some varieties, ripe fruits turn purple or golden yellow under the influence of light. The fruit is delicious sour-sweet, depending on the variety. The fruits can be eaten raw, but are mostly processed into salsa, sauces, sauces and soups. In their home country, Mexico, they are known as the main ingredient of "Salsa verde". But they can also be used in vegetable dishes. The fruits can be refrigerated for several days to several weeks.

You can grow Tomatillo for several years if you are wintering the plant indoors. However, since it is very sensitive to cold, it has only been grown for a year. If stored in a large flower pots, you should cut it two-thirds after harvest and hibernate in a bright place with a temperature of about ten degrees Fahrenheit. From March, you should gradually get used to the higher temperatures and sunshine before setting it outdoors.