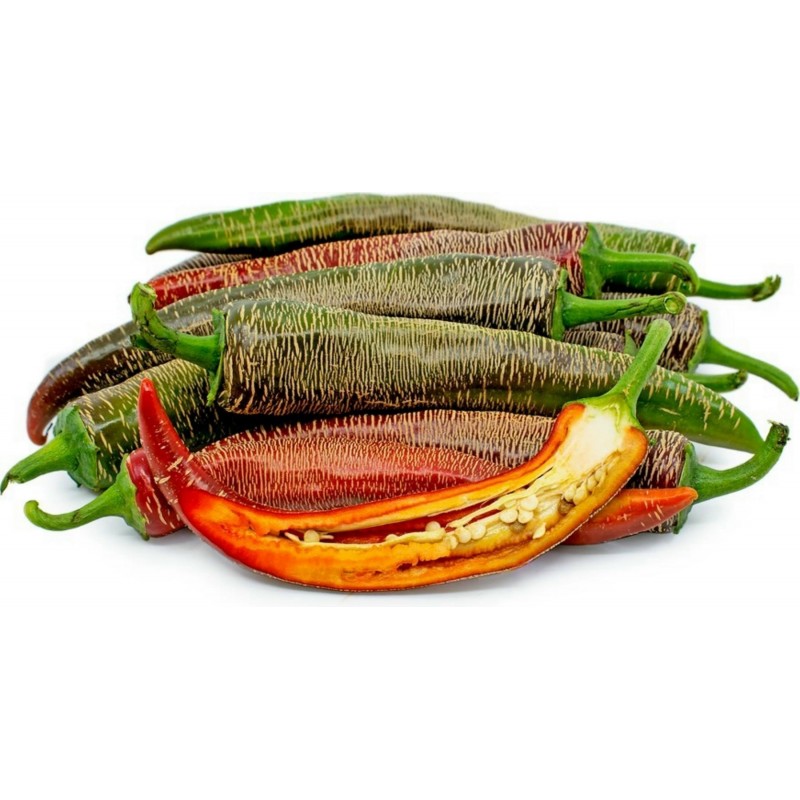 Vezanka, Vezena peppers are medium to large in size and are long, slender, and taper to a point at the non-stem end, averaging one centimeter in diameter near the stem

Vezanka, Vezena peppers are medium to large in size and are long, slender, and taper to a point at the non-stem end, averaging one centimeter in diameter near the stem cap and 15-30 centimeters in length. The pods have prominent, horizontal tan lines, also known as corking, and these lines create a leathery texture. The skin matures from green to red and is very thin, moist, and slightly chewy. Inside the pod, there is a hollow seed cavity housing many round, pale white to cream-colored seeds that are slippery, firm, and crunchy. Vezena peppers have a mild to medium heat, are very aromatic, and are initially sweet with a nutty finish.

Vezena peppers, botanically classified as Capsicum annuum, are a rare heirloom variety native to Eastern Europe that grows on small plants reaching just under one meter in height. Also known as the Rezha Macedonian pepper, Vezeni Piperki, Vezenka, Vezanka, and Vezhenka, the name Vezena Piperka often translates to “engraved” or “embroidered,” a descriptor used to identify the pepper’s unique corked skin. Vezena peppers vary considerably in heat and average between 1,200-5,000 units on the Scoville Heat Scale, with some peppers carrying less capsaicin having a milder taste and some peppers carrying stronger heat similar to jalapeno. Vezena peppers are commonly used as decoration and are also dried and ground for use in spices such as paprika.

Vezena peppers are best suited for both raw and cooked applications such as grilling and roasting. They can be chopped, diced, and incorporated into salsas or they can be roasted or boiled and used in marmalades and spreads. Vezena peppers are also commonly dried and hung for extended use or ground into paprika and chile salt. They can also be pickled or smoked for an added flavor. Vezena peppers pair well with savory foods, omelets, onion, garlic, sour cream, yogurt, meats such as poultry, pork, beef, and fish, creamy sauces, rice, potatoes, goulash, and boiled or steamed vegetables. They will keep up to one week when stored in a paper bag in the crisper drawer of the refrigerator. Vezena peppers have extremely thin skin and will dry out quickly if left in a dry, warm environment.

In Serbia, Vezena peppers are often hung in large clusters around homes and are dried naturally in the autumn sun. The peppers are then left as decoration or are used for grinding into spices and powders. Vezena peppers have been grown in Serbia for hundreds of years, and the Serbian farmers search for the fruits with the most corking striations and collect the seeds as these peppers are considered the most valuable to grow.

Vezena peppers are native to Eastern Europe, specifically to Serbia. The exact origins are unknown, but these peppers are believed to have been cultivated for hundreds of years and are also found in Albania, Yugoslavia, and other select areas in the Balkan region.