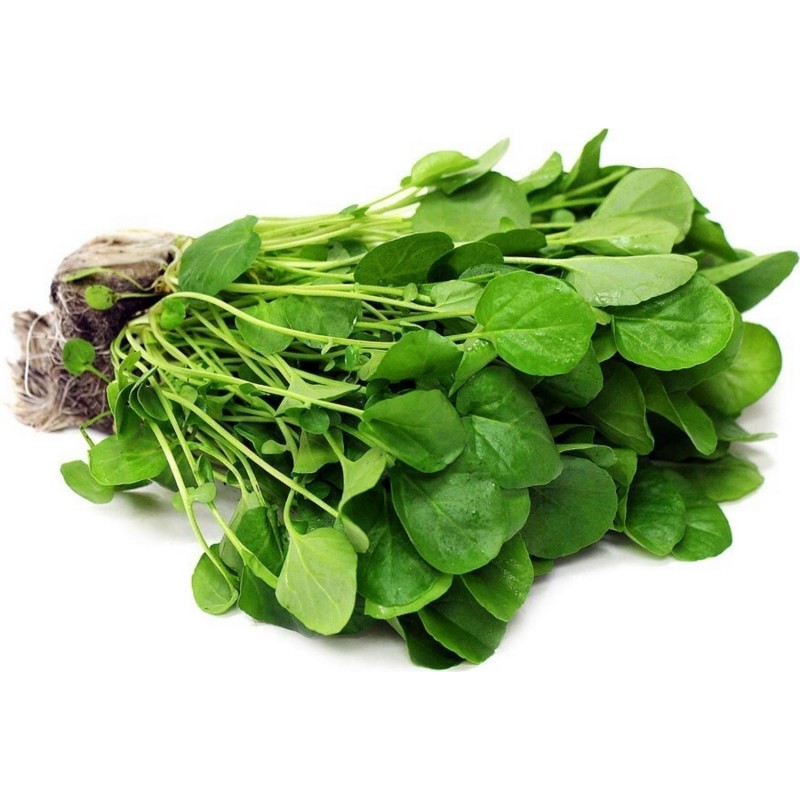 Watercress, with the botanical name Nasturtium officinale, is a rapidly growing, aquatic or semi-aquatic, perennial plant native to Europe and Asia, and one of the oldest known leaf

Watercress, with the botanical name Nasturtium officinale, is a rapidly growing, aquatic or semi-aquatic, perennial plant native to Europe and Asia, and one of the oldest known leaf vegetables consumed by humans. It is currently a member of the family Brassicaceae, botanically related to garden cress, mustard, radish and wasabi-all noteworthy for their piquant flavor.

The hollow stems of watercress are floating, and the leaves are pinnately compound. Small, white and green flowers are produced in clusters.

Nasturtium nasturtium-aquaticum (nomenclaturally invalid) and Sisymbrium nasturtium-aquaticum L. are synonyms of N. officinale. Watercress is also listed in some sources as belonging to the genus Rorippa, although molecular evidence shows the aquatic species with hollow stems are more closely related to Cardamine than Rorippa. Despite the Latin name, watercress is not particularly closely related to the flowers popularly known as nasturtiums (Tropaeolum majus); T. majus belongs to the family Tropaeolaceae, a sister taxon to the Brassicaceae within the order Brassicales.

Cultivation of watercress is practical on both a large-scale and a garden-scale. Being semi-aquatic, watercress is well-suited to hydroponic cultivation, thriving best in water that is slightly alkaline. It is frequently produced around the headwaters of chalk streams. In many local markets, the demand for hydroponically grown watercress exceeds supply, partly because cress leaves are unsuitable for distribution in dried form, and can only be stored fresh for a short period.

Watercress can be sold in supermarkets in sealed plastic bags, containing a little moisture and lightly pressurised to prevent crushing of contents. This has allowed national availability with a once-purchased storage life of one to two days in chilled/refrigerated storage.

Also sold as sprouts, the edible shoots are harvested days after germination. If unharvested, watercress can grow to a height of 50–120 centimetres (1.6–3.9 ft). Like many plants in this family, the foliage of watercress becomes bitter when the plants begin producing flowers.

In some regions, watercress is regarded as a weed, in other regions as an aquatic vegetable or herb. Watercress has been grown in many locations around the world.

In the United Kingdom, watercress was first commercially cultivated in 1808 by the horticulturist William Bradbery, along the River Ebbsfleet in Kent. Watercress is now grown in a number of counties of the United Kingdom, most notably Hertfordshire, Hampshire, Wiltshire and Dorset. The town of Alresford, near Winchester, holds a Watercress Festival that brings in more than 15,000 visitors every year, and a preserved steam railway line has been named after the local crop. In recent years,[when?] watercress has become more widely available in the UK, at least in the southeast; it is stocked pre-packed in some supermarkets, as well as fresh by the bunch at farmers' markets and greengrocers.

In the United States in the 1940s, Huntsville, Alabama, was locally known as the "watercress capital of the world" with Alresford in the U.K. is considered to be that nation's watercress capital.

Watercress contains significant amounts of iron, calcium, iodine, manganese, and folic acid, in addition to vitamins A, B6, C, and K. Because it is relatively rich in vitamin C, watercress was suggested (among other plants) by English military surgeon John Woodall (1570–1643) as a remedy for scurvy. Watercress is also a significant source of omega-3 fatty acids primarily in the form of 16:3n-3(Hexadecatrienoic acid) at 45 mg/100g.

Many benefits from eating watercress are claimed, such as that it acts as a stimulant, a source of phytochemicals and antioxidants, a diuretic, an expectorant, and a digestive aid.[6] It also appears to have antiangiogenic cancer-suppressing properties; it is widely believed to help defend against lung cancer. The content of phenethyl isothiocyanate (PEITC) in watercress inhibits HIF, which can inhibit angiogenesis.

Watercress crops grown in the presence of manure can be a haven for parasites such as the liver fluke Fasciola hepatica.[11] Watercress is a known inhibitor of the cytochrome P450 CYP2E1, which may result in altered drug metabolism for individuals on certain medications such as chlorzoxazone.