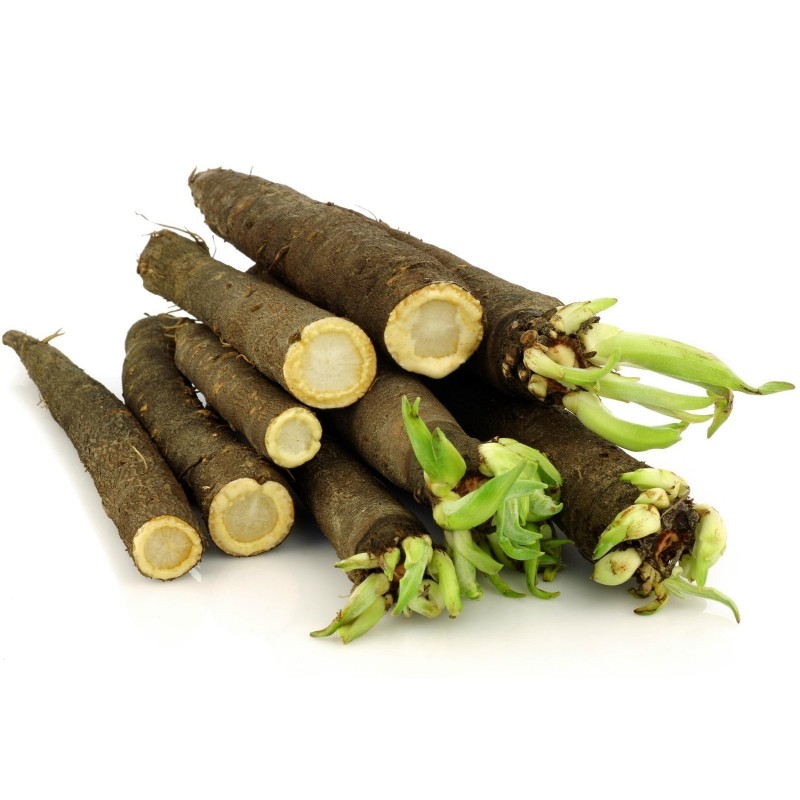 The scorzonera sweet is a crystallized dessert made from scorzonera in Évora, Alentejo, Portugal. It is listed on the Ark of Taste.

The black salsify plant has heads of yellow ray flowers. The thin black taproot grows up to one meter long and up to 2 centimetres (0.8 in) in diameter. It has a black skin with white internal flesh.

Black salsify is native to Southern Europe and the Near East. As is indicated by its binomial name, it is generally thought to have spread to the rest of Europe from Spain, but the first mention of the vegetable by a Western writer came from Leonhard Rudolf, who reported seeing scorzonera at the market of Aleppo in Syria, in 1575. Although it is often claimed that the name of the genus Scorzonera probably derives from the Old French word scorzon, meaning snake (or "adder" to be exact), it is more likely that the name is derived from the Italian "scorza negra" meaning "black bark"/"black peel" and obviously indicating the dark brown to black skin of the root. The Celtic and Germanic peoples are believed to have eaten the black salsify, which was considered efficacious against the bubonic plague and snake bites until the 16th century. The plant was being cultivated as a vegetable in Italy and France by 1660 and, soon after, the Belgians were growing vast fields of it.

The black salsify is considered nutritious: it contains proteins, fats, asparagine, choline, laevulin, as well as minerals such as potassium, calcium, phosphorus, iron, sodium, and vitamins A, B1, E and C. It also contains the glycoside inulin, conferring a mild sweetness that is suitable for diabetics.

The thick black skin of the salsify root is usually considered inedible and can be removed either prior to or after boiling. If the skin is removed prior to boiling, the peeled root should be immediately immersed in water mixed with vinegar or lemon juice, in order to prevent discolouring. Since the root contains an extremely sticky latex, it is often more convenient to peel it after boiling the root for 20 to 25 minutes (or less).

Black salsify is often eaten together with other vegetables, such as peas and carrots. But it is also popular served like asparagus in a white sauce, such as bechamel sauce or mustard sauce. Boiled salsify roots may also be coated with batter and deep fried.

Black salsify is hitherto mainly a European crop. Belgium, France and the Netherlands are the world's largest producers of black salsify; significant amounts are also produced in Germany. In the latter country, 'Hoffmanns Schwarzer Pfahl' is a cultivar widely used by commercial growers, while 'Duplex' is popular among small-scale gardeners. Some other cultivars are widely available, but because it was rather a localized crop before being produced for a wider market there are comparatively few landraces.

Harvesting is somewhat complicated, as the roots are quite fragile, and broken material loses freshness. Entire roots will keep fresh all winter if stored in a cool dark place, due to their robust black corky skin. In root cellars they may keep fresh well into springtime. It is, however, very hardy and will grow well in most cool-temperate climates and usually yield 15–20 metric tons of roots per hectare. In British gardens it is common to profit from its perennial character by leaving it in the ground until its roots have grown to sufficient size for harvesting; this can take two years. Commercially, it can be grown best as the year's second crop of a field.