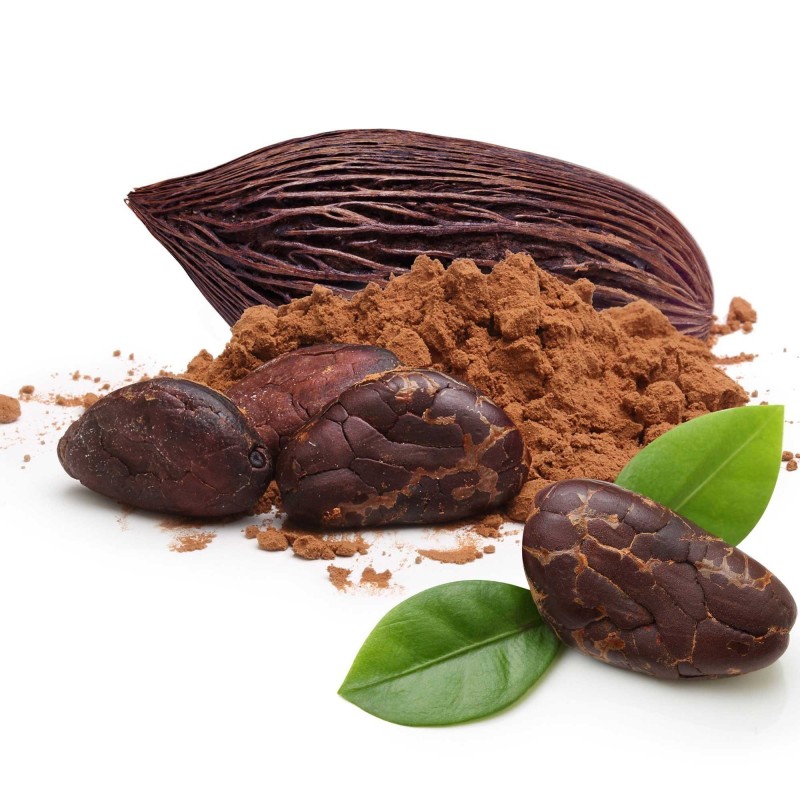 As you can see from our pictures, our cocoa variety is larger than all others. Theobroma cacao also cacao tree and cocoa tree is a small (4–8 m (13–26 ft) tall) evergreen tree in the family Malvaceae

As you can see from our pictures, our cocoa variety is larger than all others.

Theobroma cacao also cacao tree and cocoa tree, is a small (4–8 m (13–26 ft) tall) evergreen tree in the family Malvaceae, native to the deep tropical region of America. Its seeds are used to make cocoa powder and chocolate.

Leaves are alternate, entire, unlobed, 10–40 cm (3.9–16 in) long and 5–20 cm (2.0–7.9 in) broad. The flowers are produced in clusters directly on the trunk and older branches; this is known as cauliflory. The flowers are small, 1–2 cm (0.39–0.79 in) diameter, with pink calyx. While many of the world's flowers are pollinated by bees (Hymenoptera) or butterflies/moths (Lepidoptera), cacao flowers are pollinated by tiny flies, Forcipomyia midges in the order Diptera.[2] The fruit, called a cacao pod, is ovoid, 15–30 cm (5.9–12 in) long and 8–10 cm (3.1–3.9 in) wide, ripening yellow to orange, and weighs about 500 g (1.1 lb) when ripe. The pod contains 20 to 60 seeds, usually called "beans", embedded in a white pulp. The seeds are the main ingredient of chocolate, while the pulp is used in some countries to prepare a refreshing juice. Each seed contains a significant amount of fat (40–50%) as cocoa butter. Their most noted active constituent is theobromine, a compound similar to caffeine.

Cacao (Theobroma cacao) belongs to the genus Theobroma classified under the subfamily Sterculioidea of the mallow family Malvaceae. Cacao is one of 22 species of Theobroma.

The generic name is derived from the Greek for "food of the gods"; from θεος (theos), meaning "god," and βρῶμα (broma), meaning "food".

The specific name cacao is derived from the native name of the plant in indigenous Mesoamerican languages. The cacao was known as kakaw in Tzeltal, K’iche’ and Classic Maya; kagaw in Sayula Popoluca; and cacahuatl[dubious – discuss] in Nahuatl.

The cupuaçu, Theobroma grandiflorum, is a closely related species also grown in Brazil. Like the cacao, it is also the source for a kind of chocolate known as cupulate or cupuaçu chocolate.

The cupuaçu is considered of high potential by the food and cosmetics industries.

T. cacao is widely distributed from southeastern Mexico to the Amazon basin. There were originally two hypotheses about its domestication; one said that there were two foci for domestication, one in the Lacandon area of Mexico and another in lowland South America. More recent studies of patterns of DNA diversity, however, suggest that this is not the case. Motomayor et al.[4] sampled 1241 trees and classified them into 10 distinct genetic clusters. This study also identified areas, for example around Iquitos in modern Peru, where representatives of several genetic clusters originated. This result suggests that this is where T. cacao was originally domesticated, probably for the pulp that surrounds the beans, which is eaten as a snack and fermented into a mildly alcoholic beverage.[5] Using the DNA sequences obtained by Motomayor et al. and comparing them with data derived from climate models and the known conditions suitable for cacao, Thomas et al. have further refined the view of domestication, linking the area of greatest cacao genetic diversity to a bean-shaped area that encompasses the border between Brazil and Peru and the southern part of the Colombian-Brazilian border.[6] Climate models indicate that at the peak of the last ice age 21,000 years ago, when habitat suitable for cacao was at its most reduced, this area was still suitable, and so provided a refugium for the species. Thomas et al. speculate that from there people took cacao to Mexico, where selection for the beans took place.

Cacao trees grow well as understory plants in humid forest ecosystems. This is equally true of abandoned cultivated trees, making it difficult to distinguish truly wild trees from those whose parents may originally have been cultivated.

Cultivation, use, and cultural elaboration of cacao were early and extensive in Mesoamerica. Ceramic vessels with residues from the preparation of cacao beverages have been found at archaeological sites dating back to the Early Formative (1900-900 BC) period. For example, one such vessel found at an Olmec archaeological site on the Gulf Coast of Veracruz, Mexico dates cacao's preparation by pre-Olmec peoples as early as 1750 BC. On the Pacific coast of Chiapas, Mexico, a Mokaya archaeological site provides evidence of cacao beverages dating even earlier, to 1900 BC. The initial domestication was probably related to the making of a fermented, thus alcoholic beverage.

Several mixtures of cacao are described in ancient texts, for ceremonial or medicinal, as well as culinary, purposes. Some mixtures included maize, chili, vanilla (Vanilla planifolia), and honey. Archaeological evidence for use of cacao, while relatively sparse, has come from the recovery of whole cacao beans at Uaxactun, Guatemala and from the preservation of wood fragments of the cacao tree at Belize sites including Cuello and Pulltrouser Swamp. In addition, analysis of residues from ceramic vessels has found traces of theobromine and caffeine in early formative vessels from Puerto Escondido, Honduras (1100-900 BC) and in middle formative vessels from Colha, Belize (600-400 BC) using similar techniques to those used to extract chocolate residues from four classic period (circa 400 AD) vessels from a tomb at the archaeological site of Rio Azul. As cacao is the only known commodity from Mesoamerica containing both of these alkaloid compounds, it seems likely these vessels were used as containers for cacao drinks. In addition, cacao is named in a hieroglyphic text on one of the Rio Azul vessels. Cacao was also believed to be ground by the Aztecs and mixed with tobacco for smoking purposes