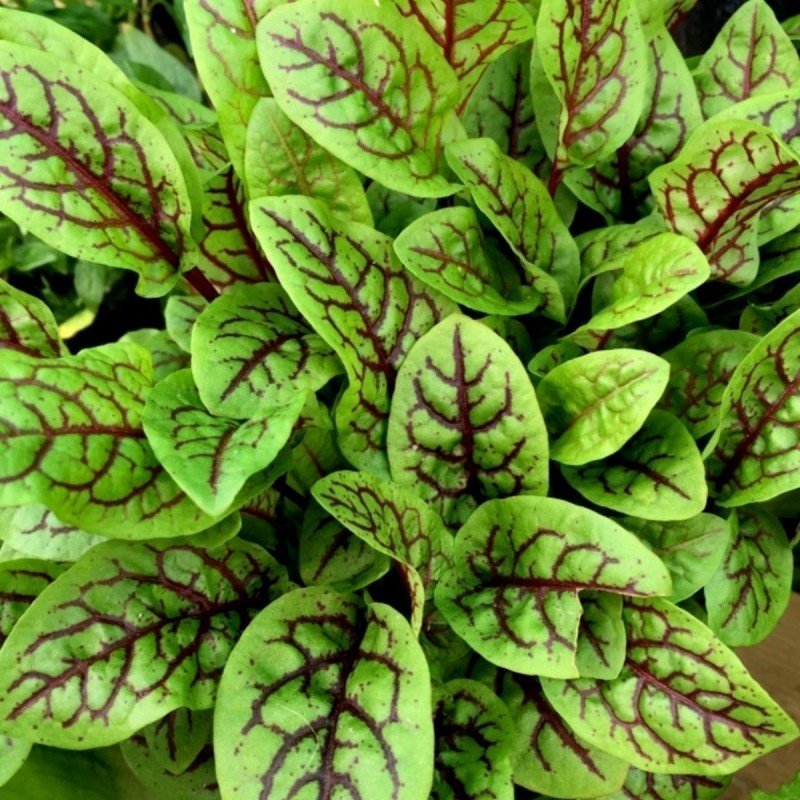 Of the two kinds of Sorrel cultivated for use as vegetables or salads, Rumex acetosa, the Garden Sorrel, is an indigenous English plant, common, too in the greater part of Europe, in almost all soils and situations. It grows abundantly in meadows, a slender plant about

Of the two kinds of Sorrel cultivated for use as vegetables or salads, Rumex acetosa, the Garden Sorrel, is an indigenous English plant, common, too in the greater part of Europe, in almost all soils and situations. It grows abundantly in meadows, a slender plant about 2 feet high, with juicy stems and leaves, and whorled spikes of reddish-green flowers, which give colour, during the months of June and July, to the grassy spots in which it grows.

It is generally found in pastures where the soil contains iron.

The leaves are oblong, the lower ones 3 to 6 inches in length, slightly arrow-shaped at the base, with very long petioles. The upper ones are sessile. They frequently become a beautiful crimson.

As the flowers increase in size, they become a purplish colour. The stamens and pistils are on different plants. The seeds, when ripe, are brown and shining. The perennial roots run deeply into the ground.

Sorrel is well known for the grateful acidity of its herbage, which is most marked when the plant is in full season, though in early spring it is almost tasteless.

The plant is also called 'Cuckoo's-meate' from an old belief that the bird cleared its voice by its agency. In Scotland it is 'gowkemeat.'

Domestic animals are fond of this and other species of Sorrel. The leaves contain a considerable quantity of binoxalate of potash, which gives them their acid flavour and medicinal and dietetic properties. They have been employed from the most distant time as a salad. In France, Sorrel is put into ragouts, fricassées and soups, forming the chief constituent of the favourite Soupe aux herbes.

In the time of Henry VIII, this plant was held in great repute in England, for table use, but after the introduction of French Sorrel, with large succulent leaves, it gradually lost its position as a salad and a potherb, and for many years it has ceased to be cultivated.

John Evelyn thought that Sorrel imparted 'so grateful a quickness to the salad that it should never be left out.' He wrote in 1720:

'Sorrel sharpens the appetite, assuages heat, cools the liver and strengthens the heart; is an antiscorbutic, resisting putrefaction and in the making of sallets imparts a grateful quickness to the rest as supplying the want of oranges and lemons. Together with salt, it gives both the name and the relish to sallets from the sapidity, which renders not plants and herbs only, but men themselves pleasant and agreeable.

'Sorrel is prevalent in all hot diseases, to cool any inflammation and heat of blood in agues pestilential or choleric, or sickness or fainting, arising from heat, and to refresh the overspent spirits with the violence of furious or fiery fits of agues: to quench thirst, and procure an appetite in fainting or decaying stomachs: For it resists the putrefaction of the blood, kills worms, and is a cordial to the heart, which the seed doth more effectually, being more drying and binding.... Both roots and seeds, as well as the herb, are held powerful to resist the poison of the scorpion. . . . The leaves, wrapt in a colewort leaf and roasted in the embers, and applied to a large imposthume, botch boil, or plague-sore, doth both ripen and break it. The distilled water of the herb is of much good use for all the purposes aforesaid.'

In this country, the leaves are now rarely eaten, unless by children and rustics, to allay thirst, though in Ireland they are still largely consumed by the peasantry with fish and milk. Our country people used to beat the herb to a mash and take it mixed with vinegar and sugar, as a green sauce with cold meat, hence one of its popular names: Greensauce.

Because of their acidity, the leaves, treated as spinach, make a capital dressing with stewed lamb, veal or sweetbread. A few of the leaves may also with advantage be added to turnips and spinach. When boiled by itself, without water, it serves as an excellent accompaniment to roast goose or pork, instead of apple sauce.

'To Stew Sorrel for Fricandean and Roast Meat.

'Wash the Sorrel, and put it into a silver vessel, or stone jar, with no more water than hangs to the leaves. Simmer it as slow as you can, and when done enough, put a bit of butter and beat it well.'

Unless cooked carefully, Sorrel is likely to disagree with gouty persons, from the acid oxalate of potash it contains, but this may be got rid of if it is plunged for two or three minutes in boiling water, before cooking, this first water being then thrown away.

In Scandinavia, Sorrel has sometimes been used in time of scarcity to put into bread. The leaves contain a little starch and mucilage, and the root is rather farinaceous.

The juice of the leaves will curdle milk as well as rennet, and the Laplanders use it as a substitute for the latter.

The dried root affords a beautiful red colour when boiled and used for making barley water look like red wine, when in France they wish to avoid giving anything of a vinous nature to the sick.

The salt of Sorrel, binoxalate of potash, is much used for bleaching straw and removing ink stains from linen, and is often sold in the shops under the name of 'essential salt of lemons.'

The finest plants are propagated from seed, sown in March, though it may be sown in any of the spring months. Sow moderately thin, in drills 6 inches apart, and thin out when the plants are 1 or 2 inches high. When the stalks run up in July, they should be cut back. The roots will then put out new leaves, which will be tender and better for kitchen use than the older leaves, so that by cutting down the shoots of some plants at different times, there will always be a supply of young leaves.

Both varieties are generally increased by dividing the roots, which may be done either in spring or autumn, the roots being planted about a foot apart each way, and watered.

The leaves both dried and fresh.

The sour taste of Sorrel is due to the acid oxalate of potash it contains; tartaric and tannic acids are also present.

The medicinal action of Sorrel is refrigerant and diuretic, and it is employed as a cooling drink in all febrile disorders.

It is corrective of scrofulous deposits: for cutaneous tumours, a preparation compounded of burnt alum, citric acid, and juice of Sorrel, applied as a paint, has been employed with success.

Sorrel is especially beneficial in scurvy.

Both the root and the seed were formerly esteemed for their astringent properties, and were employed to stem haemorrhage.

A syrup made with the juice of Fumitory and Sorrel had the reputation of curing the itch, and the juice, with a little vinegar, was considered a cure for ringworm, and recommended as a gargle for sore throat.

A decoction of the flowers, made with wine, was said to cure jaundice and ulcerated bowels, the root in decoction or powder being also employed for jaundice, and gravel and stone in the kidneys.

'The Sorrells are moderately cold and dry. Sorrell doth undoubtedly cool and mightily dry, but because it is sour, it likewise cutteth tough humours. The juice thereof in summer time is a profitable sauce in many meats and pleasant to the taste. It cooleth a hot stomach. The leaves are with good success added to decoctions, and are used in agues. The leaves are taken in good quantity, stamped and stained into some ale and cooleth the body. The leaves are eaten in a tart spinach. The seed of Sorrell drunk in wine stoppeth the bloody flow.'