Medicinal or spice plant
Plant resistant to cold and frost 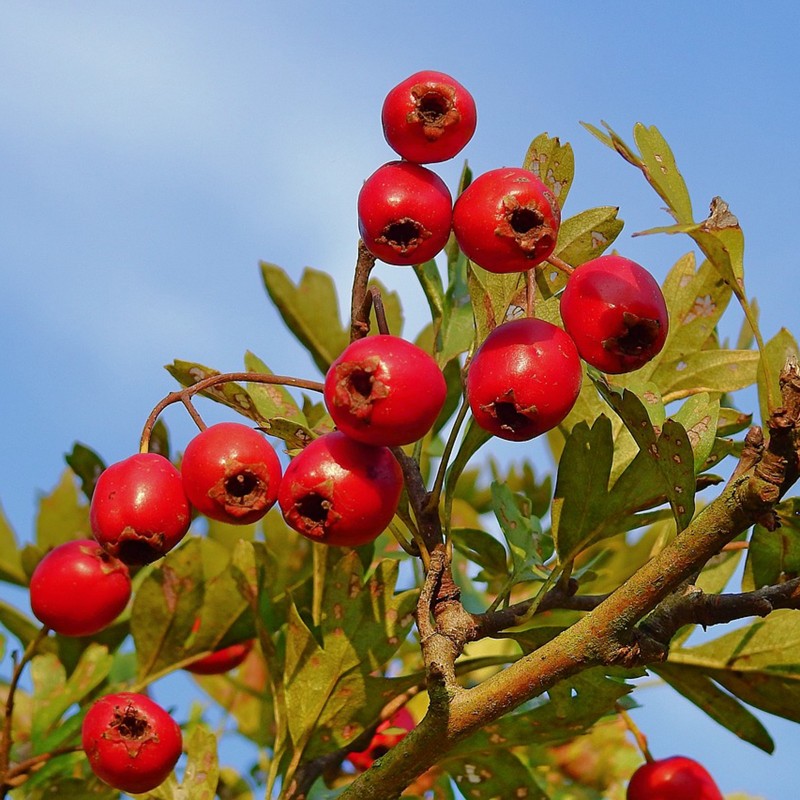 Crataegus /krəˈtiːɡəs/, commonly called hawthorn, thornapple, May-tree, whitethorn, or hawberry, is a large genus of shrubs and trees in the family Rosaceae, native to temperate regions of the Northern

Crataegus /krəˈtiːɡəs/, commonly called hawthorn, thornapple, May-tree, whitethorn, or hawberry, is a large genus of shrubs and trees in the family Rosaceae, native to temperate regions of the Northern Hemisphere in Europe, Asia and North America. The name "hawthorn" was originally applied to the species native to northern Europe, especially the common hawthorn C. monogyna, and the unmodified name is often so used in Britain and Ireland. The name is now also applied to the entire genus and to the related Asian genus Rhaphiolepis. The name haw, originally an Old English term for hedge, applies to the fruit.

Crataegus species are shrubs or small trees, mostly growing to 5–15 metres (16–49 ft) tall,[6] with small pome fruit and (usually) thorny branches. The most common type of bark is smooth grey in young individuals, developing shallow longitudinal fissures with narrow ridges in older trees. The thorns are small sharp-tipped branches that arise either from other branches or from the trunk, and are typically 1–3 cm long (recorded as up to 11.5 centimetres (4.5 in) in one case[6]). The leaves grow spirally arranged on long shoots, and in clusters on spur shoots on the branches or twigs. The leaves of most species have lobed or serrate margins and are somewhat variable in shape. The fruit, sometimes known as a "haw", is berry-like but structurally a pome containing from 1 to 5 pyrenes that resemble the "stones" of plums, peaches, etc., which are drupaceous fruit in the same subfamily.

Hawthorns provide food and shelter for many species of birds and mammals, and the flowers are important for many nectar-feeding insects. Hawthorns are also used as food plants by the larvae of a large number of Lepidoptera species; see List of Lepidoptera that feed on hawthorns. Haws are important for wildlife in winter, particularly thrushes and waxwings; these birds eat the haws and disperse the seeds in their droppings.

The fruits of the species Crataegus pinnatifida (Chinese hawthorn) are tart, bright red, and resemble small crabapple fruits. They are used to make many kinds of Chinese snacks, including haw flakes and tanghulu (糖葫芦). The fruits, which are called shānzhā (山楂) in Chinese, are also used to produce jams, jellies, juices, alcoholic beverages, and other drinks [1]. In South Korea, a liquor called sansachun (산사춘) is made from the fruits.

The fruits of Crataegus mexicana are known in Mexico as tejocotes and are eaten raw, cooked, or in jam during the winter months. They are stuffed in the piñatas broken during the traditional pre-Christmas celebration known as Las Posadas. They are also cooked with other fruits to prepare a Christmas punch. The mixture of tejocote paste, sugar, and chili powder produces a popular Mexican candy called rielitos, which is manufactured by several brands.

In the southern United States fruits of three native species are collectively known as mayhaws and are made into jellies which are considered a great delicacy. In Iran, the fruits of Crataegus (including Crataegus azarolus var. aronia, as well as other species) are known as zalzalak and are eaten raw as a snack, or made into a jam known by the same name.

The leaves are edible and, if picked in spring when still young, are tender enough to be used in salads.

On Manitoulin Island in Canada, some red-fruited species are called hawberries. They are common there thanks to the island's alkaline soil. During the pioneer days, white settlers ate these fruits during the winter as the only remaining food supply. People born on the island are now called "haweaters".

Many species and hybrids are used as ornamental and street trees. The common hawthorn is extensively used in Europe as a hedge plant. Several cultivars of the Midland hawthorn C. laevigata have been selected for their pink or red flowers. Hawthorns are among the trees most recommended for water conservation landscapes.

Several species of hawthorn have been used in traditional medicine, and there is considerable interest in testing hawthorn products for evidence-based medicine. The products being tested are often derived from C. monogyna, C. laevigata, or related Crataegus species, "collectively known as hawthorn",[8] not necessarily distinguishing between these species, which are very similar in appearance.[6] The dried fruits of Crataegus pinnatifida (called shān zhā in Chinese) are used in naturopathic medicine and traditional Chinese medicine, primarily as a digestive aid. A closely related species, Crataegus cuneata (Japanese hawthorn, called sanzashi in Japanese) is used in a similar manner. Other species (especially Crataegus laevigata) are used in herbal medicine where the plant is believed to strengthen cardiovascular function.

Active ingredients found in hawthorn include tannins, flavonoids (such as vitexin, rutin, quercetin, and hyperoside), oligomeric proanthocyanidins (OPCs, such as epicatechin, procyanidin, and particularly procyanidin B-2), flavone-C, triterpene acids (such ursolic acid, oleanolic acid, and crataegolic acid), and phenolic acids (such as caffeic acid, chlorogenic acid, and related phenolcarboxylic acids). Standardization of hawthorn products is based on content of flavonoids (2.2%) and OPCs (18.75%).

A 2008 Cochrane Collaboration meta-analysis of previous studies concluded that there is evidence of "a significant benefit in symptom control and physiologic outcomes" for an extract of hawthorn in treating chronic heart failure.[14] A 2010 review[15] concluded that "Crataegus [hawthorn] preparations hold significant potential as a useful remedy in the treatment of cardiovascular disease (CVD)". The review indicated the need for further study of the best dosages and concluded that although "many different theoretical interactions between Crataegus and orthodox medications have been postulated ... none have [yet] been substantiated.[15]

In the 2004 HERB-CHF (Hawthorn Extract Randomized Blinded Chronic HF Study) clinical study, 120 patients took 450 mg of hawthorn extract twice daily for six months in combination with standard therapy and a standardized exercise program. "No effects of hawthorn were seen on either quality-of-life endpoint (Tables 1 and 2), or when adjusted for LVEF".

The wood of some hawthorn species is very hard and resistant to rot. In rural North America it was prized for use as tool handles and fence posts.

Hawthorn can also be used as a rootstock in the practice of grafting. It is graft-compatible with Mespilus (medlar), and with pear, and makes a hardier rootstock than quince, but the thorny suckering habit of the hawthorn can be problematic.[6]

Seedlings of Crataegus monogyna have been used to graft multiple species on the same trunk, such as Pink hawthorn, pear tree and medlar, the result being trees which give pink and white flowers in May and fruits during the summer. "Chip budding" has also been performed on hawthorn trunks in order to have branches of several varieties on the same tree. Such trees can be seen in Vigo, Spain, and in the northwest of France (mainly in Brittany).

The saying "Ne'er cast a cloot til Mey's oot" conveys a warning not to shed any cloots (clothes) before the summer has fully arrived and the may flowers (hawthorn blossoms) are in full bloom.

The custom of employing the flowering branches for decorative purposes on 1 May is of very early origin; but since the adoption of the Gregorian calendar in 1752, the tree has rarely been in full bloom in England before the second week of that month. In the Scottish Highlands the flowers may be seen as late as the middle of June. The hawthorn has been regarded as the emblem of hope, and its branches are stated to have been carried by the ancient Greeks in wedding processions, and to have been used by them to deck the altar of Hymenaios. The supposition that the tree was the source of Jesus's crown of thorns doubtless gave rise around 1911 to the tradition among the French peasantry that it utters groans and cries on Good Friday, and probably also to the old popular superstition in Great Britain and Ireland that ill-luck attended the uprooting of hawthorns. Branches of Glastonbury Thorn, (C. monogyna 'Biflora',[6] sometimes called C. oxyacantha var. praecox), which flowers both in December and in spring, were formerly highly valued in England, on account of the legend that the tree was originally the staff of Joseph of Arimathea.

Robert Graves, in his book The White Goddess.[5] traces and reinterprets many European legends in which the whitehorn (hawthorn), also called the May-tree, is central.

In Celtic lore, the hawthorn plant was used commonly for inscriptions[citation needed] along with Yew and Apple. It was once said to heal the broken heart. In Ireland, the red fruit is, or was in living memory[citation needed], called the Johnny MacGorey or Magory.

Serbian and Croatian folklore notes hawthorn (Serbian глог / glog, Croatian glog) is particularly deadly to vampires, and stakes used for their slaying must be made from the wood of the thorn tree

In Gaelic folklore, hawthorn (in Scottish Gaelic, Sgitheach and in Irish, sceach) 'marks the entrance to the otherworld' and is strongly associated with the fairies.[24] Lore has it that it is very unlucky to cut the tree at any time other than when it is in bloom; however, during this time it is commonly cut and decorated as a May Bush (see Beltane).[25] This warning persists to modern times; it has been questioned by folklorist Bob Curran whether the ill luck of the De Lorean Motor Company was associated with the destruction of a fairy thorn to make way for a production facility.

Hawthorn trees are often found beside clootie wells; at these types of holy wells they are sometimes known as 'rag trees', for the strips of cloth which are tied to them as part of healing rituals. 'When all fruit fails, welcome haws' was once a common expression in Ireland.

The number of species in the genus depends on taxonomic interpretation. Some botanists in the past recognised a thousand or more species,[30] many of which are apomictic microspecies. It is estimated that a reasonable number is 200 species,[6] but it is not yet clear how many species should be recognized because "a large portion of the synonymy, especially in North American Crataegus, has not been worked out.